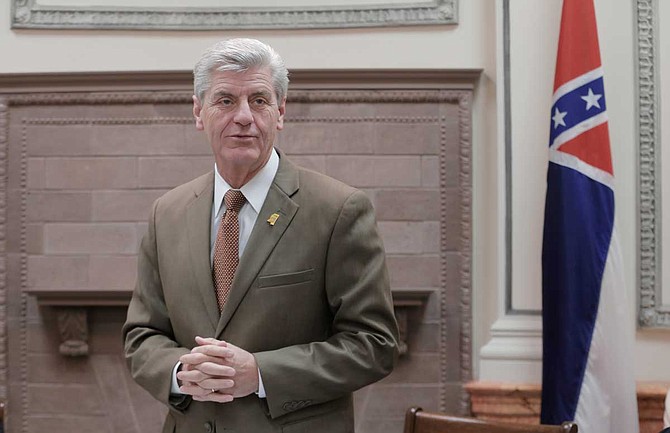 JACKSON — Mississippi Gov. Phil Bryant declared that April is the "Month of Unity" in Mississippi, departing from past years when he declared April "Confederate Heritage Month."

He made the declaration at the behest of Unite Mississippi, a Flowood-based nonprofit that focuses on racial and social reconciliation among Mississippi's Christians. On Monday, the group announced Bryant's declaration, as well as their "A Night of Unity Event," which they described as a worship concert and "crusade" that will take place at the Mississippi Veterans Memorial Stadium on April 27.

Within an hour of Unite Mississippi's announcement, though, Bryant launched a Twitter salvo, accusing Columbus-based Commercial Dispatch columnist Slim Smith of "a cowardly act of hate" and "a new low in racial politics."

Last week, Smith compared Mississippi State Auditor Shad White, whom Bryant appointed, to the segregationist Citizens' Council after White released a study that some education advocates saw as an attack on public schools. During the 1960s and '70s, the Council notoriously fought orders for public schools to desegregate by attacking the schools and pushing for state funds for all-white private schools.

On Monday, Democratic Mississippi state Rep. Jeramey Anderson, who is an African American from Moss Point, criticized Bryant's "Month of Unity" proclamation. In a press statement, he called the move "hollow," and pointed out Bryant's history of declaring April Confederate Heritage Month.

"I welcome Unity Month, but if the governor truly wants to unify the people of Mississippi, he would show it by joining the battle to give Mississippi a more unifying flag," Anderson said, referring to the fact that Bryant opposes changing the state flag to remove its Confederate imagery. "The present flag only serves to remind African Americans in this state that the state once allowed their ancestors to be held as slaves and the state allied itself with those who sought to destroy the United States of America, warring against it to preserve slavery."

Two days after the April 27 unity rally, Mississippi will celebrate Confederate Memorial Day—a holiday recognized by just a handful of southern states. Mississippi, Anderson pointed out in his statement, also celebrates Robert E. Lee Day every January on the same day as Martin Luther King, Jr. Day. Lee was a Confederate general and slave owner known for his cruelty.

"This year, once again, Mississippi will celebrate Confederate Memorial Day, honoring those who fought to keep my ancestors in bondage," Anderson said in his statement on Monday. "Against that backdrop, a unity proclamation rings hollow given how little the governor and the Republican legislative leadership has actually done to achieve it. Gov. Bryant, give us a flag we can rally behind."

After the U.S. House and Senate finally passed the legislation and Trump signed it into law, Bryant praised only the Republican president and senators.

Thompson responded the same day with a tweet of his own.

"Give adequate credit," Thompson wrote. "I've worked on this for 16 years."

Bryant drew criticism from across the country for the slight. Instead of owning up to his oversight and crediting Thompson, though, he replied with a defiant statement and compared Thompson to the kind of hate that white supremacists directed at civil-rights leaders like Evers.

"It's sad that Congressman Thompson so desires personal acclaim that he shatters what should be a time of celebration for all Mississippians with this designation," he said. "His anger and hatred are the very characteristics that separated our people in the civil-rights era. He has become a tragic figure who has squandered this opportunity to help bring our state together."

Bryant has longrunning ties with segregationist and neo-Confederate groups. In high school, he attended a segregation academy that the racist Citizens' Council, known colloquially as the "White Citizens Council," started.

He is a member of the Sons of Confederate Veterans, an organization known for its efforts to revise history with false claims that the Civil War was fought over "state's rights," and not slavery. The group recently gave Bryant the John J. Pettus Heritage Award, named for Mississippi's virulently racist, slave-holding governor who led the state in secession.

The Jackson Free Press revealed in February 2016 that Bryant was quietly declaring April "Confederate Heritage Month" annually, but with no mention of slavery, the cause of the war. He did it again in 2017.

At the opening of the Mississippi Civil Rights Museum last year, the governor created a firestorm when he invited Trump to speak at the event, but not Barack Obama, America's first black president. Also in attendance was Evers-Williams, who was at home with their children when he was assassinated and went on to become a major civil-rights activist in her own right after his death. During the opening, U.S. Sen. Roger Wicker even called former Confederate President Jefferson Davis a hero.

On Easter, the day before the "Month of Unity" announcement, Bryant affirmed Fox News host Britt Hume's latest criticism of Obama. After Obama called the attacks on "Easter worshippers in Sri Lanka ... an attack on humanity," Hume mocked him.