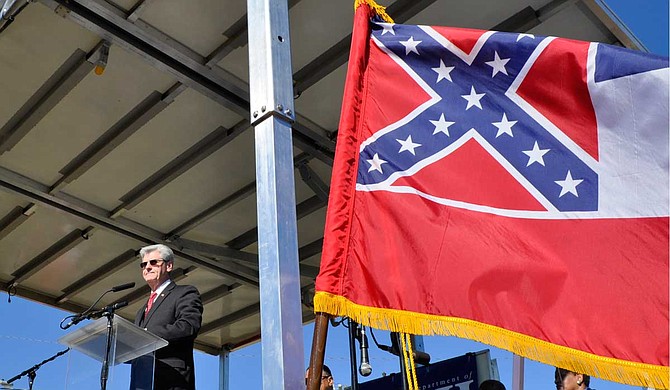 Gov. Phil Bryant spoke at the groundbreaking of Mississippi's Civil Rights Museum in 2013, joined by Myrlie Evers-Williams, who was the wife of slain civil-rights activist Medgar Evers. On March 14, 2019, he credited Mississippi's two white Republican U.S. senators for a law declaring the Evers' home a national monument, but did not credit Rep. Bennie Thompson, a black Democrat who pushed for the law for 16 years. File Photo by Trip Burns

For years, Democratic Rep. Bennie Thompson has introduced legislation to bring federal recognition and protections to the slain voting-rights activist's historic Jackson home, where white supremacist Byron de la Beckwith shot and killed him in his driveway in June 1963.

On Wednesday, though, after the U.S. House and Senate finally passed the legislation and Trump signed it into law, Bryant praised only the Republican president and senators.

Thompson responded the same day with a tweet of his own.

"Give adequate credit," Thompson wrote. "I've worked on this for 16 years."

Sixteen years is longer than Trump, Wicker and Hyde-Smith have each held their current offices. Trump has been president for a little more than two years, Wicker has been a senator for 12 years, and Hyde-Smith has held her seat for less than a year.

"Give adequate credit," Congressman Bennie Thompson wrote in a tweet to Gov. Phil Bryant. "I've worked on this for 16 years."

Wicker first supported efforts to study making the Evers home a national monument in 2015, when he co-sponsored a bill that Mississippi's former U.S. senator, Thad Cochran, introduced. Hyde-Smith first supported the effort last May, shortly after Bryant appointed her to the seat Cochran vacated.

Instead of owning up to his oversight and crediting Thompson, though, Bryant replied with a defiant statement on Thursday—and compared Thompson to the kind of hate that white supremacists directed at civil-rights leaders like Evers.

"It's sad that Congressman Thompson so desires personal acclaim that he shatters what should be a time of celebration for all Mississippians with this designation," he said. "His anger and hatred are the very characteristics that separated our people in the civil-rights era. He has become a tragic figure who has squandered this opportunity to help bring our state together."

"It's a shame that @PhilBryantMS is such an incompetent hatemonger," she wrote. "These comments are a shameful rewriting of history that absolves those truly responsible of their roles. Evers was murdered by a terrorist at his own home in front of his children."

Christine Pelosi, the daughter of Democratic Speaker of the House Nancy Pelosi, criticized Bryant in a tweet.

"That some would erase your credit is exactly WHY we need civil rights museums—so American history can be told by the people who made it," Pelosi wrote.

"Everyone who has followed this issue over the years KNOWS that @BennieGThompson was instrumental," former U.S. Secretary Mike Espy tweeted Wednesday. "Thanks, Congressman."

In 1986, Espy became the first black Democratic congressman from Mississippi since Reconstruction. After President Bill Clinton named him secretary of agriculture in 1993, Thompson took over as the representative from his district. Last year, Espy came closer to winning a U.S. Senate seat than any Mississippi Democrat since 1986. He ultimately lost to Hyde-Smith, but not until she made a comment about attending "a public hanging" that many interpreted as a reference to Mississippi's past as the state with the most lynchings of African Americans.

At the opening of the Mississippi Civil Rights Museum last year, Bryant created a firestorm when he invited Trump to speak at the event. Also in attendance was Evers' wife, Myrlie Evers-Williams, who was at home with their children when he was assassinated and went onto become a major civil-rights activist in her own right after his death. During the opening, Sen. Wicker even called former Confederate President Jefferson Davis a hero.

"Congressman @BennieGThompson has worked on this for years," Baria tweeted. "Why are you unable to thank the one member of the delegation who has spent years on this project who happens to be a Democrat? Your overt partisanship embarasses our state."

Mississippi State Rep. Jeremy Anderson, who in 2013 became the youngest elected black state lawmaker in the country, also chimed in.

"Governor, your #bias, #hatred, #delusions, and #AlternativeFacts are showing again. You may want to put those away. Take a step into reality, Gov," he wrote.

Bryant is known for his staunch support of the Mississippi state flag, which contains within its canton the emblem of the Confederacy. In high school, he attended a segregation academy, which was started by the racist Citizens' Council, known colloquially as the "White Citizens Council." He is a member of the Sons of Confederate Veterans, an organization known for its efforts to revise history with false claims that the Civil War was fought over "state's rights," and not slavery. The group recently gave Bryant the John J. Pettus Heritage Award, named for Mississippi's virulently racist, slave-holding governor who led the state in secession.

Thank you @BennieGThompson for your 16 years of work with Myrlie Evans to pass the Medgar Evers National Monument Act.

That *some* would erase you from credit is exactly WHY we need civil rights museums — so American history can be told by the people who made it! https://t.co/TQ3SC3H8kR

Christine Pelosi, the daughter of Democratic Speaker of the House Nancy Pelosi, criticized Bryant in a tweet.

The Jackson Free Press revealed in February 2016 that Bryant was quietly declaring April as "Confederate Heritage Month" annually, but with no mention of slavery, the cause of the war.

Thompson also introduced a resolution in the House in 2003 to recognize and commend Evers and Evers-Williams.