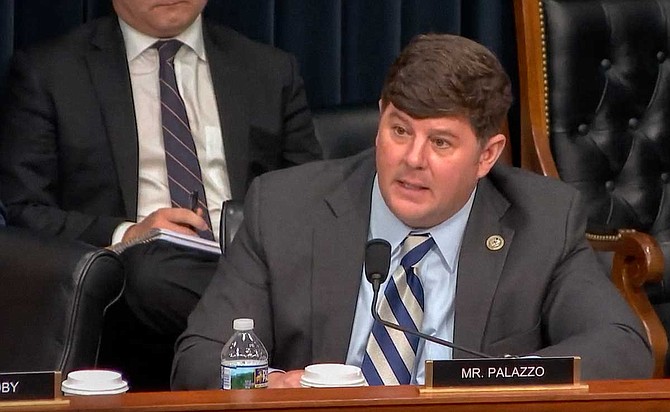 JACKSON — As President Trump wrangled with Congress over funding for his long-promised border wall, Mississippi Congressman Steven Palazzo introduced his own solution. Under his "Border Bonds for America Act," American citizens would pay to build a wall on the southern border by purchasing revenue bonds from the U.S. Treasury.

"This bill is a safe investment into the infrastructure and security of our country," the Republican 4th District congressman said in a press statement on Monday. He compared the proposed bonds to World War II-era war bonds that helped finance U.S. military efforts.

"This legislation would allow for the patriots of today's era to help support American security in the same way as previous generations," Palazzo said.

He described border bonds as "an alternate way for our citizens to support their values" and blamed Democrats for "inaction to secure our borders." Although Republicans have held both chambers of Congress since 2017, they have not voted to fund a border wall due to lack of support even among many legislators in Trump's own party.

Palazzo's bill has no co-sponsors and, along with Harris' bill, is unlikely to become law, especially with Democrats set to take over the House in January after resounding victories at the polls in last month's midterms.

Putting his name on such a bill, though, gives Palazzo a talking point he can use to argue that he fought for the wall when he faces Republican voters again in 2020.

Trump Amends 'Mexico Will Pay for the Wall' Claim

Even if Palazzo's bill did become law, it would still leave one of Trump's most oft-repeated promises about the wall unfulfilled. From the start of his presidential campaign and into his presidency, Trump promised supporters that Mexico—not American taxpayers—would pay to build a wall along the southern border.

"I would build a great wall, and nobody builds walls better than me, believe me, and I'll build them very inexpensively," Trump said when he announced his presidential run in June 2016. "I will build a great, great wall on our southern border, and I'll have Mexico pay for that wall."

In a White House meeting with Democratic congressional leaders earlier this month, though, Trump threatened to shut down the government if Congress would not fund the wall.

"If we don't get what we want one way or the other, whether it's through you, through a military, through anything you want to call, I will shut down the government, absolutely," Trump told Senate Minority Leader Chuck Schumer and Democratic House Leader Nancy Pelosi at the Dec. 11 meeting.

On Wednesday morning, though, Trump backed off his border-wall demands, and Republican Senate Majority Leader Mitch McConnell announced a short-term funding deal to keep the government open until Feb. 8. Congress will have to pass it, and Trump will have to sign it by Friday night to avoid a shutdown.

Just before the announcement, Trump tweeted out an amended version of his claim that Mexico would pay for the wall.

"Mexico is paying (indirectly) for the Wall through the new USMCA, the replacement for NAFTA!" Trump wrote on Twitter, referring to the United States-Mexico-Canada Agreement that leaders of the three countries signed on Nov. 30.

FactCheck.org examined the claim when Trump last made it on Dec. 13 and found no basis for it. Though USMCA replaces the North American Free Trade Agreement that President Bill Clinton signed into law in 1993, it keeps most of NAFTA intact, with minor changes.

"It represents an arguably slightly better deal for the U.S. than its predecessor, the North American Free Trade Agreement, experts told us, but not enough to translate to federal revenues that would pay for the border wall, and shouldn't be construed as Mexican payments, anyway," FactCheck.org's analysis reads.

Just outside El Paso, Texas, the U.S. is holding 2,800 undocumented migrant teenagers in the Tornillo facility at a cost of $1 million per day, the AP reports.

Rep. Judy Chu, D-Calif., who toured the facility called it "inhumane" and "a child prison" that "has no right to exist."

"It's in a remote location on purpose so that the American people do not know what's happening here," said Rep. Beto O'Rourke, D-Texas, who also toured the facility.