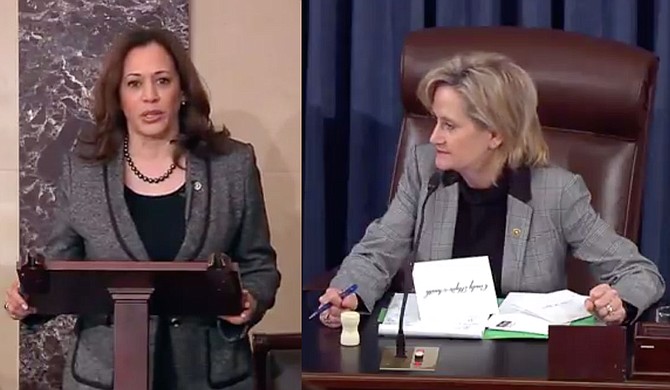 Congress has attempted to pass anti-lynching legislation more than 200 times over many decades. Several times, anti-lynching bills passed the House, only for southern senators to block them.

"This has been a long arc, a painful history and a shameful history in this body," Booker said from the Senate floor.

The bill's passage comes 13 years after the U.S. Senate passed a 2005 resolution "apologizing to the victims of lynching and the descendants of those victims for the failure of the Senate to enact anti-lynching legislation."

That resolution, which passed with unanimous consent, had 89 co-sponsors. Neither of Mississippi's U.S. Senators at the time—former Republican Sens. Thad Cochran and Trent Lott—were among the co-sponsors.

This time, the House may not have time to pass the bill and send it to the president's desk, but senators would likely reintroduce it next year if not.

Mississippi: The Most Lynchings

From 1882 to 1968, lynchings claimed the lives of 3,446 African Americans in the United States, making up nearly 73 percent of all lynchings in that period, NAACP data show. No state had more lynchings than Mississippi, where 581 lynchings took place in that period, followed by Georgia with 531.

Mississippi's bloody history and its most recent special election led some Twitter users to note the irony that it was Hyde-Smith who sat in front of the chamber as the vote took place. "If he invited me to a public hanging, I would be on the front row," she infamously told a crowd of supporters at a campaign event in November, referring to a farmer who came out to see her.

A national controversy erupted, engulfing her campaign in the two weeks before the runoff against former U.S. Secretary of Agriculture Mike Espy, a black Democrat. Although she won her race, it was the narrowest margin of victory for a Mississippi Republican in a U.S. Senate race since 1982.

Hyde-Smith later said the phrase was an "expression of regard" in a statement the day after the video surfaced and later offered a milquetoast apology in a debate with Espy a week before the Nov. 26 runoff election, but then blamed him for the controversy by accusing him of "twisting" her words for "personal" and "political gain."

Yet on Wednesday, Harris—who is only the second black woman to serve in the U.S. Senate—called it an honor to be on the floor with Hyde-Smith, the first woman Mississippi voters ever elected to serve in Congress.

"It is my true honor to be with you on the floor of the United States Senate, Madame President. Thank you," Harris said, nodding to her.

"The ayes do have it. The bill is amended as passed," Hyde-Smith said moments later, after calling for the vote to finally pass anti-lynching legislation 153 years after the Civil War ended and with it, the emancipation of slaves.

During the Senate campaign, Booker and Harris endorsed Espy, and made campaign stops for him in Mississippi.

Transgender Hate Crimes on the Rise

Transgender activists tracked the deaths of at least 55 transgender people in the United States caused by violence in 2017 and 2018, including two black trans women in Mississippi. Mesha Caldwell was found shot to death near Canton, Miss., in January 2017, and Diamond Stevens shot to death in Meridian, Miss., this June. Both cases were ruled homicides but remain unsolved.

In 2017, former Navy sailor Dwanya Hickerson pled guilty to the second degree murder and robbery of transgender nurse Dee Whigham of Hattiesburg, Miss., whom Hickerson admitted to stabbing 190 times in a St. Martin, Miss., hotel room in July 2016. As part of a plea deal, Hickerson was sentenced to 35 years for Whigham's murder, followed by eight years for robbery.

Hickerson told police he was on a date with Whigham and had just had sex with her when she revealed she was transgender. He said he "lost it."

While Mississippi is known for having the most lynchings of any state in the 85 years from 1882 to 1968, it is also the home of the first two African Americans to serve in the U.S. Senate in history: Hiram Revels became the first in 1870, and Blanche K. Bruce the second in 1875. But no African American has been elected to statewide officer since Reconstruction ended.