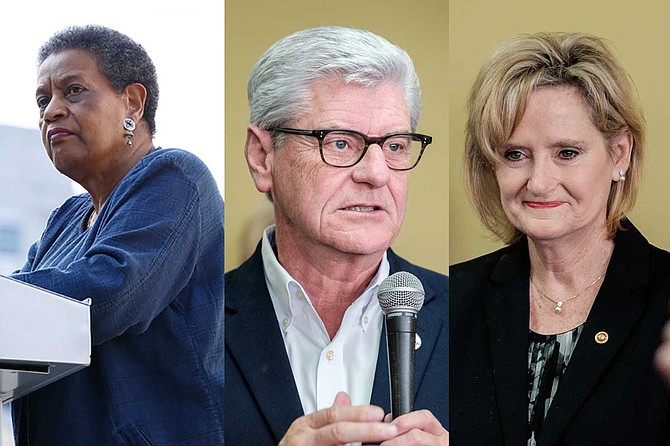 Civil rights activists Myrlie Evers-Williams said on March 15 that she was ‘incensed’ over remarks Mississippi Gov. Phil Bryant made, and criticized U.S. Sen. Cindy Hyde-Smith for comments she made last year. Photos by Imani Khayyam and Ashton Pittman

Since the early 2000s, Democratic Rep. Bennie Thompson has pushed for and repeatedly introduced legislation to bring federal recognition and protections to the slain voting-rights activist's historic Jackson home, where white supremacist Byron de la Beckwith shot and killed him in his driveway in June 1963.

On Tuesday, President Trump signed a law making the home a national monument after Congress finally passed the bill on Feb. 27. In a tweet Wednesday, Bryant praised the president for signing it and credited Mississippi’s two white U.S. senators—Sen. Roger Wicker and Sen. Cindy Hyde-Smith.

Evers-Williams was “incensed,” she said.

“I am tired, I am worn, I am weary, but I still have fight in me—that (fight) that Medgar Evers helped build and instill in me,” Evers-Williams told SiriusXM radio host Joe Madison in an interview Friday. “I am too old, I have lived too long, I have given too much to sit down and be quiet about something I feel is unjust.”

She slammed Bryant’s refusal to acknowledge Thompson “and all of the others who over those 16 years (who) have worked to see that the Medgar Evers home becomes a historic home for all Americans.”

Instead of owning up to his oversight and crediting Thompson, though, Bryant replied with a defiant statement on Thursday—and compared Thompson to the kind of hate that white supremacists directed at civil-rights leaders like Evers.

"It's sad that Congressman Thompson so desires personal acclaim that he shatters what should be a time of celebration for all Mississippians with this designation," Bryant said. "His anger and hatred are the very characteristics that separated our people in the civil-rights era. He has become a tragic figure who has squandered this opportunity to help bring our state together."

‘There Have Been No Apologies, Nothing’

In the radio interview Friday, Evers-Williams was angry. She reserved criticism not just for Bryant, but also for Hyde-Smith.

“How dare that (credit) be taken and given to one or two people who are new, and especially with the female representative who said when she was running for (Senate)—Joe, please excuse me, I’m getting very upset at this point in time,” Evers-Williams said, pausing.

Evers-Williams was clearly referring to a comment Hyde-Smith made in November, when she was still running for election to keep the U.S. Senate seat Bryant appointed her to in spring 2018. While speaking with a supporter in Tupelo, Hyde-Smith said she liked him so much that “if he invited me to a public hanging, I would be on the front row.”

Her Democratic opponent at the time, former U.S. Secretary of Agriculture Mike Espy, is African American, and the comment sparked national controversy. Many interpreted her statement as a reference to Mississippi's history as the state with the most lynchings of African Americans.

“There have been no apologies, nothing,” Evers-Williams said of Hyde-Smith’s comment. “And how dare anyone on my husband’s life and his death take claim for something that they were just the opposite of. I’m incensed, Joe. My daughter told me, ‘Mom, be calm, be cool.’ I will be darned if I can be calm and cool. … I can’t be calm, I can’t be still, I can’t be quiet.”

After years of crafting legislation to enact the home of the late Civil Rights icon, Medgar Evers, and his wife Myrlie Evers, as a national monument, I am proud to say it has been signed into law. (https://t.co/Hmdyq0tmvG) pic.twitter.com/3qYE4DYqO0

In November, Hyde-Smith said the comment was “an expression of regard” and not meant to refer to lynchings. At a debate later that month, she offered a vague, non-specific apology for “anyone I’ve offended,” but then accused Espy of “twisting” her words “for personal gain.” Later, when an NBC reporter asked her to clarify what she was apologizing for, she said it was for “anything that I could have possibly said.”

The 16 years Thompson worked on the legislation is longer than Trump, Wicker and Hyde-Smith have each held their current offices. Trump has been president for a little more than two years, Wicker has been a senator for 12 years, and Hyde-Smith has held her seat for less than a year.

Hyde-Smith first supported the effort last May, shortly after Bryant appointed her to the seat Cochran vacated. [

On Wednesday, Espy, who is considering a 2020 rematch against Hyde-Smith, criticized Bryant for not crediting Thompson.

"Everyone who has followed this issue over the years KNOWS that @BennieGThompson was instrumental," Espy tweeted. "Thanks, Congressman."

Last year, Espy came closer to winning a U.S. Senate seat than any Mississippi Democrat since the 1980s. He ultimately lost to Hyde-Smith, but not until she made a comment about attending "a public hanging" that many interpreted as a reference to Mississippi's past as the state with the most lynchings of African Americans.

"A governor giving credit to Trump and two Senators while omitting the work of a Congressman who endured Jim Crow in Mississippi is intolerable and unacceptable," she wrote.

The governor who appointed Hyde-Smith is known for his staunch support of the Mississippi state flag, which contains within its canton the emblem of the Confederacy. In high school, Bryant attended a segregation academy that the racist Citizens' Council, known colloquially as the "White Citizens Council," started.

He is a member of the Sons of Confederate Veterans, an organization known for its efforts to revise history with false claims that the Civil War was fought over "state's rights," and not slavery. The group recently gave Bryant the John J. Pettus Heritage Award, named for Mississippi's virulently racist, slave-holding governor who led the state in secession.

The Jackson Free Press revealed in February 2016 that Bryant was quietly declaring April "Confederate Heritage Month" annually, but with no mention of slavery, the cause of the war.

At the opening of the Mississippi Civil Rights Museum last year, Bryant created a firestorm when he invited Trump to speak at the event. Also in attendance was Evers-Williams, who was at home with their children when he was assassinated and went on to become a major civil-rights activist in her own right after his death. During the opening, Sen. Wicker even called former Confederate President Jefferson Davis a hero.

In the radio interview Friday, Evers-Williams expressed concern that not enough is being done to carry on the work that civil-rights heroes like her husband began.

“I can’t move around like I used to, but I still have this big mouth that I’ve always had,” continued Evers-Williams, who will be 86 years old on Sunday. “I still have the love for Medgar Evers that I’ve always had—the respect for him and for all the people of all colors who worked so hard to see that justice prevail, and that honesty be told and upheld in this country. If we don’t work to see that happen, if we don’t instill that in the minds of our young people, where will our country be in a few years from now?”