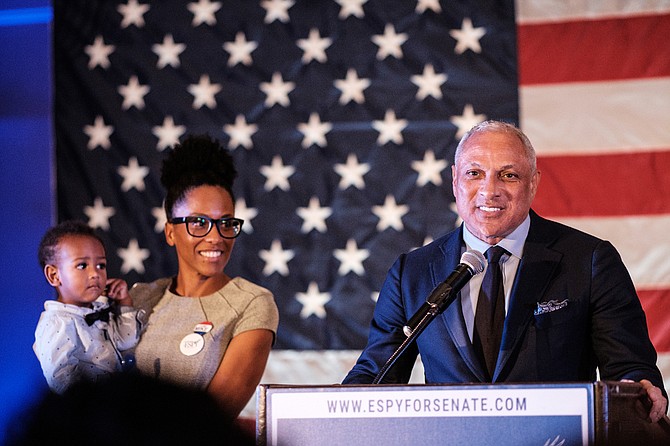 U.S. Sen. Cindy Hyde-Smith accused her Democratic opponent, Mike Espy (pictured here with daughter Jamilla Espy and his grandchild), of “mansplaining” after he said he would be better for women. Photo by Ashton Pittman

JACKSON—Incumbent Republican U.S. Sen. Cindy Hyde-Smith accused her Democratic opponent, Mike Espy, of sexism and “mansplaining” after he told supporters he would be a better U.S. senator for women.

Espy made the comment at a Nov. 17 Jackson fundraiser with U.S. Sen. Kamala Harris.

She became the first Mississippi woman to serve in either chamber of Congress when Gov. Phil Bryant appointed her in April after former Sen. Thad Cochran stepped down four years into his six-year term.

“I can’t wait to see how the Democrats defend this sexist remark,” he tweeted.

“If a @GOP man said this, he’d be condemned left and right. @realDonaldTrump,” Smith wrote in a tweet, tagging President Donald Trump.

Trump Routinely Claims to Be Better for Women

In fact, a Republican man—the same one Smith tagged—did make that precise argument on multiple occasions in 2016, when Donald Trump was running against Hillary Clinton, the first woman nominated for president by a major political party in U.S. history.

“I will be better for women by a big factor than Hillary Clinton—who frankly, I don't even think will be good to women,” he said.

Trump said the same during the Republican primaries, when one of his opponents was businesswoman Carly Fiorina.

“I'm going to do things for women that no other candidate will be able to do," Trump said in fall 2015, after he criticized a female debate moderator’s tough questioning by saying she had “blood coming out of her wherever.”

Trump targeted Fiorina personally during the primaries, at a time when she was edging up in the polls. “Look at that face, would anyone vote for that?” Trump told Rolling Stone at the time.

Despite Trump’s extensive history of sexism and, by her definition, “mansplaining,” Hyde-Smith said in a press release Sunday that she is “very excited” to welcome the president to Mississippi to campaign with her on Nov. 26, with two rallies taking place in Tupelo and Biloxi.

Jackson activist and Mississippi Reproductive Freedom Fund co-founder Laurie Roberts said Hyde-Smith and the GOP do not know what mansplaining is. “It’s odd that the same party that says mansplaining is a fiction now wishes to invoke it,” she said. “Mansplaining is when men condescendingly explain to women that which we already know.”

“Any time a bunch of men get together and try to decide what sexism is, it’s always going to end badly,” she said. “As with the bulk of the Republican Party right now, the Mississippi GOP seems to think that because they have a woman’s voice, that they are pro-women. This is untrue. Conservative women are allowed their opinion. This does not mean their stances are feminist or are pro-woman in nature.”

For instance, many women point out, Hyde-Smith opposes legalized abortion. In an October interview with The Clarion-Ledger, she said she supports equal pay for equal work for women, but rather than advocating for an equal-pay law for Mississippi, said she trusts “the judgment of leaders in Mississippi to determine how best to address wage discrepancies.”

Hyde-Smith ‘Being Used by the Powers-That-Be’?

When Trump’s recent Supreme Court nominee, Brett Kavanaugh, faced accusations of sexual assault from multiple women—including Christine Blasey Ford, who testified before the Senate Judiciary Committee alleging he attempted to rape her when they were teenagers—Hyde-Smith defended Kavanaugh.

On the Senate floor, Hyde-Smith said it was “my duty … as the first woman to represent our great state in Congress to speak in strong support of Judge Brett Kavanaugh.” She accused critics of Kavanaugh of doing a “disservice to victims of sexual violence” and after Kavanaugh was confirmed, called his opposition “evil.”

For his part, Espy called Hyde-Smith’s unquestioning support of Kavanaugh “irresponsible” and “wrong.”

“I think if Cindy thinks a woman lied to endure that much misery, and quote me here, Cindy is a misguided idiot who is being used by the powers-that-be,” Gregory said.

Hyde-Smith, she said, “will say and do whatever” conservative men want.

On Oct. 29, Hyde-Smith tweeted that she was “proud” to have the endorsement of Penny Nance, the president of Concerned Women for America, which opposes the Violence Against Women Act on the basis that it is “a war against men” and has argued against modern reauthorizations for extending protection to LGBT people.

“She’s the one wearing a dress, and they are using her for that only,” she continued. “I’m sure Cindy and other conservative women would be highly offended by that statement. And I can understand that as I have some women like that in my family, and I’ll tell you what I tell them: Stockholm Syndrome is a thing. Internalized misogyny is a thing. And we need progressive Mississippi women that are pro-women and understand what women need to make their families successful.”

It’s about Hyde-Smith’s views on race, too, Roberts said.

“Cindy Hyde-Smith is tone-deaf on race and gender issues, so there is no mansplaining occurring—just correcting ignorance,” Roberts said. “Cindy Hyde-Smith can’t be pro-women when there’s only one race of women in our state she’s concerned about, and she keeps revealing that over and over again. Pointing that out isn’t mansplaining; it’s just educating.”

If elected, Espy would be Mississippi’s first black U.S. senator since Reconstruction; he became the state’s first black congressman since that same era in 1987.

Earlier this month, Hyde-Smith criticized Espy in a press release for a vote he took as a congressman in 1992 for the Freedom of Choice Act, which would have protected the right of women to have abortions before fetal viability.

Hyde-Smith and Espy headed to a runoff after snagging the top two spots in the general election on Nov. 6, with neither getting an outright majority. Hyde-Smith beat back a challenge from a fellow Republican, Mississippi State Sen. Chris McDaniel, whom her campaign argued could lose to Espy because of his "toxic" history of remarks about race and women.

"If Chris McDaniel made the runoff against Democrat Mike Espy, his toxic image would put the seat at risk in much the same way Roy Moore lost the Alabama Senate race to Democrat Doug Jones," Scallan said in September, referring to the Republican U.S. Senate candidate who lost after facing accusations that he had preyed on teenage girls.

At that time, Hyde-Smith accused McDaniel of sexism for a comment he made on a radio show in which he said “99 percent” of sexual-assault claims are made up; that was before she made her speech in defense of Kavanaugh.

One video published by the Bayou Brief on Nov. 11 revealed comments Hyde-Smith made a Tupelo campaign stop on Nov. 2, in which she told a cattle rancher that, if he invited her to a “public hanging,” she “would be on the front row.”

On Nov. 15, Bayou Brief published a second video. In that clip, Hyde-Smith seems to call voter suppression a “good idea.”

Hyde-Smith communications director Melissa Scallan said told the Jackson Free Press on Nov. 15 that the comment was a joke and that Hyde-Smith was referring to the idea of putting polling places on college campuses a “great idea”—not “(making) it just a little more difficult” to vote.

Republicans hope Trump’s visit will stymie the bleeding, but the videos’ publication has GOP officials worried that they could lose another senate seat in a solid red Deep South state.

Days after the ‘hanging’ video surfaced, Peter Zieve, a notorious white supremacist whose business faced a lawsuit for discriminating against Muslim applicants and who gave “procreation bonuses” to his 95 percent white staff, donated $2,700 to the Hyde-Smith campaign. The Jackson Free Press asked the campaign about the donation on Nov. 15, but as of Monday, they still had not commented.

On Nov. 20, Mississippi Farm Bureau will host Espy and Hyde-Smith for a U.S. Senate debate that will be broadcast on WLBT, WLOX and radio stations statewide at 7 p.m. It will be the first U.S. Senate debate in Mississippi in 10 years. The debate will last one hour and will be closed to the public and all media, except the moderator and panelists.