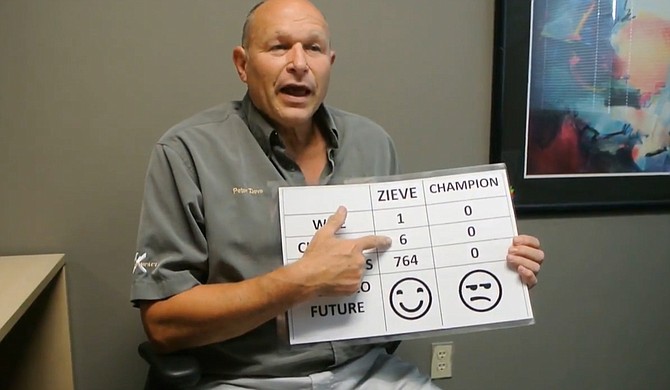 Businessman Peter Sieve, who is notorious for his white supremacist views, donated $2,700 to U.S. Sen. Cindy Hyde-Smith after a video surfaced in which she made comments about being “on the front row” of “a public hanging.” Screenshot from YouTube

JACKSON—U.S. Sen. Cindy Hyde-Smith accepted a donation from Peter Sieve, a businessman in Washington state known for his white supremacist views, just days after a video published by Bayou Brief surfaced in which she says she would be “on the front row” if a supporter invited her to “a public hanging.”

The State of Washington sued Zieve in 2011 for refusing to hire Muslims at his business, Electroimpact. He required applicants to submit photos of themselves, documents show.

"I can tell you that most Chinese hate moslems,” the lawsuit quotes him saying in an April 2015 email. “Not as much as me, but an adequate amount of hate."

In an October 2015 email, Zieve responded to an employee’s announcement that his wife had given birth to a baby by writing that “381,000 terrorist savages have gotten into Europe so far this year and if we don’t make more babies the light will (go) out on civilization.”

“When (our sons and daughters) choose to not repopulate and allow our wonderful country to be backfilled with rubbish from the desperate and criminal populations of the third world, I find that to be disgusting and I find those persons to make these decisions to be repulsive and I don’t like them around me,” Zieve wrote in an email that February.

In another email, sent in December, Zieve seems to reference a popular neo-Nazi slogan.

“The future can only be secured by building families,” he wrote. That sounds like a reference to the Fourteen Words, a neo-Nazi slogan inspired by Adolf Hitler’s writing and used by white supremacists worldwide.

“We must secure the existence of our people and a future for white children,” the Fourteen Words read.

The Fourteen Words appear in the White Genocide Manifesto written by David Lane, a founder of the white supremacist terrorist organization known as The Order. He also wrote the 88 Precepts essay, which advocates for racial religions, rejects universal religions like Christianity, opposes integration and argues for segregation. White supremacists often use 14/88 to refer to the two documents.

In 2018, the Trump administration’s U.S. Department of Homeland Security came under fire for a document with a 14-word title similar to the one neo-Nazis use that included references to the number 88.

“We Must Secure the Border and Build the Wall to Make America Safe Again,” reads the title of the document. The Trump administration denied any intent to invoke the Fourteen Words.

Zieve donated over $1 million to Donald Trump in 2016.

The Jackson Free Press contacted Zieve Friday to ask why he donated to Hyde-Smith.

“I believe she’s a Republican,” he said.

When asked if Hyde-Smith’s “public hanging” played any role in his donation, Zieve denied knowledge of the comment and quickly hung up the phone.

“I don’t know anything about that. Sorry, I can’t help you. Bye,” Zieve told the Jackson Free Press.

On Thursday night, the Jackson Free Press asked Hyde-Smith’s communications director, Melissa Scallan, about the donation and whether the campaign would return it, but she declined to comment until she spoke to the campaign’s finance department. As of 4 p.m. Friday, though, she had not responded.

On Thursday, Bayou Brief published a second video. In that clip, Hyde-Smith seems to call voter suppression a “good idea.”

Scallan said told the Jackson Free Press Thursday that the comment was a joke and that Hyde-Smith was referring to the idea of putting polling places on college campuses a “great idea”—not “(making) it just a little more difficult” to vote.

“How do you save half the Muslims? Kill the other half,” one employee wrote in a company “jokes” listserv. In December 2015, Zieve sent an email to the listserv saying “American born Muslims are almost as dangerous as the Syrian imports.”

Afterward, he made a run for Mukilteo City Council in Washington, and part of his platform included a plank to “strengthen public safety in response to transient and criminal populations moving into Mukilteo.” He attacked his opponent for neither being married nor having kids. He lost after winning 33 percent of the vote.

In 2016, Zieve admitted he was behind a campaign to stop construction of a mosque in Mukilteo.

Scallan would not comment on the donation Thursday evening.

He is one of the top donors to Solution Fund, a Louisiana-based Super PAC that in 2017 supported Republican Roy Moore’s failed bid for U.S. Senate in Alabama. That year, the PAC used Trump’s attacks on black NFL players to boost fundraising and help Moore’s campaign.

"If Chris McDaniel made the runoff against Democrat Mike Espy, his toxic image would put the seat at risk in much the same way Roy Moore lost the Alabama Senate race to Democrat Doug Jones," Scallan said in September.