FEC Filings: Hyde-Smith Returned Racist's Donation, But Not $50,000 to Corporations 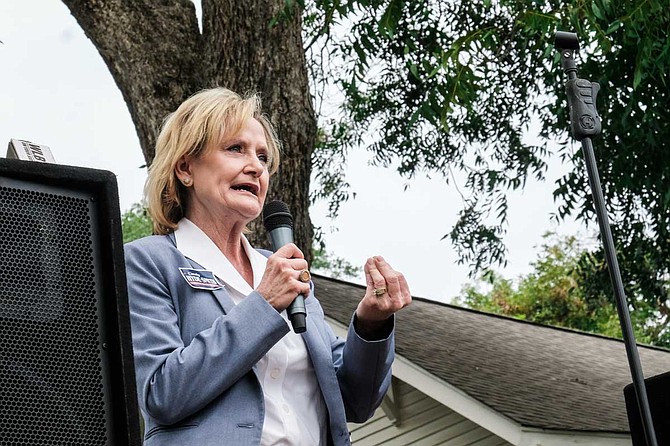 Companies that had donated to the Mississippi Republican's campaign through corporate PACs began making the requests after a video surfaced during the U.S. Senate runoff of the junior senator from Mississippi saying she would "be on the front row" if a constituent invited her to "a public hanging."

Among the companies that requested, but did not receive, refunds are Walmart, Google, AT&T, Union Pacific, Pfizer, Aetna, Walgreens and others. Candidates are not required by law to honor refund requests.

Earlier this month, The New York Times erroneously reported that the campaign had refunded Major League Baseball the $5,000 it had given her. In fact, the filings show that MLB simply cancelled the transaction before it could process. One other company, the drugmaker Amgen, was able to cancel a $5,000 donation as well, but still had not received a refund for $4,000 it donated earlier in the year.

After the "hanging" video went public, journalist Judd Legum, whose newsletter Popular Info specializes in investigating money and advertising in politics and media, reported extensively on Hyde-Smith's donors and led a public pressure campaign on Twitter to urge companies to request refunds.

After the new FEC filings published Thursday, Legum again reported their contents, noting that Hyde-Smith did refund a $2,700 donation to Charles B. Johnson, the majority owner of the San Francisco Giants, and $2,700 to his wife, Ann L. Johnson.

Hyde-Smith's refusal to issue around $50,000 in refunds to others who have requested them may have something to do with the fact that her campaign has just under $64,000 cash on hand, the filings show.

They also show that Hyde-Smith did return a donation to white supremacist Peter Sieve, who donated $2,700 to her campaign after the "public hanging" video surfaced.

Despite pressure, Amazon was conspicuously absent from the group of Hyde-Smith donors who requested refunds; the retail giant never asked that its $5,000 donation be returned.

On Friday, Mississippi Gov. Phil Bryant announced alongside Amazon in a company press release that the online retailer plans to open a 554,000-square-foot distribution facility in Marshall County in north Mississippi.

Bryant appointed Hyde-Smith to the U.S. Senate earlier this year after former Sen. Thad Cochran stepped down due to poor health. When she ran in November's special election to serve out the remaining two years of Cochran's term, Bryant campaigned for her heavily; Wicker, Harper and President Trump also joined her at campaign rallies.

She defeated Democrat Mike Espy in November's runoff and became the first woman from Mississippi elected to Congress in history. Espy has already filed for a rematch with Hyde-Smith when her seat is up again in 2020. In 1986, he became the first African American from Mississippi elected to Congress since Reconstruction and served as U.S. Sec. of Agriculture from 1993 to 1994.

Hyde-Smith's latest FEC filings appeared on FEC.gov Thursday even though the agency is closed during the government shutdown and most of its employees are not reporting to work. Though the U.S. Senate unanimously passed a budget, the government shut down after Trump told the currently Republican Congress he would veto any budget they passed that did not include $5.7 billion to build a wall along the U.S.-Mexico border.

"If we don't get what we want, one way or the other ... I will shut down the government," Trump said in an appearance with Democrats on Dec. 11.

The GOP-dominated House passed a budget that included the wall funding, but it was dead on arrival in the Senate, and the government shut down for the third time this year on Dec. 22. The shutdown is set to continue into 2019, when the new Congress is sworn in, and Democrats take control of the House.

Trump and members of Congress still get paid during the shutdown, but about 420,000 federal workers will work without pay until it is resolved. Another 380,000 have been furloughed.

Ashton Pittman is the state reporter for the Jackson Free Press. Follow him on Twitter @ashtonpittman. Email him story tips at [email protected].