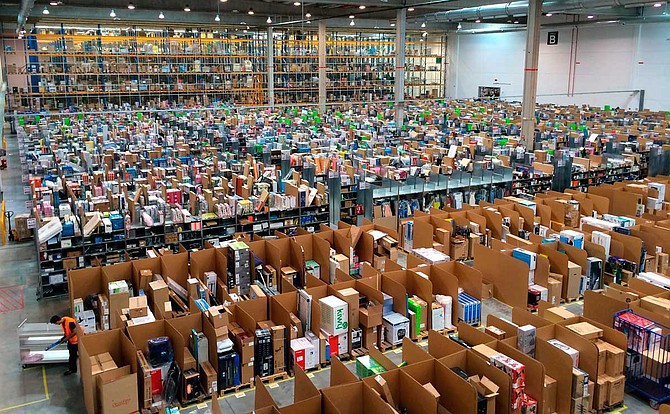 Amazon announced it will open a distribution warehouse in Marshall County, Miss., that will bring 850 full-time jobs to the state. Photo courtesy Álvaro Ibáñez Photo by Álvaro Ibáñez

JACKSON — Amazon plans to open a distribution warehouse in Marshall County, Miss., that the online retail giant said in its announcement Friday will create 850 full-time jobs in the northernmost part of the state over a three-year period.

Pay for employees who will "pick, pack and ship" consumer goods will start at $15 an hour, in line with Amazon's decision in October to raise its minimum wage for all employees nationwide to that level in response to widespread criticism.

"I am proud to welcome Amazon as the newest member of the Mississippi business community," Gov. Phil Bryant said in an Amazon press statement. "Amazon's presence demonstrates to industry leaders around the globe that Mississippi has what it takes for companies like Amazon to remain competitive and efficiently reach their consumers from our attractive location in the Southeast U.S."

Day one benefits for full-time employees at the Mississippi facility will include comprehensive healthcare, a 401k, 20 weeks of paid parental leave and assistance for employees pursuing degrees in "high-demand fields."

Amazon did not specify a date for the facility's opening and did not respond to a request for comment at press time.

Glenn McCullough Jr., the executive director of the Mississippi Development Authority—which is assisting with the project—credited Bryant for bringing Amazon to the state, tweeted that it is a "strategic win for Mississippi."

"We are excited to bring our first fulfillment center to Mississippi, creating 850 full-time jobs with a $15 minimum hourly wage," John Felton, Amazon's vice president of global customer fulfillment, said in a press statement. "We appreciate the state and local elected leaders who have supported Amazon's entrance into Mississippi, and we look forward to providing great job opportunities and an exceptional customer experience."

The Tennessee Valley Authority will also assist with the project.

During the 2018 election cycle, Amazon's PAC donated $5,000 to U.S. Sen. Cindy Hyde-Smith, whom Bryant appointed to the seat in April after former Sen. Thad Cochran and staunchly supported in November's special election.

Activists pressured Amazon to seek a refund of its donation in November after a video emerged in which Hyde-Smith said she would be on the "front row" if a constituent invited her to a "public hanging."

Amazon did not request a refund, though, even as other organizations did, including Facebook, Google, Walmart, AT&T, BlueCross BlueShield, Pfizer, Major League Baseball, and more.

Last week, The New York Times reported that the Hyde-Smith campaign had only returned one donation—$5,000 to the MLB—and that her campaign told Walmart that it had no plans to return its $2,000 donation.

Amazon's PAC also donated to other Bryant-supported Republicans, giving $7,500 to U.S. Sen. Roger Wicker and $1,000 to Rep. Gregg Harper, who is retiring.

A month before Amazon announced the race, U.S. Sen. Bernie Sanders, I-Vt., and U.S. Rep. Ro Khanna, D-Calif., introduced the BEZOS Act in Congress, which would tax corporations for each dollar the government spent subsidizing employees for healthcare and nutrition assistance.