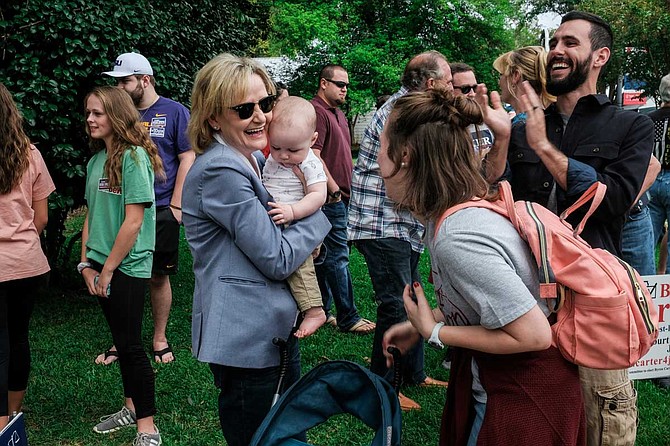 JACKSON — Just months after winning the most closely contested U.S. Senate race in Mississippi since the 1980s, U.S. Sen. Cindy Hyde-Smith plans to kick off her 2020 re-election bid next month with a high-dollar fundraiser in Washington, D.C.

In an invitation sent out to select supporters for a fundraiser with the National Republican Senatorial Committee PAC, Hyde-Smith requests a minimum $1,000 contribution per attendee. To become a sponsor, attendees can make a $2,500 PAC contribution. A $5,000 PAC donation, meanwhile, gets contributors dubbed a "co-host" and a "Senator's Circle Membership."

Last August, the Jackson Free Press reported that Wicker, too, held a fundraiser with requested contributions for couples ranging from $1,000 to $5,000. Joining him there was Karl Rove, who served as a political strategist and senior adviser to President George W. Bush in the early 2000s.

"Contributions up to $233,800 accepted," a leaked invitation posted at politicalpartytime.org reads.

Former Mississippi GOP Gov. Haley Barbour founded the BGR Group, which stands for Barbour, Griffith and Rogers. He left the firm to serve his two terms as governor, but returned to help run it in 2012.

The BGR Group has ties to Russian government figures and companies, some of them swept up in Special Counsel Robert Mueller's investigation into Russian efforts to sway the 2016 election toward then-candidate Donald Trump. From 2004 to 2015, BGR Group represented Alfa Bank, owned by Russian oligarchs. The FBI has investigated Alfa Bank because of odd communications data experts detected between it and the Trump organization during the 2016 election.

The data expert who found the communications between the bank and Trump Tower claimed it looked like "a covert communication channel."

"We were watching this happen in real time—it was like watching an airplane fly by," the data guru, identified only as "Max," told The New Yorker last year. "And we thought, Why the hell is a Russian bank communicating with a server that belongs to the Trump Organization, and at such a rate?"

The BGR Group also lobbied Congress on behalf of Uranium One, a company based in Canada the Russian government owns. In 2017, U.S. Senate Judiciary Committee Chairman Chuck Grassley wrote a letter to then-U.S. Attorney General Jeff Sessions warning that BGR's its lobbying for the Russian company violated the Foreign Agents Registration Act.

"None of the firms have registered under FARA for their representation," Grassley wrote in the letter, which the Hattiesburg Patriot uncovered last year. "However, at the time of representation, Uranium One was owned by the Russian government-owned company, Rosatom."

In 2010, the Obama administration approved a deal giving Moscow control of 20 percent of American uranium. At that time, The Hill reported in 2017, "the FBI had gathered substantial evidence that Russian nuclear industry officials were engaged in bribery, kickbacks, extortion and money laundering designed to grow (Russian President) Vladimir Putin's atomic energy business inside the United States, according to government documents and interviews."

In 2017, Barbour and BGR Group agreed to do lobbying work on behalf of Ukraine, which was once part of the Soviet Union. Putin has sought to bring Ukraine back under Russian control, starting with a military invasion in 2014 that continues to this day.

After Gov. Phil Bryant appointed Hyde-Smith after former Sen. Thad Cochran retired last spring, she raised nearly $5.2 million to win the November special election to finish out Cochran's final two years. She spent all but $53,914 of it, campaign-finance reports show.

Her Democratic opponent, former U.S. Secretary of Agriculture Mike Espy, raised nearly $6.98 million, and came closer to winning that seat than any Mississippi Democrat since 1982.

Just days after losing the special election, Espy filed to run for the seat again in a possible 2020 rematch.

"He's very interested in doing it," former Espy Communications Director Danny Blanton told the Jackson Free Press last November. "As Mike said in his concession, this isn't the end—it's the beginning. We did things we'll be able to build on."

December filings from the Hyde-Smith campaign show she declined to return more than $50,000 to corporate donors who had requested refunds from her campaign in November.

Companies that had donated to the Mississippi Republican's campaign through corporate PACs began making the requests after a video surfaced during the U.S. Senate runoff of the junior senator from Mississippi saying she would "be on the front row" if a constituent invited her to "a public hanging."

Mississippi's history as the state with the most lynchings of African Americans in the years after the Civil War, coupled with the fact that Espy would have been the first black senator from the state since Reconstruction if he had won, made the comment politically toxic.

Among the companies that requested, but did not receive, refunds were Walmart, Google, AT&T, Union Pacific, Pfizer, Aetna, Walgreens and others. Candidates are not legally required to honor refund requests.

The filings showed that Hyde-Smith did return a donation to white supremacist Peter Sieve, who donated $2,700 to her campaign after the "public hanging" video surfaced.

During the 2018 campaign, Hyde-Smith boasted that she had a perfect 100-percent pro-Trump voting record, based on FiveThirtyEight's "Trump Tracker." It tallies votes on legislation the Trump White House has taken a position on and rates senators based on how often they vote with him.

Last month, Hyde-Smith voted in favor of a resolution calling for disapproval of the president's plan to withdraw U.S. troops from Iraq and Syria.

That vote pulled her overall Trump score down to 95.8 percent. In the current Congress, which began in January, her Trump score is 87.5 percent. Overall, she is now only the fifth-most pro-Trump member of Congress in FiveThirtyEight's tracker, down from the No. 1 position.

Wicker ties for No. 6 with Texas Sen. John Cornyn, with a 95.7 percent pro-Trump rating.

Mississippi's 2020 U.S. Senate primaries will be held next summer, followed by the election in November, when Trump will also be on the ballot.