Hyde-Smith Demanded No Audience, No Press for Tonight’s Debate 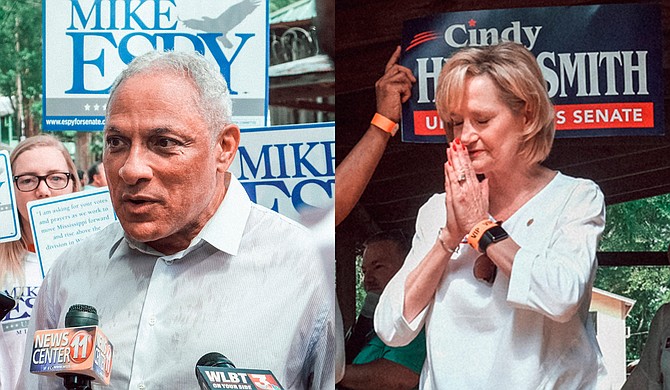 U.S. Senator Cindy Hyde-Smith and candidate Mike Espy will engage in a debate on Nov. 20, 2018, marking the first time Mississippi U.S. Senate candidates have done this in 10 years. Photos by Ashton Pittman

JACKSON—U.S. Sen. Cindy Hyde-Smith demanded there be no audience or outside press allowed at tonight’s U.S. Senate debate and requested other restrictions, two sources familiar with the debate negotiations told the Jackson Free Press Tuesday morning.

When she faces off against Democratic challenger Mike Espy at 7 p.m., only the debate moderator, panelists and the production team will be allowed in the auditorium—a requirement the Hyde-Smith campaign pushed for and the Espy team argued against.

“We supported having an audience, and we advocated for the media to have access to the studio,” Espy Communications Director Danny Blanton told the Jackson Free Press, although he declined to confirm that it was the Hyde-Smith campaign that opposed a public debate.

The Mississippi Farm Bureau Federation, which organized the debate, told the campaigns that the decision to have an audience was up to the candidates, said the source, who asked not to be identified.

The Hyde-Smith campaign did not respond to a request for comment Tuesday morning.

'If She Bombs, It Will Be a Miracle'

Hyde-Smith requested and was granted other accommodations, the source said. A notepad was going to be at the podium for candidates when they stepped onto the stage at the start of the debate, but the Hyde-Smith team wanted the notepad sooner. The candidates will instead be given notepads about an hour before the debate begins. Hyde-Smith's team originally asked that she be allowed to bring in "a binder" but was denied, the source said.

“They have restricted this debate so much that if she bombs, it will be a miracle,” the source said.

At one point in tonight’s debate, the candidates were going to be given the chance to directly ask one another a question. The Hyde-Smith campaign, however, did not like that idea. Instead, they asked to submit the question ahead of time and for the moderator to ask the questions on the candidates’ behalfs.

Blanton would only confirm that the Espy campaign disagreed with the change.

“We thought it made more sense for the candidates to ask the questions directly, and we stated that with the debate organizers,” Blanton said. “And they took it to the other camp.”

The Espy campaign sought other options for a debate venue and proposed a series of three debates instead. When it became clear that the Farm Bureau debate was the only one Hyde-Smith would agree to, the Espy campaign acquiesced.

Hyde-Smith announced that she had agreed to a debate with Espy on Nov. 8—two days after the Nov. 6 election that sent her and Espy to a runoff. At the time Hyde-Smith agreed, the Espy campaign had yet to agree, with Blanton telling the Jackson Free Press they had not even seen the terms of the debate.

On Tuesday, Blanton denied any concerns about Farm Bureau’s partiality. They are not worried, he said, that Hyde-Smith could receive any special treatment, such as getting debate questions in advance.

“We have no concerns about whether she could get questions beforehand because I know all the panelists and the moderator,” Blanton said. “We’re being very diligent to make sure this is a fair debate and no favoritism on either side. So we’re going into this debate with the intention of discussing the issues that are important to Mississippians and letting Mississippians decide who is best to represent them and to bring solutions to the table.”

'They Have Rigged This For Her to Win'

A second source who also asked not to be identified, though, said the debate was "rigged."

"They have rigged this debate for her to win," the second source said. "Espy's campaign wanted full access for the press and a live studio audience—they said no. Espy wanted no notes going in. Instead, she and her team will have time to build a crib sheet with everything she needs to say before hand. Espy wanted the candidates to ask the questions to each other directly—they said it had to be pre-submitted. Presumably that's because she isn't comfortable asking whatever gotcha question her handlers have hooked up."

Prior to the Nov. 6 general election, Hyde-Smith repeatedly declined to join Espy and Republican challenger Chris McDaniel, who was still in the race at the time, for a debate, citing scheduling conflicts and concerns that McDaniel’s supporters would be rude if a debate were held that allowed a public audience. In a secretly filmed video, though, Hyde-Smith said she was refusing on the advice of advisers who said agreeing to such a debate would be like handing McDaniel a $200,000 donation.

On the campaign trail, Hyde-Smith’s team has often sought to minimize her media exposure. Her campaign declined to have her join the Jackson Free Press for a sit-down interview to discuss the issues as Espy and her vanquished opponent McDaniel did. On multiple occasions, the Jackson Free Press has sought to ask her questions at campaign stops, but she would only answer after conferring with and making sure her communications director, Melissa Scallan, was nearby.

"I just do what she tells me to do," Hyde-Smith later said with a laugh as she took the question with Scallan standing beside her.

The rules for tonight's debate, the second source said, are part of the campaign's strategy of minimizing risks for Hyde-Smith.

"This is all part of a larger strategy to keep her completely isolated from the press and make sure that anything she says is in a controlled environment where she faces minimal scrutiny," the second source said.

The Espy team, the first source said, felt backed into a corner; either they could accept Hyde-Smith's demands or there would be no debate at all.

The debate moderator is Maggie Wade of WLBT, and the panelists are WLBT’s Courtney Ann Jackson, Caleb Bedillion of the Northeast Mississippi Daily Journal and Geoff Pender of The Clarion-Ledger.

Beginning at 7 p.m., watch the debate on WLBT or WLOX; radio stations statewide will also air the event. It will be the first Mississippi U.S. Senate debate since 2008.

Historic Race No Matter What

The debate happens exactly one week ahead of the Nov. 27 runoffs, which will result in a historic outcome no matter who wins.

When Gov. Phil Bryant appointed Hyde-Smith, she became the first woman to represent Mississippi in Congress, and she could be the first duly elected depending on the runoff results.

If Espy wins, he would be the first black U.S. senator from the state since Reconstruction, when Sens. Hiram Revels and Blanche K. Bruce represented the state in Washington, D.C., until the end of Reconstruction brought the disenfranchisement of black voters.

The race has taken a series of turns since voters whittled McDaniel out of the running. In recent weeks, Lamar White, who runs the Bayou Brief, a progressive, nonprofit paper in Louisiana, published two videos of Hyde-Smith that have changed the discussion around the election. In one video, she talked about being on the front row of a public hanging if a constituent invited her, and in the other, she talked about a “good idea”—suppressing the vote of “liberal folks” at some Mississippi colleges.

President Donald Trump, who already paid a visit to Mississippi to stump for Hyde-Smith, will return on Nov. 26, the day before the runoff to host rallies in Tupelo and Biloxi on the same day.

In the wake of Hyde-Smith’s “public hanging” video surfacing, Espy flocked to the national media circuit to condemn his opponent’s word choice. Since then, high-profile Democrats have come to stump for him, including Cory Booker and Kamala Harris. Former Vice President Joe Biden also released a Twitter video endorsing Espy on Nov. 19.

Thank you, Vice President @JoeBiden, for saying so plainly what is at stake on November 27. pic.twitter.com/V2H04u2yuJ