Video Captures Hyde-Smith Equating Debate to a $200,000 Donation to McDaniel 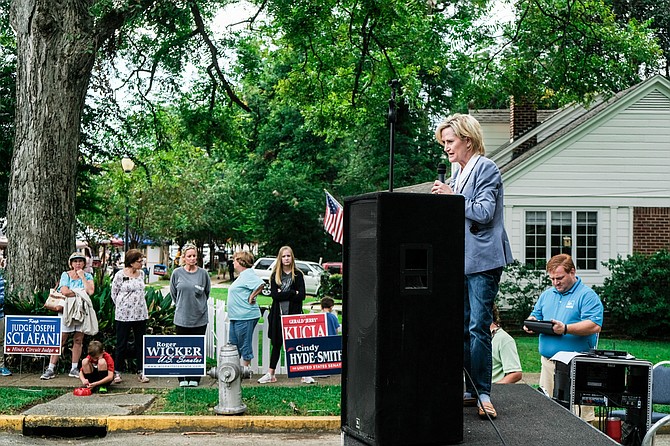 In a secretly recorded video, U.S. Sen. Cindy Hyde-Smith (pictured) said she feared joining her opponents in a debate would give one of them, Republican Chris McDaniel, free publicity. Photo by Ashton Pittman.

JACKSON — In a secretly videoed conversation, U.S. Sen. Cindy Hyde-Smith, R-Miss., said her reluctance to join her opponents for a debate is due to her fear that it would give one of them—Republican Chris McDaniel—free publicity.

In the video, which the Daily Journal first published Monday evening, a woman at a meet-and-greet on Saturday implored Hyde-Smith to join her Republican opponent for a debate.

"You're smart, you're clever; why won't you debate him?" an unidentified woman asked.

"I love debates," Hyde-Smith replied. "But right now, my opponent does not have enough money to get on TV, and my guys are saying that's like handing him a $200,000 campaign donation because he's way down in the polls, and he's wanting the TV shot."

In the past, Hyde-Smith and her campaign said she could not appear at two since-cancelled debates that were set for October because they conflicted with her Senate schedule. After the Senate went on an unexpected fall recess last week, Hyde-Smith's campaign told the Jackson Free Press she was concerned McDaniel and his supporters would not be "civil" at a debate.

Hyde-Smith communications director Melissa Scallan told the Jackson Free Press Wednesday that the candidate knew she was being filmed. In the video, only Hyde-Smith's hands are shown, and none of the women's faces are visible, which suggests the person filming the encounter tried to be inconspicuous.

Sen. Cindy Hyde-Smith says in a recent video obtained by the Daily Journal that she won't debate special election opponent Chris McDaniel because she doesn't want to increase his prominence on the campaign trail.

"Cindy Hyde-Smith has been lying to the Mississippi voters, telling them that she can't debate because of her schedule, when in reality she's not doing it because she lacks the ability to answer difficult questions about her years as a D.C. lobbyist and her Democrat past," McDaniel said.

Hyde-Smith stands by the comments in the video, her campaign's communications director, Melissa Scallan, said.

"There are people who have said she's afraid to debate, but this woman's not afraid of anything," Scallan said. "And I think she's certainly not afraid to talk about the issues. But her point, what she said about the $200,000, that's just a general figure. It costs a lot of money to produce a TV commercial, and he has not raised a lot of money. So if we debated him, that's one of the considerations—we'd just be giving him that commercial."

While Scallan admitted that an elected official could use that excuse—that a U.S. senator would only give an opponent free publicity by debating him or her—to avoid ever taking part in a debate, she said that would not be the case for Hyde-Smith.

"I am comfortable saying she will debate opponents in the future," she said.

Scallan denied McDaniel's charge that Hyde-Smith lied. The fact that a debate would generate publicity for McDaniel was just one of several considerations, she said. The two previously offered were valid and not merely talking points, she said.

'I Told Judge Kavanaugh, 'I Feel Just Like You''

Speaking to the Jackson Free Press in August while hugging her daughter, Hyde-Smith said she would swear on her daughter's life she never voted for Hillary Clinton. In August, the National Rifle Association endorsed Hyde-Smith's election bid, calling her an "ardent supporter of the Second Amendment." Neither of those facts has dissuaded McDaniel from his claims, however, and that's a point of frustration for her.

"He knows that I cannot stand Hillary Clinton, and he's trying to get to me," she says in the video.

In it, one of the unidentified women calls McDaniel "eye candy."

"Enjoy your eye candy, but I can't go for somebody that lies," Hyde-Smith replies. "The truth is not in him."

"I told Judge Kavanaugh, 'I feel just like you,'" Hyde-Smith said in the video, referring to the newly confirmed Supreme Court justice whose nomination process was marked by allegations of sexual assault from multiple women. "I have an opponent who is out there spreading lies like crazy about me."

One of Kavanaugh's accusers, Christine Blasey Ford, testified before the U.S. Senate Judiciary Committee in September. During sworn testimony, Ford alleged that Kavanaugh attempted to rape her at a party when she was 15 and he was 17. Despite the testimony, Kavanaugh was confirmed by the slimmest margin for a Supreme Court justice in over 100 years, and Hyde-Smith was among the Republicans who voted to confirm him.

'He's Got People That Can't Think for Themselves'

"Please don't believe his lies," Hyde-Smith implores the women in the video. "If his lips are moving, he's lying. He's got people that can't think for themselves and they believe it."

McDaniel fired back in his press release.

"This is exactly how the establishment treated President Trump," McDaniel said. "They called his supporters deplorable. They called him a liar. This is Swamp Politics 101. ... And the fact that she has the audacity to call conservatives horrific and uncivil tells you how she really feels about Mississippi voters."

McDaniel was incorrect in attributing those words to Hyde-Smith, though. In an article in the Jackson Free Press on Monday, Scallan described McDaniel's supporters' behavior—not his supporters themselves—as "horrific," in reference to an incident at the Neshoba County Fair in August in which a group of them booed and shouted over Hyde-Smith as she delivered a speech.

Trump endorsed Hyde-Smith in August and held a campaign rally with her in Southaven, Miss., in early October.

In the video, Hyde-Smith complains that McDaniel "sends people" to her events and "tries to get me on camera." She references a "lady" who she says "has been videoing all night."

"There's people here tonight trying to set me up for questions and pictures and everything else, but that is just how he operates," she says.

Scallan said the campaign did not know the identify of the person who made the recording nor of the women who questioned Hyde-Smith. Tanner Watson, McDaniel's press secretary, said they didn't know, either.

Espy Calls on Hyde-Smith to Debate

After the video's publication, Hyde-Smith and McDaniel's Democratic opponent, Mike Espy, released an open letter Tuesday. "The time for a debate has come," he wrote.

"Public discourse is important, now more than ever, and Mississippi deserves to hear our views and understand where we differ, whether it's on health care, education, or job opportunities," Espy wrote. "The stakes are just too high."

Espy invited Hyde-Smith to join him for a debate on either Nov. 1, 2 or 3, and asked for her "prompt" response by Oct. 19. "As you've said you are already willing to do this, it should be an easy conversation for us to pick a date," Espy wrote.

Scallan noted that Espy pulled out of an Oct. 4 debate he had already agreed to take part in with McDaniel. Espy cited Hyde-Smith's decision not to take part in the debate as his reason for pulling out.

"Mike Espy was the one who decided if she wasn't going to do it, neither was he," Scallan said. "He committed, and he pulled out. So for people to say it was because of her is not accurate."

Voters choose between Espy, Hyde-Smith and McDaniel in a nonpartisan special election on Nov. 6—the same day as the national midterms. If no one gets more than 50 percent of the vote, the top two vote-getters will face one another in a Nov. 27 runoff. Incumbent Republican U.S. Sen. Roger Wicker and Democratic rival David Baria also face off that day, and U.S. House seats are up in all four of Mississippi's congressional districts.