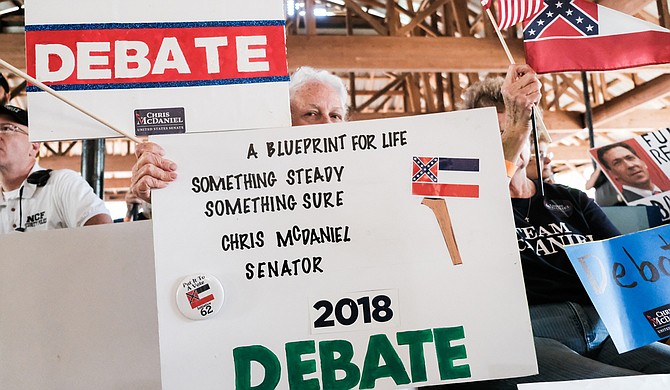 As incumbent Republican U.S. Sen. Cindy Hyde-Smith speaks at the Neshoba County Fair in Philadelphia Miss., on Aug. 2, 2018, supporters of her Republican challenger, Mississippi State Sen. Chris McDaniel, hold up signs calling on her to join him for a debate. Photo by Ashton Pittman.

JACKSON — Exactly 10 years and one day after the last time Mississippi voters had a chance to watch their top-tier U.S. Senate candidates debate, Millsaps College and Mississippi Public Broadcasting will host three of the candidates in this year's U.S. Senate special election on Oct. 4.

The incumbent in the race, Republican U.S. Sen. Cindy Hyde-Smith, will not attend. Gov. Phil Bryant appointed her to the seat in April after former Sen. Thad Cochran retired for health reasons.

Democratic challenger Mike Espy and Republican challenger State Sen. Chris McDaniel accepted invites to the debate, as did Tobey Bartee, a lesser-known Democratic candidate from Gautier. Espy served as U.S. secretary of agriculture from 1993 to 1994 under President Bill Clinton.

The trio of challengers also accepted invitations to an Oct. 23 debate that The Clarion-Ledger, WLBT and the Mississippi Bar Association are co-sponsoring.

Hyde-Smith's campaign communications director, Melissa Scallan, confirmed to the Jackson Free Press on Friday, Sept. 14, that the candidate will not attend the debates.

"She has got to be in D.C. from Monday through Thursday, so she can't debate during that time," Scallan said, noting that Oct. 4 is on a Thursday while Oct. 23 is on a Tuesday. "She has said she would not skip a vote in order to campaign. So those two dates would not work for us."

Would Hyde-Smith accept the invitation if the debate was on a Friday or Saturday instead?

"We would definitely look at it," Scallan said. "We might be able to do it, but she is pretty booked up. It's hard to speculate."

McDaniel would accept a weekend debate, too, if someone scheduled one, press secretary Tanner Watson told the Jackson Free Press.

A debate including Espy, Hyde-Smith and McDaniel could offer voters a chance to see contrasts in policy matters such as trade. Espy and McDaniel have already expressed differing views on trade, but Hyde-Smith has stayed mostly silent on the issue.

Earlier this month, McDaniel criticized Hyde-Smith's reticence to appear for a debate, which he had been seeking for months.

"I can't imagine why someone running to represent our state in the U.S. Senate—which used to be known as 'the world's greatest deliberative body'—would avoid discussing the issues facing Mississippi, but sadly we've seen it before," McDaniel said in a Sept. 5 press release.

In 2014, then-Sen. Thad Cochran declined to debate McDaniel in a raucous Republican primary, where McDaniel narrowly failed to oust the decades-long incumbent.

Top-tier U.S. Senate candidates from Mississippi last hashed out their views on policy in Mississippi's 2008 U.S. Senate special election, when former Democratic Gov. Ronnie Musgrove debated Republican Roger Wicker. Wicker won that race and is up for re-election in November when he faces a challenge from Democratic House Minority Leader David Baria.

In his press release, McDaniel said Hyde-Smith's decision to skip the debate would send "the message that the so-called elites are above accountability—that they don't have to answer to the people."

"I reject the establishment's approach to representation," McDaniel said. "It's a top-down approach that tries to take the people out of the equation. And I hope Cindy Hyde-Smith will reject that elitist approach to ruling as well."

When Hyde-Smith appeared at the Neshoba County Fair in Philadelphia, Miss., in August, McDaniel supporters jeered and held up signs reading "DEBATE" as Hyde-Smith spoke. One McDaniel supporter, Carol McCarty of Madison, told the Jackson Free Press that her biggest misgiving with Hyde-Smith was her unwillingness to debate.

Like Hyde-Smith, incumbent Wicker has declined to join his challenger, Mississippi State Rep. David Baria, for a debate.

Mississippi voters choose between Bartee, Espy, Hyde-Smith and McDaniel in a nonpartisan election on Nov. 6—the same day as the national midterms. If no one gets more than 50 percent of the vote, the top-two vote-getters will face one another in a runoff. Wicker and Baria also face off that day. Polls in Mississippi are open from 7 a.m. to 7 p.m.