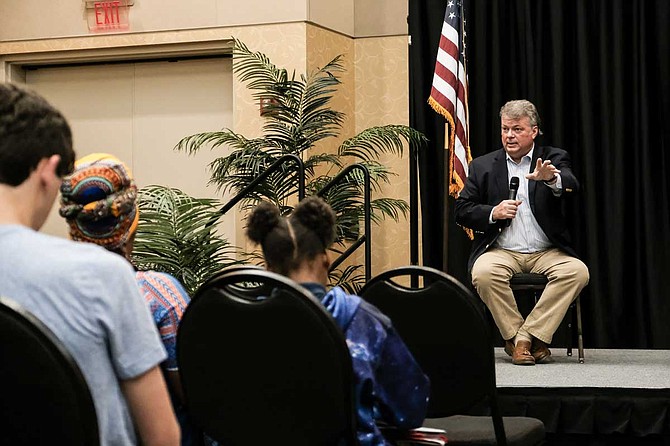 Mississippi Attorney General Jim Hood took questions from audience members at a town hall in Hattiesburg, Miss., on April 16, including from Anastassia Doctor, who asked him about old yearbook photos that showed members of his fraternity wearing blackface. Photo by Ashton Pittman.

After the photos surfaced in February, Hood, who is also a Democratic candidate for governor this year, said in February that he was not in the photos and never wore blackface.

"When I go hunting, I don't even like to wear a mask," he told reporters at the time, saying masks make him uncomfortable, and face paint would, too.

At a town hall event at the University of Southern Mississippi on Tuesday, Anastassia Doctor, who is African American, asked Hood why he never addressed the "racial implications" of blackface. She sat near the front of an audience of around 50 people, her two young daughters on either side of her.

"As black voters, we've been shown benign neglect over and over again," Doctor told Hood. "And politicians, especially in the Democratic Party, have been racially tone deaf."

"Well, I thank you for patiently sitting here while your two daughters kind of got sleepy—they had to do their homework, poor things," Hood said. "I get what you're saying. I understand what you're saying. My whole career as a district attorney, as an assistant attorney general, I have had people appointed to jobs in my office that make our office, every time, look like the state of Mississippi."

Doctor, unimpressed that Hood responded by talking about his commitment to diverse hiring practices, began to interject, but Hood stopped her.

"I'm trying to answer your question if you'll let me," Hood said .

The Democratic attorney general then repeated that he was not in the photo, and was not sure he was still in the fraternity at the time it was taken.

"I don't even know when the picture was made, so to paint me with that is a little unfair, you know?" he said. "And especially if you look at my history and the cases that I've handled. The people I've fought for are the people who are the least among us no matter what their race was. I've got a record of doing that, and I'll continue doing that as governor of Mississippi."

In 2005, Hood oversaw the prosecution and conviction of Edgar Ray Killen, the klansman who planned and directed the "Mississippi Burning" murders of three young civil-rights workers in Neshoba County in 1964.

After the town hall ended, Doctor told the Jackson Free Press she was unhappy with Hood's response and would not vote for him. Talking about diversity is not enough, she said.

"You didn't say anything about the racial implications," she said. "You just skirted over and went to talking about hunting. And that's not OK anymore. We're not doing that anymore. We're not taking it anymore. And if you can't answer those hard questions, then why are you there?"

Doctor, who is from New York, said she moved to Mississippi recently, and is aghast at the state flag, which includes the symbol of the Confederacy, and was shocked recently when she saw Confederate flags flying on graves at a cemetery in the Hattiesburg area.

Politicians like Hood, she said, should be willing to confront the South's history of racism. She pointed to Mississippi's history of lynching, and the way white racists used blackface to mock African American pain.

"Blackface is a mockery and dehumanizing toward black people, and ... the only thing you have to say is, it's smothering you?" she told the Jackson Free Press.

Doctor said she was also unhappy with the answer Hood gave to another town hall attendee, who asked the attorney general if he believes transgender school children should be allowed to use bathrooms that correspond with their gender identity.

"You know, that's up to local school boards," Hood replied. "And that's a decision they should make. ... In schools, I think it's up to school boards and universities as to who goes where."

Before the photos of Hood's fraternity surfaced, one of his Republican opponents in the race for governor, Lt. Gov. Tate Reeves, came under scrutiny after state media published photos showing members of his own college fraternity, Kappa Alpha Order, wearing blackface. Right next to the page where the offensive photos appeared in the 1993 Millsaps College yearbook, Reeves' headshot is among those of his fellow Kappa Alphas.

At the time, he said he was not in the photos. In February, Hood declined to criticize his rival.

Before he was state attorney general, Hood was the district attorney of Mississippi's 3rd Circuit Court District in north Mississippi.

While Hood declined to criticize Reeves for his fraternity's photos, he implied that the lieutenant governor should be judged for a 2013 speech he gave to the Sons of Confederate Veterans, known as SCV, surrounded by Confederate flags. Earlier this year, Reeves deleted a photo from the event that has been on his Facebook page since 2013, but the Jackson Free Press preserved a screenshot of that post.

"I think we should judge people ... when they're actually already in office and speaking at an event filled up with rebel flags," Hood told reporters in February. "That sends a bad message to about 38, or really, about 50 percent of the people in our state. So I think we should be judged on what we've done afterwards."

Mississippi is about 38 percent African American.

SCV is a pro-Confederate organization that pushes a revisionist history designed to dispute the idea that the South fought the Civil War over slavery. The group's official website claims that "the preservation of liberty and freedom was the motivating factor in the South's decision to fight the Second American Revolution."

Historic records show that claim is false. The Mississippi Declaration of Secession said in the very second sentence that the state's "position is thoroughly identified with the institution of slavery." And Confederate Vice President Alexander Stephens, upon unveiling the Confederate Constitution, made it clear that slavery was the core issue, as well as white supremacy. The CSA, he said, rejected Thomas Jefferson's words in the Declaration of Independence that "all men are equal."

"Our government is founded upon exactly the opposite idea," he said. "Its foundations are laid, its cornerstone rests, upon the great truth that the negro is not equal to the white man; that slavery subordination to the superior race is his natural and normal condition. This, our new government, is the first in the history of the world based upon this great physical, philosophical, and moral truth."

Despite such clarity in the historical record, in Mississippi and across the country, SCV seeks to whitewash that history with a narrative that claims that the war was not over slavery and that slaveholders here were freeing them, when in fact the state had passed an anti-manumission law in the years before the Civil War, outlawing the freeing of slaves. But politicians like Reeves and Mississippi Gov. Phil Bryant, a member of the organization, continue to associate with SCV.

In 2016, the Jackson Free Press revealed that Bryant quietly proclaims Confederate Heritage Month every April at the behest of the SCV. And in June 2018, the organization gave Bryant the John J. Pettus Heritage Award, named for the slaveholding Mississippi governor who led the state's secession in order to preserve the institution of slavery.

Other Republicans Under Scrutiny

Earlier this month, yearbooks photos from the 1970s surfaced showing Andy Taggart, a Republican candidate for attorney general, taking part in a skit along with two men who were wearing blackface. Taggart was not wearing blackface but told WLBT he regretted it.

"It's a snapshot, and it's not a snapshot of my life or my heart, or choices that I've made since then," he said.

In March, one of Taggart's Republican opponents, state Rep. Mark Baker, said the 1965 Voting Rights Act violated Mississippi's "sovereignty"—an argument commonly used in the 1950s and 1960s by segregationists who opposed new civil rights laws. Baker told the Jackson Free Press he did not mean to imply that the Voting Rights Act was wrong when Congress passed it in 1965, but that he supported the Supreme Court's decision to strike down a key provision of it in 2013.

Brandon Rue, an African American student activist who is running for a state House seat, organized Tuesday's town hall. At the event, Hood also reiterated his calls for Mississippi to expand Medicaid and for a higher teacher-pay raise than the one the Legislature passed last month.