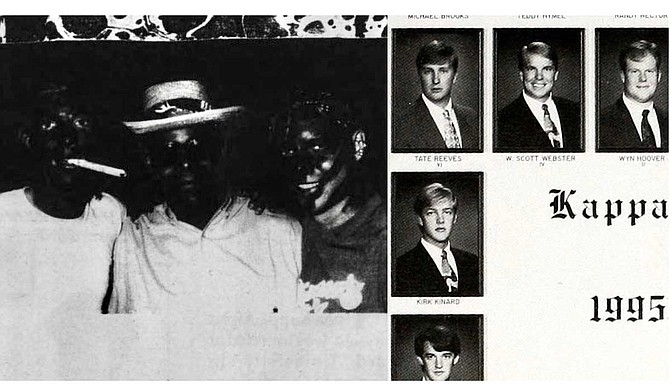 Photos from Millsaps College’s 1993 through 1996 newspapers and yearbooks, when Lt. Gov. Tate was a student there, show members of his fraternity, Kappa Alpha, dressing in blackface and other racist costumes. Photos credit: Purple and White/Bobashela. Photo by Bobashela

JACKSON — As a student at Millsaps College in Jackson, Mississippi Lt. Gov. Tate Reeves participated in a fraternity known for blackface, racial epithets and Confederate dances, a Jackson Free Press examination of Millsaps yearbooks and newspapers from his time there shows. Reeves is a 2019 Republican candidate for governor.

Kappa Alpha Order's pages in the 1993 through 1996 editions of Millsaps' yearbooks show him pictured among its members. Their pages also show unidentified members in racist costumes.

In one photo from a Millsaps College yearbook, members of the Kappa Alpha fraternity are pictured in drag, with one wearing an afro wig. Photo courtesy Bobashela

One photo shows three Kappa Alphas wearing blackface, with one smoking a cigar. Another shows members dressed in drag, with one wearing an afro wig. One from a luau party shows shirtless members in blackface, wearing afro wigs and evoking "savage" imagery.

In another photo, a member of Kappa Alpha has dark paint on his face with the Confederate 'X' crisscrossing between his eyes. It is not clear if the student in the black and white photo wore black face paint or dark blue.

In Reeves' freshman year, an add for the fraternity in the Nov. 10, 1993 issue of the Purple and White newspaper included a 1966 photo in which new recruits received invitations from what appears to be a child dressed in a mammy uniform, like that of a slave era housemaid.

The yearbooks list a "Black and White Party" as a social event the fraternity engaged in, along with the Old South Ball. Yearbook photos show pictures from the ball during Reeves time, with the fraternity's all white men wearing garb akin to that of Confederate soldiers and their dates dressed as southern belles.

Members of Kappa Alpha at Millsaps would paint their face dark with a Confederate ‘X’ across it, as seen in this yearbook photo. Photo courtesy Bobashela

While Reeves was in Millsaps' chapter of Kappa Alpha, the fraternity had a reputation for racist incidents. In 1994, the school newspaper reported an altercation between members of Kappa Alpha and some black students in which members of Reeves' fraternity called them the n-word.

After the incident, the black students targeted with the epithets were talking to WLBT about what happened when members from another fraternity, Kappa Sigma, showed up and told one of them to "engage in oral sex with his 'white genitals.'"

The Millsaps administration ordered Kappa Alpha and Kappa Sigma to pay for and attend sensitivity training, and put them on social probation. Photos of students wearing racist costumes and holding Confederate flags, though, continued to appear in subsequent yearbooks.

In an op-ed, author Kiese Laymon, one of the students whom the epithet was directed at, sarcastically suggested that while Kappa Alpha was the most obvious manifestation of racism on campus, institutional racism persisted throughout Millsaps.

"At Millsaps, I know we've overcome racism, and if the word 'n--ger' is ever muttered, it could only be echoed in the walls of the Kappa Alpha House," he wrote.

Laymon wrote about his experiences as a black man in Jackson in the 1990s in his book of essays, "How to Slowly Kill Yourself and Others in America." 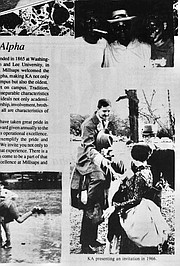 An Alpha Kappa ad in the Nov. 10, 1993 issue of Millsaps' student newspaper, the Purple and White, included a 1966 photo of someone dressed in a mammy costume delivering invitations to new recruits.

In a press statement Friday, Reeves' communications director, Laura Hipp, did not address the instances of blackface, but did address the Confederate parties.

"Like every other college student, he did attend costume formals and other parties, and across America, Kappa Alpha's costume formal is traditionally called Old South in honor of the Civil War veteran who founded the fraternity in the 1800s," she said.

Kappa Alpha was known for chanting "1 2 3! Robert E. Lee! The South shoulda won!" They still describe Robert E. Lee, a slave owner and Confederate general who whipped and poured salt into the wounds of escaped slaves, as their "spiritual founder."

In one of Reeves' yearbooks, the Kappa Alpha page seems to reference him: "Are Justin and Tate at the Robert E. Lee bar?" it reads.

"As Gentleman of the Kappa Alpha Order, we also remember the birthday of our spiritual founder, Robert E. Lee," the post reads.

On Friday, a Democratic PAC, American Bridge, posted some of the yearbook photos on its site, American-Ledger. The Jackson Free Press began examining Reeves' yearbooks and the Millsaps College news reports from his time there on Wednesday.

In a statement to the Jackson Free Press Friday afternoon, Millsaps College said it "engaged with these issues at the time by facilitating conversations between the Black Student Association, the administration, and the fraternity, and today we continue to confront the difficult and important issues of truth, racial healing, and reconciliation."

The national Executive Council of Kappa Alpha Order, it noted, "adopted new regulations in 2015 that forbid any function 'with the name Old South or functions with any similar name.'" That directive, the college said, was "implemented and supported" by the college.

"Within the last three years, several African-American men have been invited into and accepted membership in Millsaps' chapter of the Kappa Alpha Order," the college said. "Relative to the images of members of the fraternity shown in blackface, the decision to publish those and any other similar photographs was a mistake. Those actions were offensive to African-American students, and not in line with our values at Millsaps."

Millsaps is a private Methodist college.

"Millsaps is a leader on issues of civil and human rights and was the first college or university in Mississippi to voluntarily integrate," Friday's statement continues. "Within the past 30 years, African American men have been invited into and accepted memberships with all fraternities on campus, including Pi Kappa Alpha, Lambda Chi Alpha, Kappa Sigma, and Sigma Alpha Epsilon. The College also hosts a chapter of Alpha Phi Alpha Fraternity, Inc."