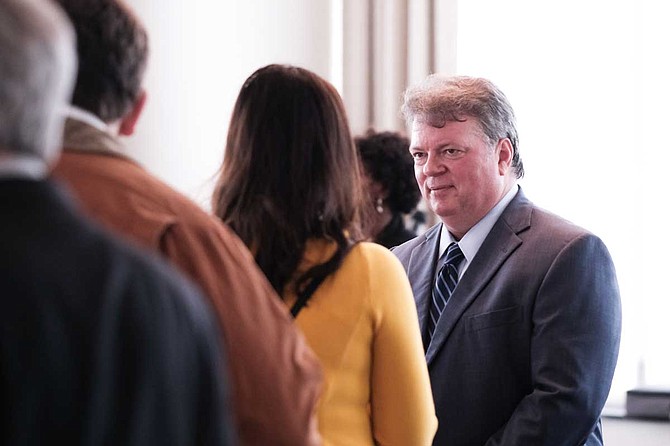 Attorney General Jim Hood said he has never worn blackface, but urged voters to judge him and his likely Republican opponent, Lt. Gov. Tate Reeves, by their current records on race and civil rights—not by what they did in college. Photo by Ashton Pittman.

JACKSON — Mississippi Attorney General Jim Hood "did all kinds of stupid things in college," but he is "sure" wearing blackface is not one of them, he told a crowd in Jackson on Monday.

The topic, which media raised at a Stennis Institute luncheon, comes after several news outlets reported a photo from a party in the early 1980s in which members of Hood's fraternity at the University of Mississippi appear with their bodies and faces painted black. White markings on the men's faces appear to mimic African tribal face paint.

Members of Mississippi Attorney General Jim Hood's fraternity, Pi Kappa Alpha, wore blackface in a photo in the University of Mississippi's 1983 yearbook. Hood says he is not in the picture and never wore blackface. Photo courtesy The Ole Miss Annual

Hood is not listed among the members on the the Pi Kappa Alpha page where the photo appears in the 1983 yearbook.

"I saw the picture that they put in the paper," the Democratic candidate for governor said. "I thought it was a Kiss concert where they had their faces and bodies painted."

Hood said he did not know what the party was, or if he was even still at UM at the time the photo was taken, but said he is not in it. In fall 1983, he took a job in the oil and gas industry and was not a student at UM, he said. He never would have painted his face regardless, he said.

"When I go hunting, I don't even like to wear a mask," Hood said.

On Friday, one of Hood's Republican opponents in the race for governor, Lt. Gov. Tate Reeves, came under scrutiny after state media published photos showing members of his own college fraternity, Kappa Alpha Order, wearing blackface. Right next to the page where the offensive photos appeared in the 1993 Millsaps College yearbook, Reeves' headshot is among those of his fellow Kappa Alphas.

'We Should Be Judged On What We've Done Afterwards'

While Hood declined to criticize Reeves for his fraternity's photos, he implied that the lieutenant governor should be judged for a 2013 speech he gave to the Sons of Confederate Veterans, known as SCV, surrounded by Confederate flags. Sometime in the past few days, Reeves deleted a photo from the event that has been on his Facebook page since 2013, but the Jackson Free Press preserved a screenshot of that post. 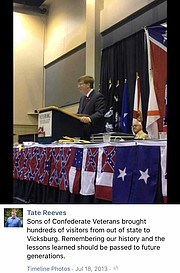 A screenshot of Lt. Gov. Tate Reeves' Facebook page shows a now-deleted image of him speaking at a Sons of Confederate Veterans event in 2013. Photo courtesy Facebook

"I think we should judge people ... when they're actually already in office and speaking at an event filled up with rebel flags," Hood said. "That sends a bad message to about 38, or really, about 50 percent of the people in our state. So I think we should be judged on what we've done afterwards." Mississippi is about 38 percent African American.

SCV is a pro-Confederate organization that pushes a revisionist history designed to dispute the idea that the South fought the Civil War over slavery. The group's official website claims that "the preservation of liberty and freedom was the motivating factor in the South's decision to fight the Second American Revolution."

Historic records show that claim is false. The Mississippi Declaration of Secession declared, in the very second sentence, that the state's "position is thoroughly identified with the institution of slavery." And Confederate Vice President Alexander Stephens, upon unveiling the Confederate Constitution, made it clear that slavery was the core issue, as well as white supremacy. The CSA, he said, rejected Thomas Jefferson's words in the Declaration of Independence that "all men are equal."

"Our government is founded upon exactly the opposite idea," he said. "Its foundations are laid, its cornerstone rests, upon the great truth that the negro is not equal to the white man; that slavery subordination to the superior race is his natural and normal condition. This, our new government, is the first in the history of the world based upon this great physical, philosophical, and moral truth."

Despite such clarity in the historical record, in Mississippi and across the country, SCV seeks to whitewash that history with a narrative that claims that the war was not over slavery and that slaveholders here were freeing them, when in fact the state had passed an anti-manumission law in the years before the Civil War, outlawing the freeing of slaves. But politicians like Reeves and Mississippi Gov. Phil Bryant, a member of the organization, continue to associate with SCV.

In 2016, the Jackson Free Press revealed that Bryant quietly proclaims Confederate Heritage Month every April at the behest of the SCV. And in June 2018, the SCV gave Bryant the John J. Pettus Heritage Award. The award is named for the slaveholding Mississippi governor who led the state's secession in order to preserve the institution of slavery.

On Monday, Hood told members of the press he has never spoken to the SCV.

"I don't even know if it exists anymore," he said.

SCV does still exist, of course, and runs Beauvoir, Confederate President Jefferson Davis' last home on the Mississippi Gulf Coast. Each year, Mississippi earmarks $100,000 in taxpayer funds to the privately-owned and privately-run historic home's preservation, an investigation by The Smithsonian Magazine and the Investigative Fund at The Nation last year found. Between August 2005 and May 2010, $17.2 million in federal and state funds went to Beauvoir for Hurricane Katrina related damages. But more than $8.3 million of that was used to build a museum and library.

'We Hid Our History Because We're Ashamed of It'

For weeks, Virginia Gov. Ralph Northam has been at the center of a controversy over a photo on his medical-school yearbook page. That photo shows one man wearing blackface next to another man in a Ku Klux Klan robe. Northam initially apologized for the photo, but later reneged and said he was neither of the men pictured.

"The Klan was a joke" when he was a college student, Hood said. "We all thought they were dead and gone, you know. I didn't learn anything about it in our history books."

A quick glance at the 1983 Ole Miss yearbook, though, makes it clear that the Klan made its presence known on the UM campus in the early '80s. The pages are replete with photos of klansmen rallying on the campus in 1982 and 1983. In one, a young black girl peers fearfully at the camera, looking over the shoulder of a hooded klansman.

Hood said he came to appreciate Mississippi's history of racism and its continuing impact when he prosecuted Edgar Ray Killen, the klansman who planned and directed the "Mississippi Burning" murders of three young civil rights workers in Neshoba County in 1964. In 2005, Hood oversaw the prosecution and conviction of Killen on three charges of manslaughter.

What he didn't learn from history books, Hood said, he learned while working on that case.

"I saw the fear in the eyes of, not just African Americans, but Choctaw Indians, and how they were treated in that era," he said. "And I began to learn—I started reading about our history and what all happened. And that's why (Mississippi has) been held back all these years, I think, because we hid our history because we're ashamed of it."

He praised the Mississippi Civil Rights Museum, which opened in 2017, for bringing that history alive, calling it "one of our greatest assets."

Hood: I'm Not Going to 'Dupe People' on Abortion

During the luncheon, Hood also answered questions about two "fetal heartbeat" bills in the Legislature that would act as de facto bans on abortion. If either becomes law, it will almost certainly face challenges in federal court. Right now, Hood is defending a bill the Legislature passed last year that bans abortions after 15 weeks.

"I've defended every bill the Legislature has passed on abortion. That's my duty as attorney general," Hood said, adding that he does not "personally believe abortion is right."

Still, Hood said, he will not promise to be a governor who will end abortion—because that is not in the governor's power.

Abortion-rights activists in Mississippi told the Jackson Free Press last week that they believe the goal behind passing these bills is to get the issue before the U.S. Supreme Court—especially now that Justice Brett Kavanaugh, who has a history of anti-abortion decisions, is on the court.

"These six-week bans have always been an attempt to push a direct challenge to Roe," Laurie Bertram Roberts, co-founder and director of the Mississippi Reproductive Freedom Fund, told the Jackson Free Press last week. "They are automatically unconstitutional under current precedent, right? Now, the difference is that, whereas people were hesitant before to support it because they knew it was going to be unconstitutional, right now, with (Justice Brett) Kavanaugh on the Supreme Court, they think they have a shot."

Both Reeves and his Republican primary opponent, Rep. Robert Foster, R-Hernando, support the heartbeat bills. In a tweet, Reeves urged support for the bill and for "ending the barbaric practice of ending life in the womb even though a heartbeat is plainly detected."

The American Pregnancy Association says fetal heartbeats may be detectable as early as at six weeks gestation. Nearly all abortions take place after that point, because most women do not know they are pregnant at six weeks.

Medicaid, Transparency, 'Crazies on Both Extremes'

At Monday's luncheon, Hood emphasized the importance of expanding Medicaid in Mississippi to keep rural hospitals open and open the program up to an additional 300,000 more Mississippians.

He also called for a law that would make the Legislature accountable under the Open Records Act. That way, he said, the public will be able to find out "who is scratching their backs and who they are doing special favors for."

In a press release last week, the Mississippi Republican Party attacked Hood for donating to California Attorney General Xavier Becerra. The statement noted that Democrats “tapped (Becerra) to give their Spanish language response to President Trump’s State of the Union Address” last week and that he has been called “the leader of the Trump resistance.”

“Despite Jim Hood’s attempts to play a moderate, he is funding and working with hardcore liberals,” MSGOP Spokesperson Jennifer Dunagin said. “In his speech, Becerra asked Democrats to ‘imagine if we had the power to decide this nation’s political agenda.’ If he and the national Democrats have their way, their ally Jim Hood will give them that power in Mississippi.

On Monday, though, Hood said he is not worried about GOP efforts to tie him to national Democratic figures like Becerra or Speaker of the House Nancy Pelosi.

During his remarks, Hood said he would not be beholden to either party, because "crazies on both extremes of our parties have been driving the agenda."

"This is a sad beginning for someone who wants to be Governor," Bryant tweeted in response to Hood's "crazies" remark Monday evening. Reeves approved Bryant's assessment with a retweet.

This story has been updated to clarify that, when asked, Attorney General Jim Hood said he had never worn a Ku Klux Klan costume.