Yep, JPS Takeover Is a Conspiracy. Prove Me Wrong. 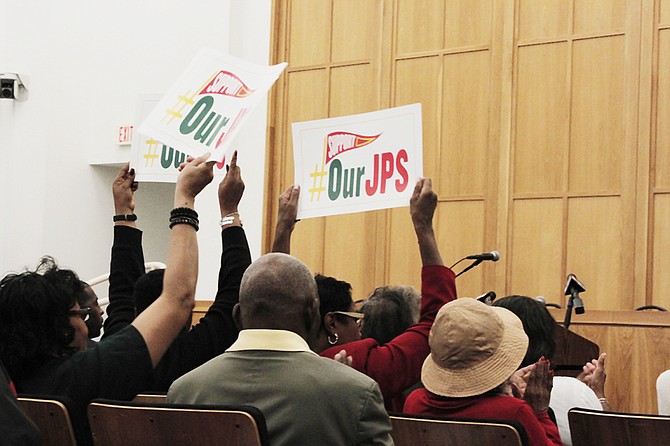 Our schools are squeezed into corners where failure is likely, and a few of them manage to excel anyway. And even the "good" schools are then loaded onto the takeover ship because you know even academically brilliant kids now go to school in an "F" district. Put that on their resume. Photo by Arielle Dreher.

The disrespect said it all, really. After the Mississippi Board of Education came back into the hearing room in the old Central High School, it not only declared an "emergency" in Jackson Public Schools, setting a "takeover" into motion, but it went a nasty step further.

The board insulted the hard-working interim JPS superintendent, Freddrick Murray, who was present, by announcing that Dr. Margie Pulley would become the new superintendent. Huh. It's one thing to argue, rightfully or wrongfully, that the State of Mississippi can run our largest urban district better than locals can. It's another to take a spiteful swing at the administrator in the room who is trying to fix the problems.

But the State displayed that tone throughout the kangaroo court designed to wink-wink give the district a proper hearing. It claimed JPS hadn't done enough to fix problems (that occurred under prior leadership) due to an audit that just came out Aug. 31, a couple weeks before, so they had to hurry before the fixes were in.

It was the second such circus Jackson has faced in the past two years. The first was Rankin County white Republicans' push to take over our airport because, you know, they want it—and its revenue potential.

The predictability of all this takeover hoohaa isn't lost on anyone who comprehends Mississippi's history of racial dynamics, white flight and victim-blaming. The state has a long history of white folk running when too many people of color move too close and start owning and running stuff and enrolling kids in "our" schools.

Don't forget that Central High School, as well as others like Murrah, were jewels in the crown of white Jackson back before forced integration—in a time when white conservatives abundantly funded public schools and extracurricular activities with tax money for their own. But when the black kids came, suddenly they were bad ole "government schools," as some old-time Central and Murrah grads call them now.

The worst part fully hit me on a recent Delta road trip as I stood before the old Delta Democrat-Times offices in the once-thriving downtown Greenville, now across the street from a casino entrance with a whole lot more black people than white evident in the area near it. The old office where Hodding Carter Jr. won his Pulitzer for changing his segregationist views and challenging racists is abandoned with cracked windows and a historic marker.

"They flee and burn it all down behind them," I told Todd angrily in the car. What I meant was the tragedy not just of so many white people rejecting a fully integrated life for their families, but how they then try to legislatively and politically ruin what's left. They not only take their tax money, but they pass laws trying to keep public dollars from flowing to where they're needed, including now-poor schools, and try to redirect it to institutions they control.

It's like they leave and never look back except to say (a) we don't care how bad our actions make it and (b) if you manage to build it into something anyway, we're going to come back and take it again, teeheehee.

Now, if you don't agree with that recounting of local history, feel free to start proving me wrong by staying put and investing time and resources in diverse communities rather than running to a cow pasture or a flood plain and trying to build your own white-run paradise. Until it gets too diverse, of course, and you load up the U-Haul to move further into rural Mississippi and start all over again, leaving dead malls and crumbling schools in your wake.

Schoolchildren have long been the pawns in this power game. I snickered when I saw that The Clarion-Ledger declared in bold headlines that the JPS takeover vote was "NOT A CONSPIRACY" a week after it published an editorial supporting it, without having done enough reporting to know whether it was a good idea or not. (Sigh.) The Ledger's editorial logic was typically facile, arguing that the State has to take over JPS because it took over earlier schools, and it would not be fair not to. Got it.

Worse, though, was such a naive declaration that what we're seeing right now couldn't possibly be part of a larger plan to either control and/or close "government schools." We have a supermajority in the Legislature that won't even fund repairs to dangerous roads and bridges, and that sent Bubba out there to warn white folks not to vote for the education-funding initiative because that scary black judge down in Jackson would decide who got the money. 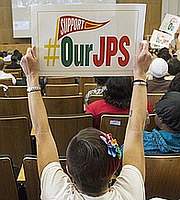 We have a lieutenant governor who insults Mississippians' intelligence by telling us more funding needs to go to schools in wealthier districts because, you know, they're getting more bang and high test scores for their buck (despite all the evidence about the poverty-trauma-crime problems that keep many poor kids from excelling). Leaders openly campaign for vouchers in whatever form they can shape them in order to get public funds for their own private schools. They punish public schools for not achieving what they can't afford to, while testing and suspending kids into submission.

That is, our schools are squeezed into corners where failure is likely, and a few of them manage to excel anyway. And even the "good" schools are then loaded onto the takeover ship because you know even academically brilliant kids now go to school in an "F" district. Put that on their resume.

This manufactured crisis is designed to fail for political reasons. Prove me wrong.

Truth is, I don't like everything or everybody I've seen in JPS. In my work with teenagers, I hear of stellar teachers and experiences, and I comfort students suspended for "talking smart." Undoubtedly, JPS has over-used punitive policies that push out too many kids—but guess what? That's probably the only part the State likes about the district, considering the people they think should replace our district's leaders.

The tragedy is that JPS could use outside help to fix problems (and better school-board members, over all). And, frankly, superintendents who don't moonlight as preachers. We can't pray our challenges away. We need to work hand-in-hand with experts who don't have JPS failure as a high priority and don't condescend to our administrators, educators, children, parents and advocates along the way.

But our savior is supposed to be the State of Mississippi with all its political baggage, power trips and favors for a friend? Yeah, right.