Honor, Authority and Joy in JPS Priorities of Jackson Community 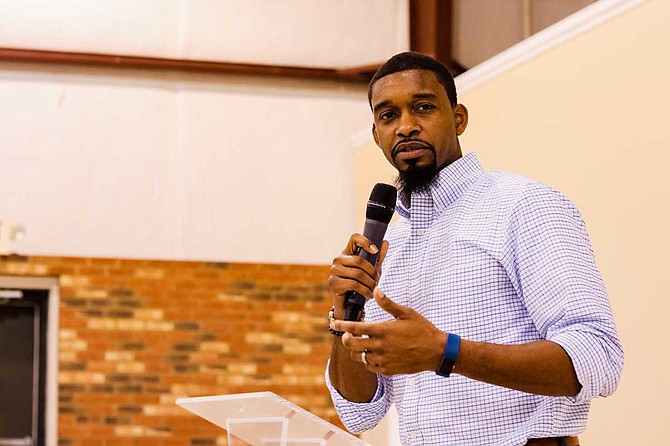 Tyrone Hendrix speaks at the Jackson Revival Center Church March 1 on the sense of urgency that lead him to help create OurJPS after the Mississippi Department of Education almost took over Jackson Public Schools. Photo by Taylor Langele

JACKSON — White poster board covered a crimson brick wall in the Jackson Revival Center Church on Terry Road displaying the hopes that a plethora of community members imagined for the future of Jackson Public Schools. Statements such as "honor" and "authority" shared the wall with "social and emotional learning" and "joy."

The March 1 meeting was one of various forums an organization called "Our JPS" has organized across the city to learn the ideals local residents want to see reflected inside local public schools. OurJPS formed in response to a looming state takeover of Jackson Public Schools as a hub for community leaders around Jackson to gather and provide assistance the district requested.

"Oftentimes, the community has been disconnected to what has been happening in the district. Parents and community members need to hear that that is changing" Treshika Melvin, community advocate of the Southern Poverty Law Center, said to the Jackson Free Press. "Community members have not always been up to date, involved, or have even been asked on the front in to be involved."

Responding to a Takeover Attempt

In October 2017, Gov. Phil Bryant decided to opt out of a recommended Mississippi Department of Education takeover of the JPS system. Instead, Bryant chose to partner with Mayor Chokwe A. Lumumba and the W.K. Kellogg Foundation to give the community the opportunity to bring Jackson Public Schools into a new era.

As a result, On Thursday, Nov. 29, 2017, commission members released findings from a student-centered study of the district that an organization called "Insight Education" conducted over nine months. The study, paired with a range of community-engagement activities, focused on identifying the strengths and opportunities such as student leaders, experienced staff members, and invested community members to help every JPS student receive a quality education.

The review was the first in a six-part approach to revive JPS and will combine with community forums, central office focus groups, assessment of programming for struggling students, analysis of district finances and meetings with key stakeholders.

Financial and structural assessments have led to critical strides such as a $65-million bond for structural improvements to the hiring of a long-awaited superintendent on Aug. 22 of last year.

In reference to the change in dynamic between community and district, Melvin had this to say to the Free Press, "I think the district is ready and willing to engage these issues and challenges with the community and not (as before) behind closed doors."

Dr. Michael Cormack, JPS chief of staff and transition manager, described to the Jackson Free Press the impact public outreach has had to date: "In all spaces around the community people are reaching out to us. Whether it's in the gym, at Starbucks, in the church or wherever people are saying, 'We're really pulling for you all,' and 'We want the district to be successful. Let us know how we can help."

"Community forums are vital because we are able to own the issue of improving our graduation rates and get prolific feedback from parents and families on how we can improve these numbers together," Cormack added.

JPS Reforms Ahead for Teachers and Students

Another crucial function of these meetings is to communicate ongoing reforms within the JPS district such as ways to combat rampant teacher turnover and deficiencies. "Right now," Cormack explained, "we are doing a lot of work in ensuring our support for teachers."

This statement came on the heels of the school board passing a motion to give teachers up to $3,000 to secure a downpayment on a home in the Jackson area as well as the approval of signing bonuses for new teachers. Cormack explained that this is "an initiative to say 'we really value you and see you as important to this transition.'"

However, these are only first steps in planned reforms for this year. JPS is planning structural improvements to schools in the district that have a dropout rate of over 33 percent.

Additionally, the district is working hard to improve literacy rates, especially in the lower grade levels. As quoted in Education Week, 3rd grade reading levels are prolific in defining a child's path to graduation.

Cormack also addressed the district's solution to this problem. "We are very committed to improving literacy outcomes in the lower grades," he told the Jackson Free Press. "Third grade is essential in that it is the grade where students turn from learning to read to reading to learn. We want to bring consistency to instruction across the district. Then we will be able to properly support teacher and ensure quality material for students to engage with."

As of now, the district is still working with Insight partners to find a curriculum that both interests and challenges all students in the district appropriately.