Editorial: A State Takeover is Not the Solution for JPS | Jackson Free Press | Jackson, MS 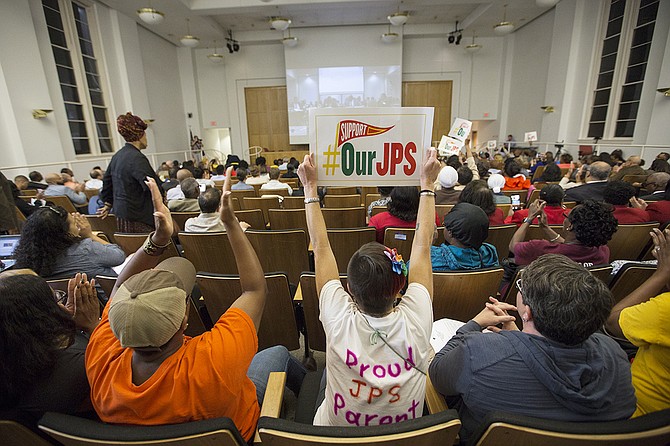 If last week taught State education officials anything, it was that Jackson has people power, and the ability to mobilize parents and advocates to loudly oppose what they see as a detrimental decision for our children. Photo by Imani Khayyam.

The looming state takeover of Jackson Public Schools is full of myriad problems, from the State of Mississippi's less-than-stellar track record of previous takeovers to a lack of transparency and collaboration on the part of Mississippi Department of Education officials.

Eleven of the 16 school districts the State has taken over received a "D" or "F" grade in the 2016 accountability rankings. Only one of those districts has a grade higher than a "C": Scott County School District received a "B."

In the State's previous takeovers, school districts had far fewer students than JPS has. Tunica County School District, where the suggested replacement interim superintendent, Margie Pulley, was most recently, has 2,095 students compared to 25,000+ here. To assume, as The Clarion-Ledger did in its endorsement of the takeover, that "size should not matter" is too simplistic. Size totally matters. JPS is the second-largest in the state, with 58 schools.

Does MDE have the capacity to take over a district the size of JPS? No. It took MDE a full year to complete an investigative audit of JPS, and unless it plans on keeping the majority of the current administrative staff, they will face the challenge of hiring a workforce to run a district like JPS. Plus, many teachers will likely flee the district.

Additionally, Pulley's experience in turning around other districts is on a much smaller scale. If the State bases success on academic performance alone, it will likely take more than a decade to pull more than 25,000 students to a "C" level performance due, in part, to Jackson's broader, systemic problems with poverty, which the new mayoral administration and council publicly acknowledge.

Fixing Jackson's schools—as well as crime—means working to reverse poverty. This is why local control is essential for JPS and for improving academic performance. When students show up tired, traumatized and hungry, learning is a lesser priority. Additionally, the potential for cuts to sports and other extracurricular activities would diminish efforts to keep young people engaged and in school. If home environments are not stable, but school is, sometimes a sports team can mean the difference between staying in school and dropping out.

If last week taught State education officials anything, it was that Jackson has people power, and the ability to mobilize parents and advocates to loudly oppose what they see as a detrimental decision for our children. While the state of affairs at JPS is far from peachy, Interim Superintendent Freddrick Murray has made good on several district-wide changes this year: the reorganization in feeder patterns and structure, 14 new principals and a revamped Code of Conduct with less leeway for unfair punishment for students.

Whether or not those top-level changes trickle down by the fall term's end or even the end of the school year will speak volumes about his ability to lead. In the meantime, a new mayor will fill the school board. Give Jackson a chance to fix its schools by addressing the system and city as a whole.