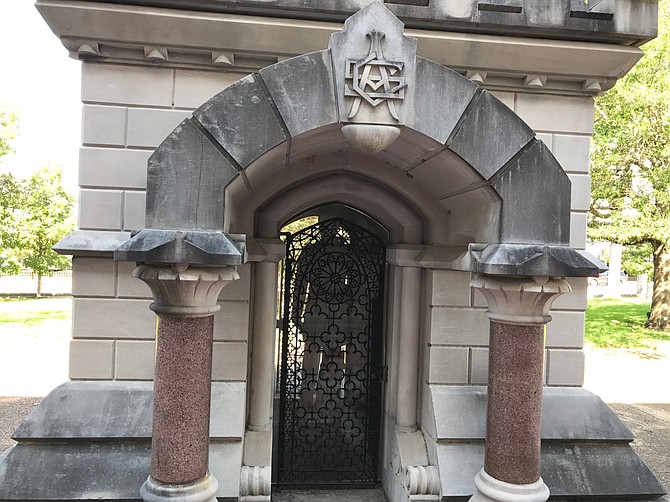 A marble statue of Confederate President Jefferson Davis peeks out of the base of the memorial to the South's role in the Civil War. Photo by Donna Ladd.

I pass six Confederate battle flags on my eight-minute drive to work in downtown Jackson. I also pass the Confederate States of America statue with the face of former Mississippi Gov. John M. Stone, a Tennessee native and Civil War colonel, on a tall pedestal branded with CSA emblems. The statue is in the state's Confederate Monumental Park and sits next door to the Old Capitol where Mississippi voted to secede on Jan. 7, 1861, in order to maintain and expand slavery into "free" states.

The Daughters of the Confederacy erected the ornate monument in 1888 with the Mississippi Legislature's money. Inside it, behind locked glass doors, stands an Italian marble statue of Confederate President Jefferson Davis. He was moved inside the Old Capitol Museum for a while, but after Hurricane Katrina, Davis came home to his crypt inside the memorial in 2009.

I grew up 90 miles from Jackson with odes to the War of Northern Aggression all around me in Neshoba County. We saw rebel flags when we drove to the capital city to eat at segregated restaurants and sit in whites-only doctors' waiting rooms. We may not have had much, but white supremacy was our way of life, and had been injected into me and other whites since the state was settled. It's why many of my ancestors wore a Confederate uniform. 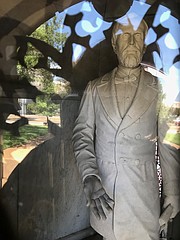 Jefferson Davis is locked inside the Confederate memorial in downtown Jackson.

After losing the war and defeating Reconstruction, Mississippi was rebranded with symbols of the supposedly "lost cause" of slavery. Myriad statues and rebel flags—by then embedded boldly inside our official state flag—kept telling whites that we were still superior to something, somebody.

We learned to count with "Eeny, Meeny, Miny, Moe" ending with catching an n-word by his toe. I still grimace when I see Black-eyed Susans; the flowers were "N-gger's Navels" to us. Those thumb-sized chocolates at Christmas? "N-gger's toes."

The messaging was incessant: Black people were inferior, lazy and had to be kept separate because they would hurt little white girls like me. But they were good at sports, cooking, music. But nothing else.

My history books taught that slavery was good for us and them, that the Civil War was over "state's rights." Mississippi's Declaration of Secession tells us the South left the U.S. so we could own black people because their skin could handle sun better in the fields than our fair European complexions. They had no reason to lie then.

The n-word was probably one of my early words; it was just another noun like "butterbeans" or "hounddog." As I learned to think, logic started taking over for me: It just didn't make a lick of sense to my little brain that Christians didn't mean it for everyone. So I asked adults: Why don't we love them, too? White men called me a "little n-gger lover," trying to put down signs of dissension fast and furious.

The indoctrination continued through school at Neshoba Central in the 1970s. I hated being trapped inside the racist culture. I hadn't yet read the inscriptions of every Confederate statue as I do now, but the seeds of "brain drain" were planted. The culture, with its required hate of "them," was stifling, and I knew I'd be on the first train out of here when I was old enough.

Jim Crow officially ended when our schools reluctantly integrated in early 1970. But, by the mid-1970s, national Republicans, starting with Barry Goldwater and Richard Nixon and soon Ronald Reagan, were urging whites to keep fearing and loathing all the shiftless black men and lazy welfare mothers raising young thugs—and they all wanted to take our stuff, you know. Even a young Haley Barbour was among strategists trying to keep white southerners from turning the corner on our racist past.

It took a CBS TV movie in 1975 to bust open all the history they were hiding from me and other young people. "Attack on Terror" was about the 1964 murders of Chaney, Goodman and Schwerner, which no one had told me about. Then 14, I went to the Neshoba County Library and stared at old headlines in the Neshoba Democrat excusing the horrors the men my family knew well had done.

Since that day, I've made it my business to learn my own history as a white southerner, which is inextricably wound up in what we call "black history" in America. It is not the path easiest traveled to cast off the chains of all this overt and subtle indoctrination, but I've long refused to be part of the conspiracy to keep us all mired inside the prison of white supremacy.

The legacy of slavery, and what it has done to people I'm supposed to fear and hate—and ones I'm supposed to love—is part of who I am as a white Mississippian, and it is a curse on our state and nation.

The only way out is through it, however. Many white people want to just "move on." They'll shudder dismissively if you challenge the myths, preferring to leave the statues and flag and true history alone because it's just "dredging up the past."

They are serving white supremacy whether they mean to or not. The past is not over, and never will be with overt symbols embedded in our state government and our field of vision, like beacons back to an ugly heritage. Changing the flag and the statues won't magically end white supremacy, but it telegraphs that white people are starting to understand how it continues and benefits us even if we don't want it to. It's not so much the flag itself that matters; it's more people wanting to change it that can help save us.

The lost-causers planted the memorials around the nation to keep romantic myths of white "heritage" alive. By the late 19th century, white supremacy required being stuck there, so they created touchstones to make sure we didn't grow and move on.

After Democrats defected the South to pass federal civil-rights laws, a backsliding GOP decided to use white racial resentment to get votes for tax cuts and such. I'm madder at no one more than well-heeled southern strategists who wouldn't give my people a fighting chance to be better than the beliefs of our ancestors by tethering us to our racist heritage for political gain. Now in 2017, a president that their strategy created is building on the same bigotry of low expectations for white people in America.

To finally break this curse, white America must decide to turn the corner on the dark heritage we inherited and stop today's horrifying march backward. We white folks did not do those horrific things then, but it is up to us what we do now. Let's finally take that long overdue leap of faith.