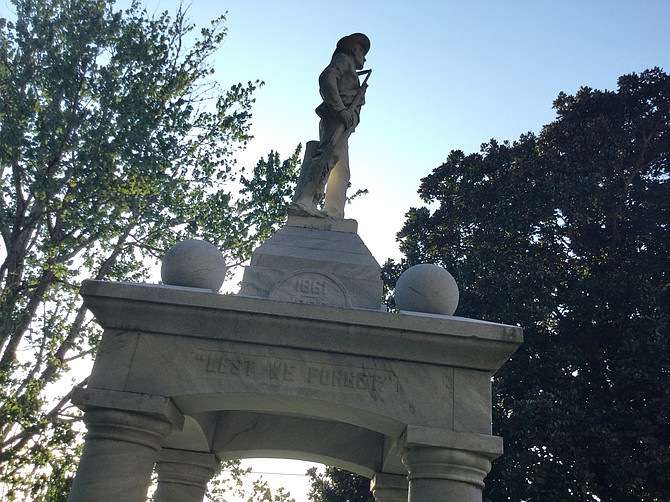 In Ellisville, in the heart of the "Free State of Jones," the memorial is ornate and direct, "less we forget" the Confederate cause. "The principles for which they fought live eternally," one side states. Photo by Donna Ladd.

JACKSON — When Rep. Karl Oliver decided to take to Facebook Saturday night to vent his anger over the Confederate statues coming off public property in Louisiana, he ignited a firestorm over his call for the kind of terrorism the Old South is still known for: lynching. But the Winona Republican also drew attention to the epidemic of Confederate statues in Mississippi, many prominently displayed on courthouse lawns and in public thoroughfares, honoring the reason the South formed the Confederacy.

"The destruction of these monuments, erected in the loving memory of our family and fellow Southern Americans, is both heinous and horrific. If the, and I use this term extremely loosely, "leadership" of Louisiana wishes to, in a Nazi-ish fashion, burn books or destroy historical monuments of OUR HISTORY, they should be LYNCHED! Let it be known, I will do all in my power to prevent this from happening in our State," the Winona Republican and funeral director wrote.

The post was also not factual; the statues are not being destroyed. They are being put in crates. Today, the director of Beauvoir, the Jefferson Davis home on the Mississippi Gulf Coast, invited the statues to come live there.

Oliver left the post up for nearly two days, with criticism exploding after a black legislator, Sen. Derrick Simmons of Greenville tweeted out screenshots of it early Sunday evening, with the Jackson Free Press and soon other media retweeting and following up the story. Oliver issued an apology late this morning for causing embarrassment after GOP leaders called on him to "apologize" and clarify this comments.

"I, first and foremost, wish to extend this apology for any embarrassment I have caused to both my colleagues and fellow Mississippians. In an effort to express my passion for preserving all historical monuments, I acknowledge the word "lynched" was wrong," Oliver said in a statement. "I am very sorry. It is in no way, ever, an appropriate term. I deeply regret that I chose this word, and I do not condone the actions I referenced, nor do I believe them in my heart. I freely admit my choice of words was horribly wrong, and I humbly ask your forgiveness."

'Thoroughly Identified with the Institution of Slavery'

Oliver also did something else other than condone violence—he called attention to the largely ignored memorials and statues that dot Mississippi, the state that recorded the most lynchings— a legacy of murders that the state's two U.S. senators at the time refused to join that body in apologizing for in 2005.

These memorials are just about everywhere you look here—in the middle of the main thoroughfare through downtown Brandon; an audacious display in Ellisville in front of the courthouse where Newt Knight and this band of scalawags resisted the Confederacy; in Lexington where white editor Hazel Brannon Smith won a Pulitzer Prize for condemning Jim Crow segregation; in front of the Neshoba County courthouse where Edgar Ray Killen was finally convicted in the "Mississippi Burning" case 40 years after he helped local cops and the Klan kill civil-rights worker James Chaney, Andrew Goodman and Michael Schwerner.

A Confederate soldier standing on a high pedestal is even visible from the Jackson Free Press offices in Capital Towers in downtown Jackson, not far from where the Mississippi Civil Rights Museum is rising up. There is even a stained-glass window inside Ventress Hall on the Ole Miss campus, purchased for $64.37 from the Tiffany Glass Company by the Alumni Association in New York in 1891, with a glorious Civil War battle scene. "Cum Pietate Alumnorum," one panel begins. "In honor of those who with ardent valor and patriotic devotion in the civil war sacrificed their lives in defense of principles inherited from their fathers and strengthened by the teachings of their alma mater this memorial is lovingly dedicated."

In the front of Ventress Hall, a placard reads, "This building was paid for by the taxpayers of the state of Mississippi."

Of course, after a century and a half of revisionism over the "War Between the States," as some of the memorials call the Civil War, many white southerners have not accepted or still just do not know that the Confederacy formed and launched the war to maintain slavery and ensure that new states would allow it, as well as require the return of any runaway slaves to their owners.

Many historical accounts, from the mouths of Confederate leaders themselves, disprove the popular myth that the South fought the war for any reason other than to protect its "peculiar institution" of buying and selling human beings.

The Mississippi Declaration of Secession was not shy about why the state seceded from the union and joined the Confederacy. "In the momentous step, which our State has taken of dissolving its connection with the government of which we so long formed a part, it is but just that we should declare the prominent reasons which have induced our course," the state declared.

"Our position is thoroughly identified with the institution of slavery—the greatest material interest of the world. Its labor supplies the product, which constitutes by far the largest and most important portions of commerce of the earth. These products are peculiar to the climate verging on the tropical regions, and by an imperious law of nature, none but the black race can bear exposure to the tropical sun. These products have become necessities of the world, and a blow at slavery is a blow at commerce and civilization. That blow has been long aimed at the institution, and was at the point of reaching its consummation. There was no choice left us but submission to the mandates of abolition, or a dissolution of the Union, whose principles had been subverted to work out our ruin."

'The Cause They Loved So Well'

Many of the memorials and statues—some glorifying the soldiers, others the war's cause, others both—sit in many towns now that are overwhelming African American, and many of them poor since the flight of wealth after schools were forced to integrate here in 1970. Where did all the statues on public property come from?

The Daughters of the Confederacy, and later other groups that honor the South's mission and soldiers, raised money and built an intentional "lost cause" movement across Confederate states after the South lost the war and their lucrative institution of slavery. The idea was to romanticize a war fought and lost for very bad reasons, turning a four-year engagement into a badge of continuing "heritage," and perhaps preventing shame in future generations over what had motivated their ancestors.

Some of the Mississippi memorials, indeed, focus almost exclusively on the tragedy of the Confederate soldiers lost to the cause. The statue in Lucedale, for instance, is off to the side of the courthouse lawn and surrounded by a variety of flags, including the rebel flag and the Mississippi version that pays homage to it.

The Lucedale language, however, focuses on the soldiers themselves: "In honor of the men of the George County area who served in the Army of the Confederate States of America," it reads. "These are the men who wore the gray 1861-1865." On the other side, the statue lists the names of the soldiers from the area.

Up in Yazoo City, though, the statue goes much further than honoring the soldiers themselves, accenting that the war was over "the cause they loved so well." It features a woman handing a rebel flag to a Confederate solder holding a rifle.

"As at Thermopylae, the greater glory was to the vanquished," the inscription begins underneath. Then, it honors the "lose cause" of why southerners fought the war: "This monument is erected to perpetuate the memory of the noble courage, constancy and self sacrificing devotion of the women of the Confederacy, and the patriotism and heroic valor of the Confederate soldiers, and all who fought on land or sea for the country and the cause they loved so well."

The Yazoo City statue, which is in a public park near downtown, was erected by the Sons of Confederate Veterans, the Jefferson Davis Chapter honoring Yazoo City Confederate units and the "people of Yazoo County."

Over in Lexington, a Confederate statue stands proud right in front of the Holmes County Courthouse in a town where a sassy white editor, Hazel Brannon Smith, caught grief for her editorials against Jim Crow segregation in the 1960s, winning her a Pulitzer as well as hatred from many white citizens.

The Holmes County statue focuses on the soldiers, but alludes strongly to how they fought for the cause. "To the Holmes County soldiers of 1861-1865, and members of Holmes County Camp No. 398 U.C.V. in memory of their patriotism and heroism and to commend their example to future generations," it reads.

On another side, the UDC statue reads, "Honor to Heroes, is Glory to God."

A Confederate solder stands on top of a four-columned display under shade trees on the courthouse law. One side indicates that Jones County had reclaimed its Confederate heritage, demanding that it live well into the future. "The principles for which they fought live eternally," it reads. The opposite side adds, "Lest We Forget." This one was erected by the Jefferson Davis Chapter of the United Daughters of the Confederacy in 1912, nearly 50 years after the war ended.

Read more about the Civil War, slavery, Confederate Heritage Month and the Mississippi flat at jacksonfreepress.com/slavery.