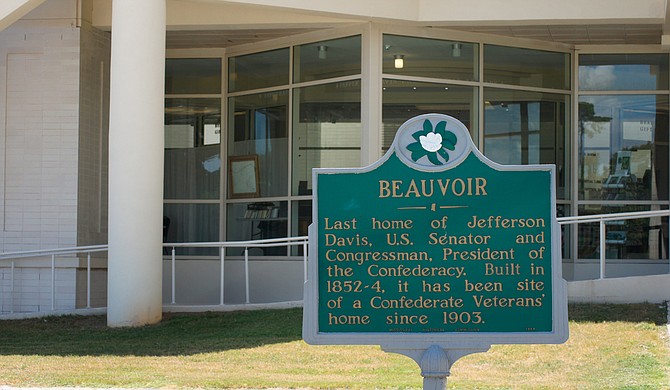 A sign designating the last home of Jefferson Davis sits outside Beauvoir in Biloxi, Miss. Photo by Arielle Dreher.

JACKSON — As the statue of Confederate General Robert E. Lee came down Friday afternoon in New Orleans—along with three other Confederate monuments in the city including Jefferson Davis—the future of the monuments did not seem to be much of a conversation.

Beauvoir Executive Director Dr. Thomas Payne has made it clear: Beauvoir, the site of Jefferson Davis' home and several other Confederate-era monuments and memorials, will gladly invite them to live in Biloxi, Miss.

"We would like to bring his statue home," Payne said of Confederate President Jefferson Davis.

Payne started as executive director on Jan. 1, 2017, for the museum, which is home to a cemetery of more than 780 Confederate veterans in addition to the museum and library.

New Orleans Mayor Mitch Landrieu's office announced the city will facilitate an open RFP process to relocate the monuments to bidders, which have come in from both private and public institutions, according to the Mayor's office.

New Orleans City Council will approve the recommendation brought forth by a public selection committee after the RFP launches in the coming weeks. "We will certainly follow what the mayor's office and what they project," Payne said. "We would definitely look at the RFP."

Payne says Beauvoir has not been in contact with the mayor's office and do not yet know the process for acquiring the monuments, but nevertheless they have interest in bidding.

"We are very much interested in getting the monuments," Payne said. "We appreciate the value of them both from a stand point of the icons of the southern heritage and of the era that we, as a museum, represent."

The institutions that are awarded the statues after the process plays out will be required to place them in "context," which will include why they were erected and the city's choice to remove them in 2015, a press release from the New Orleans mayor's office said.

"If they are serious, if they want to place these in the context they should be, we would be more than happy to oblige them," Payne said.

The nonprofit corporation would have to seek donations, Payne says, if the bidding becomes a financial reach.

"We would use all of the means necessary to raise the money to bring them here," Payne said.

As for right now, the statues will be crated and stored in a New Orleans warehouse as the statues come down, the mayor's office said in the statement.

In other parts of the South, the fate of the monuments continues to be a conversation starter for removal including Baton Rouge and Charlottesville.

Payne says the monuments belong at a museum like Beauvoir to "educate and commemorate" on Southern heritage and history.

"What better place than a museum?" Payne said.

Read more about the Confederacy and its symbols at jacksonfreepress.com/slavery.