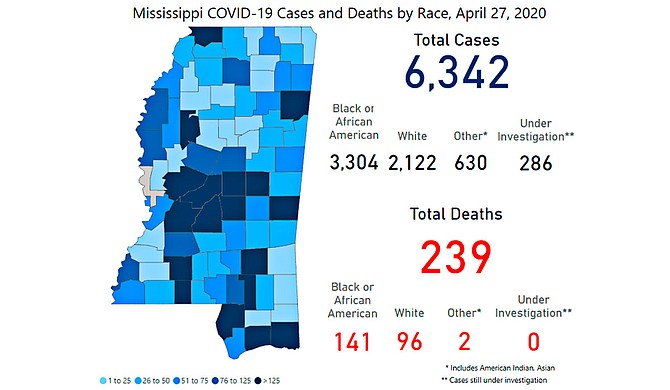 “You have helped us slow the spread of the virus,” Gov. Tate Reeves told Mississippi at yesterday’s COVID-19 press conference. “And because of that, we are able to move towards more and more reopening, at least a life that is more and more normal for more and more Mississippians.”

On Monday, Reeves recapped his “safer at home” order, replacing his April 1 shelter-in-place order for two weeks. The order went into effect at 8 a.m. on April 27 and lasts until 8 a.m. on May 11. “We are monitoring both of those areas, hair salons, barber shops, as well as restaurants, and are trying to find safe ways to get them open as soon as possible,” Reeves said. He added that restaurants are only allowed to provide curbside service.

The day Reeves’ initial shelter-at-home order expired, the Mississippi State Department of Health detected 248 new cases of COVID-19 across the state, in line with the extended “plateau” the viral spread has displayed for over a week now. The state has seen 6,342 confirmed reports of COVID-19 since the beginning of the crisis. Ten new deaths accompanied today’s report, with 239 deaths statewide so far.

“I trust the people of Mississippi to be vigilant, to do the right thing in the coming days and weeks,” Reeves said.

MSDH will continue its practice of withholding the names of long-term-care facilities with COVID-19 infections for now, State Health Officer Dr. Thomas Dobbs said, citing concerns about facility stigmatization and difficulty in employee retention. Dobbs acknowledged, however, that the policy would be subject to continual evaluation. Others states, such as Georgia and North Carolina, are identifying nursing homes with outbreaks.

Reeves cautioned against overly aggressive action against industries in the state’s food supply chain. “There is ... more and more concern nationally, with some of these processing facilities being shut down, that we could find ourselves in America and across the country with inadequate food supply, particularly meat products,” he said.

Dobbs said the agricultural industry has been “very receptive to recommendations for making things safe—and have actually been extremely innovative” themselves in ensuring worker safety and minimizing transmission.

In areas like Scott County, home to a significant immigrant population, Dobbs hoped to assuage community fears by emphasizing that testing and safety concerns in those areas are in no way connected to ICE operations. “This is just a service,” Dobbs said, “a way of helping people, and would in no way be linked to some of the fears that we know could be out there.”

Some Progress on Unemployment Claims

Reeves provided updates on unemployment claim reports, which fell from 45,000 to 35,000 in the previous week. The governor acknowledged that many Mississippians are still having trouble contacting the Mississippi Department of Employment Security by telephone, but said the agency is continuing to bring in new employees. “We had about 50 people on those roles five weeks ago—that net number is now up to 250 people,” Reeves said. MDES paid out $72 million last week, with 75% of that from the federal government.

With the Legislature poised to reopen on May 18, Governor Reeves expects lower state revenues to be a “real challenge,” both across the country and in Mississippi, noting that states cannot use CARES ACT money as a source of revenue.