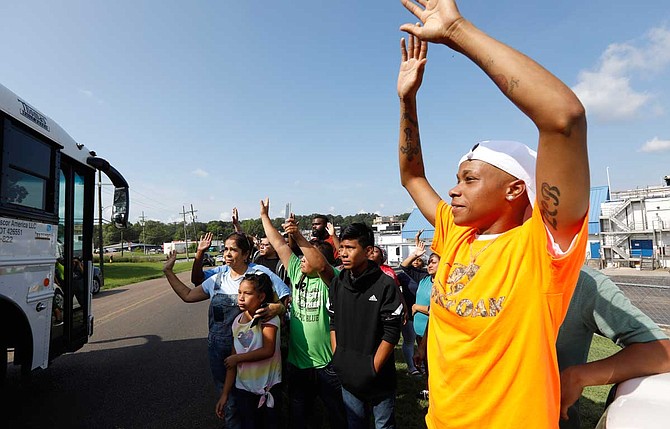 Friends, coworkers and family wave to one of several buses that are filled with detainees, following a U.S. Immigration raid at several Mississippi food processing plants, including this Koch Foods Inc., plant in Morton, Miss., Wednesday, Aug. 7, 2019. The early morning raids were part of a large-scale operation targeting owners as well as undocumented employees. Photo by Rogelio V. Solis via AP

Children finished their first day of school with no parents to go home to tonight. Babies and toddlers remained at daycare with no guardian to pick them up. A child vainly searched a workplace parking lot for missing parents.

Those are some of the many stories immigrants' rights advocates told the Jackson Free Press they heard on Wednesday in calls with school officials, coworkers and distressed family members of immigrants whom ICE rounded up in Mississippi today.

On Wednesday morning in Mississippi, the Homeland Security Investigations unit of Immigration and Customs Enforcement, also known as ICE , coordinated with the U.S. Attorney for the Southern District of Mississippi, Mike Hurst, to carry out what they called the "largest single-state worksite enforcement action in (the) nation's history."

At a 2 p.m. press conference, Hurst said they were rounding up undocumented immigrants who are working in the United States or who might have committed some other crime, but was not specific about charges.

"Let them go! Let them go!" the Associated Press reported family members, including children, crying as Immigration and Customs Enforcement agents loaded immigrants onto buses outside a plant where they worked in Morton, Miss.

ICE carried out raids in five other Mississippi cities, including Bay Springs, Carthage, Sebastopol, Pelahatchie and Canton. Altogether, ICE rounded up 680 immigrant workers and loaded them onto buses. Hurst said they would go to a Louisiana ICE facility for "processing."

Advocates at the Mississippi Immigrants Rights Alliance, or MIRA, spent Wednesday afternoon scrambling to answer calls from distressed family members and to find out exactly what was happening. "We're now trying to deal with schools because of the children that may be left behind by ICE," MIRA President Bill Chandler said.

'They Tased Him, Knocked Him to the Ground'

MIRA organizer Luis Espinoza traveled to Canton on Wednesday to help families trying to pick up the pieces and figure out what to do next, Chandler said. ICE agents attempted to arrest at least one U.S. citizen at the plant in Canton, Chandler reported.

As MIRA understands it, Chandler said, ICE will "sort" the detainees at a facility in Jena, La. Some who have prior violations or have committed felonies will be locked up in facilities to await deportation trials, while others will be returned to their homes at some point with ankle bracelets. That is tantamount to "house arrest," he said. He added that he doubts agents will find many, if any, felons among those arrested today.

"We're trying to put together all the pieces of what (Hurst and an ICE representative) were saying. They were not real clear at the conference," Chandler said. "But we have been talking to the relatives of the victims, so we'll know more later on."

Hurst: 'We're Coming After You'

In Hurst's press conference on Tuesday, he said the raids were simply about upholding the law.

"While we are a nation of immigrants, more than that we are first and foremost, a nation of laws. The rule of law is the bedrock, the very foundation of our great country. Without law, there is no order. Without the enforcement of law, there is no justice," said Hurst, whom Donald Trump nominated to the post in 2017.

Hurst suggested more raids may be coming, and said that employers who hire undocumented immigrants should watch out.

"For those who take advantage of illegal aliens, to those who use illegal aliens for competitive advantage or to make a quick buck, we have something to say to you. If we find that you have violated federal criminal law, we're coming after you," Hurst said.

Chandler called Hurst out for what he called "racist language."

"When you use the term 'illegal alien,' that is no different than using the n-word," Chandler told the Jackson Free Press.

PECO Foods, which runs the poultry plants ICE raided in Bay Springs, Canton and Sebastopol, released a statement saying that the company is "fully cooperating with the authorities in their investigation and are navigating a potential disruption of operations."

The company also denied violating immigration laws. "We adhere strongly to all local, state and federal laws including utilizing the government based E-Verify program which screens new hires through the Social Security Administration as well as the Department of Homeland Security for compliance." The company added that it is experiencing "work stoppages," but is "actively taking appropriate measures to best serve our team members' and customers' needs."

On Tuesday afternoon, Cliff Johnson, the director of the MacArthur Justice Center at the University of Mississippi School of Law, told the Jackson Free Press that the raids were "mean-spirited political grandstanding," carried out in service to the Trump administration, even as Hurst insisted today that the operation wasn't about Trump.

Mississippians do not want this, he said.

"We have a situation where nobody in Mississippi who I know is crying out for hundreds of out-of-state agents to invade Mississippi and haul off our hardworking neighbors and friends in zip ties and buses," he said.

Johnson said he believes that even most Mississippians who support Trump's immigration ideas on a national level are not calling for these roundups.

"We live in these small communities. We know these folks. They coach baseball and Little League and soccer and they work in local businesses," Johnson said. "We live side-by-side with them and we know them and we work with them and they are our friends. On the microlevel, these are our neighbors. And we don't want anybody to be mean to them. And the same people that feel that affinity on them might be yelling, 'Build the Wall.' But they're not yelling for anybody to, 'Come lock up my neighbor.'"

The raids come less than a week after a white man in El Paso opened fire in a Walmart there, just minutes after posting online that he planned to commit a massacre in response to an alleged "Hispanic invasion." That echoed words Trump has repeatedly used in speeches and in thousands of campaign ads on social media over the past year, in which he referred to the influx of refugees and asylum seekers fleeing violence and oppression in Central America as an "invasion."

Trump traveled to El Paso Wednesday afternoon, where he planned to call for unity—even as he uses Twitter to attack El Paso leaders like former Congressman Beto O'Rourke, a Democratic presidential candidate.

Johnson said he does not think those who carried out the ICE raid even stopped to consider the ramifications of executing such a raid less than a week after the El Paso massacre, which left 22 people dead.

"My sense is that there exists a group of people who are so committed to the positions espoused and articulated by Donald Trump that they have little or no capacity to consider the practicalities of the temporal relationship between this act and actions elsewhere and the practical implications of these actions on children. There are people so committed to the Trump agenda that they can rationalize any action in furtherance thereof," Johnson said.

What About the Children?

Johnson is concerned about children, who may have not anyone to go home to.

"I've been getting calls, and I've been hearing stories about children who went to their first day of school today and whose parents were hauled off, and how the government did not make accommodations for those situations," Johnson said.

He said federal officials are telling schools to bring children back to school if they arrive home and their parents are not there. He is concerned about what will happen to children who have no legal parents or guardians.

"No one has told me this, but you think about it, it is not too far-fetched to think that if the government determines that the parents of these kids are undocumented that it is very possible that these children will either be detained themselves or taken into the custody of the state," he said.

Johnson said he does not think it is an accident that the raids came the day after Mississippi's hotly contested party primaries in statewide and legislative races.

"It happens by chance the day after the primaries? I don't think that's an accident," he said, adding that he worked for the U.S. Department of Justice for six years as an assistant attorney. "People can speculate as to which candidates that would favor and which candidates might have been more impacted by a move like this prior to an election. I know first-hand that there's nothing accidental about anything that happened today."

Johnson said he was not claiming that any candidates in the state had conspired with Hurst or federal officials to plan the raids.

"Please don't hear me saying that I think somebody got to Mike Hurst or that Mike Hurst is trying to help somebody get elected," he said. "I'm just saying there is nothing about this or the timing that was accidental."

Mass immigrant worksite roundups are not unheard of in Mississippi, Chandler told the Jackson Free Press on Wednesday. In August 2008, ICE raided Howard Industries in Ellisville, Miss., and arrested about 600 immigrant workers, and most were deported.

In 2009, Howard Industries executive Jose Humberto Gonzalez pleaded guilty to conspiracy charges for hiring undocumented immigrants. A court sentenced him to six months of house arrest and a $2.5 million fine.

"The only Latino administrative person in that company was the one that was charged with recruiting these workers. ... They raided that plant and it was in many instances very violent when they went inside the plant," Chandler said.

The Howard raid was the largest single-day worksite raid in U.S. history at the time it happened, though today's raid eclipsed it.

"The City of Jackson is firmly committed to promoting and securing safe communities. We unflinchingly uphold the canon of human rights for human beings," he said. "The ICE raids are both dehumanizing and ineffective as a tactic for protecting citizens from potential harm. These raids will only further alienate communities from law enforcement, disrupt community policing efforts, and cause law enforcement to forfeit credibility and trust among the people they are sworn to protect and serve.

"I'm calling upon faith institutions in our community to become sanctuaries for our immigrant neighbors and protect them from potential harm. The City of Jackson strongly objects to the Trump administration's ICE raids."

Despite Wednesday's ICE raids, Mississippi has one of the smallest populations of undocumented immigrants in the country, totaling about 20,000, the Pew Research Center reported in 2016.