After ICE Raids, Some Kids Reunited with Parents or Relatives in Mississippi 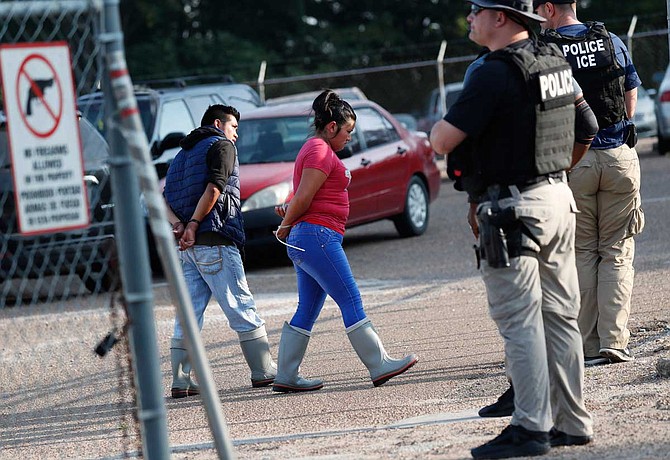 Two people are taken into custody at a Koch Foods Inc. plant in Morton, Miss., on Wednesday, Aug. 7, 2019. U.S. immigration officials raided several Mississippi food processing plants on Wednesday and signaled that the early-morning strikes were part of a large-scale operation targeting owners as well as employees. Photo by Rogelio V. Solis via AP

Scott County Youth Court Prosecutor Constance Slaughter-Harvey watched Thursday morning as a few children reunited with and embraced parents whom, just a day before, they had been separated from after U.S. federal ICE agents arrested them.

"Some of them knew nothing about where their parents were. When their parents were reunited with them, they ran up and started hugging and crying, and it touched my heart," Slaughter-Harvey, a long time civil-rights attorney raised in Forest, Miss., told the Jackson Free Press on Thursday.

Only a handful of children were so lucky to be reunited with their parents, though, Slaughter-Harvey said today. In Scott County, the site of one of the chicken plants that a coalition of ICE, the U.S. Department of Justice and U.S. Attorney Mike Hurst raided Wednesday, she spent last night helping to place about 30 children whose parents had been taken away. She had to look for relatives who could care for the children with no warning after the sudden raids that resulted in ICE agents from around the U.S. coming to Mississippi to arrest almost 700 people on unspecified charges.

Hurst said in his press conference Wednesday that the coalition was arresting immigrants suspected of either criminal felonies or for being in the country illegally, but would not specify further.

By evening, and after a huge uproar especially over stranded children around the state with many of the children in school on the first day of the semester, the feds allowed at least some families to be reunited. That was confirmed in a press release at noon today from Hurst and ICE that does not, however, reflect the chaos reported from schools where children were left inside or in parking lots looking for their parents.

Slaughter-Harvey described uncertainty, fear and tears among children and adults. "Those parents were brought back home, some of the mothers," she said. "And don't ask me how they determined who was going to be released because I have no idea."

Today, about noon, the joint press release from ICE and U.S. Attorney Hurst arrived announcing the release of some 300 of those arrested and united with children after the feds "concluded their processing of detained aliens last night and followed their procedures by releasing many on humanitarian grounds," Jere Miles, HSI Special Agent in Charge in New Orleans, and Hurst said in the new release.

"Preliminarily, it appears that approximately 30 detained aliens were released yesterday on humanitarian grounds at the individual sites where they were initially encountered, and another 270 detained aliens were released after being processed by HSI at the National Guard base in Pearl and returned to the place where they were originally encountered," the release stated.

Hurst said yesterday that immigrants detained in the plant raids would be sent to Jena, La., for processing. 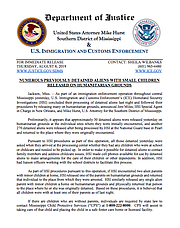 "[A]ll those detained yesterday were asked when they arrived at the processing center whether they had any children who were at school or childcare and needed to be picked up," today's Hurst-ICE release stated.

"In order to make it possible for detained aliens to contact family members and address childcare issues, HSI made cell phones available for use by detained aliens to make arrangements for the care of their children or other dependents. In addition, HSI had liaison officers working with the school districts to facilitate this process."

'Nobody Knew About It'

Sarah Fowler reported in The Clarion-Ledger today that CPS has scrambled in the last 24 hours to find all the children and does not know for sure how many were affected.

This morning, this newspaper reached out to Hurst and his press representative Sheila Wilbanks, who sent his press release Wednesday touting that the workplace immigration raids were the "largest" in U.S. history. We asked the U.S. attorney's office for copies of "specific plans and protocols in place yesterday to take care of the children whose parents were arrested in the raids." As this story goes to press, neither Hurst nor Wilbanks has acknowledged those questions, but instead sent the release as this story was about to go online.

In the release, Hurst and ICE are clearly responding to a groundswell of criticism in the last 24 hours, especially about what seems to have been a lack of planing for the children's welfare and mental health over losing their parents on their first day of school.

The release responds this way: "[If] HSI encountered two alien parents with minor children at home, HSI released one of the parents on humanitarian grounds and returned that individual to the place from which they were arrested. HSI similarly released any single alien parent with minor children at home on humanitarian grounds and physically returned that person to the place where he or she was originally detained. Based on these procedures, it is believed that all children were with at least one of their parents as of last night."

ICE and Hurst also released a phone number publicly for the first time 24 hours after the raids, at least to media, that stranded children, or whomever is helping them, can call: "If there are children who are without parents, individuals are required by state law to contact Mississippi Child Protective Services (“CPS”) at 1-800-222-8000. CPS will assist in taking care of that child and placing the child in a safe foster care home or licensed facility."

Hurst's office did take time to update its Facebook page yesterday with multiple images of national media covering the U.S. attorney leading the press conference yesterday announcing that "we are coming after" both "illegal aliens" and businesses who employ them. We also had reports from white Mississippians saying that they received invitations yesterday to "like" Hurst's U.S. attorney page on Facebook.

PECO Foods, which runs the poultry plants ICE raided in Bay Springs in Jasper County, Canton in Madison County and Sebastopol in Scott County, released a statement saying that the company is "fully cooperating with the authorities in their investigation and are navigating a potential disruption of operations."

The company also denied violating immigration laws. "We adhere strongly to all local, state and federal laws including utilizing the government based E-Verify program which screens new hires through the Social Security Administration as well as the Department of Homeland Security for compliance," PECO said in the statement.

The company added that it is experiencing "work stoppages," but is "actively taking appropriate measures to best serve our team members' and customers' needs."

The Jackson Free Press also asked Hurst's office today to provide a list of business owners and managers arrested in the raids, if any, but we have not yet received a response. At his press conference yesterday, Hurst pointedly threatened those supposedly hiring undocumented immigrants: "For those who take advantage of illegal aliens, to those who use illegal aliens for competitive advantage or to make a quick buck, we have something to say to you. If we find that you have violated federal criminal law, we're coming after you," Hurst warned.

In Scott County today, Slaughter-Harvey said, all children are now with relatives.

"We protect children. And those children have been placed with relatives," she said. "This community, they're very close-knit, and if you find one relative, you're going to find more than one. No children left on their own. All the children who were released had relatives to come and get them."

The NAACP and the ACLU are holding a joint press conference today at 2 p.m. at the NAACP headquarters on John R. Lynch Street in Jackson. Watch for further updates this afternoon.