Late today, Congressman Bennie Thompson and two other U.S. representatives sent an eight-page letter and attachments to U.S. Attorney General William Barr and Acting Homeland Security Secretary Kevin McAleenan demanding answers on why many Mississippi children were "separated from their parents and terrified because they did not know where their parents were taken and detained" in multiple Immigration and Custom Enforcement raids across the state Wednesday.

"Volunteers reportedly took in sobbing children at churches and schools to provide them food and comfort," the letter added.

The day after a coalition of ICE, the U.S. Department of Justice and Jackson-based U.S. Attorney Mike Hurst coordinated the raid of seven workplaces and rounded up 680 immigrants, saying they were executing warrants for felonies and to "aliens" in the country illegally, Thompson said "it appears that they will face only immigration proceedings, not criminal charges." 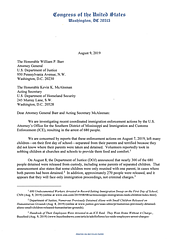 Thompson said he had learned that administration officials had failed to inform either Child Protectives Services in Mississippi or the children's schools before taking their parents. Multiple sources confirmed the chaos and apparent lack of planning and communication by the federal government this week, even as Hurst held a press conference the next day to claim that the government followed established procedures.

"For those who take advantage of illegal aliens, to those who use illegal aliens for competitive advantage or to make a quick buck, we have something to say to you. If we find that you have violated federal criminal law, we're coming after you," Hurst said at the press conference in Jackson.

"From these reports, it is unclear whether any of the owners or managers of these worksites will face charges or penalties in connection with these enforcement actions," Thompson wrote.

The congressman pointed out that Koch Foods, owner of three facilities raided, does not appear to have faced any immigration-related charges, —although Hurst had pointedly threatened businesses who hire undocumented workers Wednesday.

Thompson added that Koch Foods had paid $3.75 million in a 2018 legal settlement over an Equal Employment Opportunity Commission lawsuit on behalf of Hispanic workers who had accused the company of race, sex and nationality-based discrimination. He pointed to similar instances, such as in Ohio in 2018.

"It appears that these DOJ and ICE enforcement actions are targeting only immigrant workers and not their employers," Thompson said, pushing back on Hurst's assertion in Mississippi on Wednesday. "We are alarmed by the potential serious chilling effect off these enforcement actions close in time to these workers vindicating their rights to a safe working environment."

Thompson then demands that Barr provide multiple documents by Aug. 23, 2019, including the costs of the Aug. 7 enforcement actions, which apparently drew hundreds of ICE agents from around the country to Mississippi. He wants to know specifics of who was detained and arrested, including minors, the number criminally charged and how many were U.S. citizens.

In addition, the congressman demands to know specifics of family separations that resulted and how long parents were separated from children. He wants details of all criminal charges, if any, that resulted from the raids, as well as any fines against the companies who employed the people detained.

Read the PDF of the letter and attachments here.

Donna Ladd is the editor-in-chief of the Jackson Free Press. Email her at [email protected] and follow her on Twitter at @donnerkay. Read the JFP's full team coverage of the Mississippi raids at jacksonfreepress.com/immigration.