Refugees Locked Up In Mississippi: ‘Where Are the Family Values?’ | Jackson Free Press | Jackson, MS

Refugees Locked Up In Mississippi: ‘Where Are the Family Values?’ 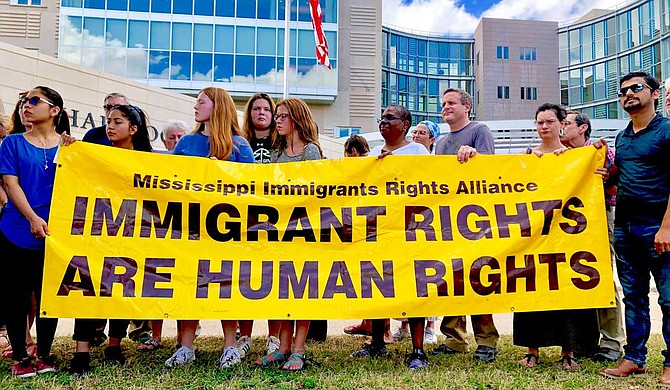 Immigrants’ rights activists protest against the Trump administration’s decision to open detention facilities in Mississippi outside the U.S. District Court building in Jackson on July 12, 2019. Photo by Ashton Pittman

A throng of inmates broke through the gates at the Adams County Correctional Center in Natchez, Miss., determined to speak to the warden about conditions there. Men shouted loudly in Spanish. Guards responded by deploying tear gas from the roof.

In the midst of all the commotion, a Mississippi television station took a phone call.

"They always beat us and hit us. We just pay them back," the inmate told WAPT. "We're trying to get better food, medical programs, clothes, and we're trying to get some respect from the officers and lieutenants."

Carithers' family detailed the events of that day in a 2014 lawsuit,accusing the Corrections Corporation of America, now known as CoreCivic, of "creating a dangerous atmosphere for the correction officers by depriving inmates of basic needs and treating them inhumanely." A judge ultimately dismissed that lawsuit in 2016, claiming there was no basis for it. CoreCivic still oversees operations at Adams County Correctional Center.

Under the Trump administration, CoreCivic has a new mission at the prison: to house asylum seekers who are in the custody of the U.S. Immigration Customs Enforcement agency, also known as ICE.

Back when inmates rioted at the facility in 2012, it primarily held undocumented immigrants who had committed felonies and were awaiting deportation—not asylum seekers.

The ramp-up in felony immigrant detentions began in 1996, Mississippi Immigrants Rights Alliance President Bill Chandler told the Jackson Free Press on July 26. That year, a Republican Congress passed and Democratic President Bill Clinton signed a law that made it a criminal felony for undocumented people to re-enter the U.S. after the government had already deported them once. Illegal re-entry was a misdemeanor before.

"It was a civil action, but now they've made it a crime to be a human being who wants to flee violence in their country of origin," Chandler said.

When the 2012 riot broke out, the overwhelming majority of inmates were there for illegal re-entry felonies, not violent crimes, Chandler said, adding that the inmates had legitimate, unaddressed grievances. CoreCivic provided minimal food that was not "culturally appropriate" to the inmates, he said. Even worse, people died due to a lack of proper care, with no full-time doctors or registered nurses on staff. MIRA spoke to detainees who suffered from epilepsy, but did not get proper care.

The Obama administration made plans to end the federal government's use of private prisons in 2016 after a government audit found a higher rate of security and safety issues in private facilities than government-run ones.

In May, the U.S. Justice Department announced that it would end its contract with CoreCivic in Natchez. Immigrants whom the Federal Bureau of Prisons had held in Adams County for felony illegal re-entry are now being "farmed out" to other private facilities across the country, Chandler said. That was not the end of the story for the facility, though.

In June, ICE stepped in and signed a contract with Core Civic to begin using the Adams County Correctional Facility to house undocumented asylum-seekers who came to the border legally—you must be in the U.S. to request asylum—but who are now in ICE custody due to Trump's hardened approach to the border.

"You have to understand that at the border there are thousands of people who want to apply for asylum, and they are sitting on the other side of the border in Mexico," Chandler said at a protest in Jackson on July 12.   "And we only have a trickle of that group that is coming to the United States every day that have been approved for asylum hearings."

ICE moved one of those refugees, Cuban asylum seeker Yoel Alonso, from a Louisiana detention center to the Mississippi facility in Adams County in early July. He is now wheelchair bound because of a gout condition that has worsened during months in ICE custody. His wife, Midalis Rodriguez, lives in Miami.

In posts on her personal Facebook page in June, Rodriguez wrote in Spanish that the Louisiana center was "a cemetery for Cuban immigrants." After ICE moved her husband to the Adams County prison, she told one national media outlet that things had gotten even worse.

"It's a shame to say it, but Yoel left a dictatorship and entered a new one," she told Mother Jones magazine in July.

The Trump administration has rounded up hundreds of thousands of immigrants over the past year, placing them in crowded camps, often with poor care. ICE has entire private-run camps filled with thousands of children whom the government separated from their parents, and some have been there for months, with many confined to cages.

In Jackson, MIRA's leaders and supporters travel every day to the Greyhound bus station throughout the week to greet recently released ICE detainees with food, water, medical care and other necessities, such as diapers. Those immigrants come from facilities in Texas, like the one in El Paso, and managed to procure a bus ticket through a sponsor, which might be a church organization, friend or family member elsewhere in the U.S.

As they travel to meet with their sponsors while awaiting court decisions on their immigration or asylum status, the immigrants have to wear ICE monitoring bracelets on their ankles. They can go days without eating because, unlike the Jackson one, Greyhound stations in other cities often forbid MIRA's counterparts from offering aid. The City of Jackson owns the Greyhound station where MIRA helps refugees.

"None of the people we've encountered since we began this project at the end of (last) October, with one exception, even speaks English," Chandler said. "So we have to interpret for them. Most have no idea where they are when they get off the bus in Jackson. They've never heard of Jackson. They've never heard of Mississippi. And they're here on the way to connect with their family, or friends or church organization in various cities across the country."

'The Guys Is a First-Class Racist'

Chandler told the Jackson Free Press that this treatment of non-white refugees did not begin with Trump.

"The guy is a first-class racist, but many of his ideas come from people like Phil Bryant, who preceded Trump in his xenophobia and racism," Chandler said of Mississippi's governor. Bryant has recently gone to the Mexican border to express support for Trump's policies.

Chandler pointed back to 2014, when a wave of undocumented and unaccompanied South American children first appeared at the border, fleeing violence and war in their homelands. Bryant vowed to block all efforts to house them in Mississippi, and sternly rebuked then-President Barack Obama in a letter.

"Illegal aliens—many unaccompanied children—are flooding into our country in record numbers. ... I am also writing to inform you that, to the extent permitted by law, I intend to prohibit the federal government or its agents from housing large numbers of new illegal immigrants in the State of Mississippi," Bryant wrote in the July 2014 letter—11 months before Trump would launch a longshot bid for the presidency.

In 2015, after the U.S. announced that it would take in 10,000 Syrian families and children who were fleeing war in their home country, where their own government was gassing tens of thousands of its own citizens, Bryant again spoke against accepting refugees.

"I will do everything humanly possible to stop any plans from the Obama Administration to put Syrian refugees in Mississippi," the governor wrote in a November 2015 Facebook post, but the governor does not have any actual powers to stop federally accepted refugees from entering the state.

'I Came With My Family'

ICE first began housing asylum seekers in Mississippi at the state's Tallahatchie Correctional Facility in Tutwiler, in the Delta, sometime last year. Until then, the facility, which is also run by CoreCivic, held 1,300 criminals from California. But when California ended its contract as part of an effort to phase out the state's use of private prisons, CoreCivic sought a new contract—and found it with ICE.  Quietly, the contractor and the agency signed an agreement last June to house up to 1,350 detained refugees there.

In addition, ICE has also opened several facilities in Louisiana. In May, the Southern Poverty Law Center filed a lawsuit alleging that the rate of parole approval for asylum seekers within the jurisdiction of the New Orleans ICE field office dropped from 76% in 2016 to only 1.5% in 2018. The New Orleans office covers Louisiana, Arkansas, Mississippi and Tennessee.

In 2016, ICE held just 2,000 immigrants between Mississippi and Louisiana. Since Trump came into office, that number has swelled past 10,000.

At the July 12 protest, Brenda Chambliss, a MIRA attorney, criticized "family values" politicians for standing by or supporting Trump's policies.

"Where are the family values that everyone is speaking of? Where is the humanity? Where are these children? These questions need to be asked over and over again because we're not getting answers. No one is being held to the standards and the values that they claim to have. I am really, really concerned with these children. We have private entities that are holding them in concentration camps—and that is exactly what they are being held in," she said.

"We should be horrified by this as a country. We claim to be the example for the world; I don't see that. And the behavior and the manner in which we're dealing with this situation, there is no humanity. There is no accountability."