Undocumented and Caught in the System 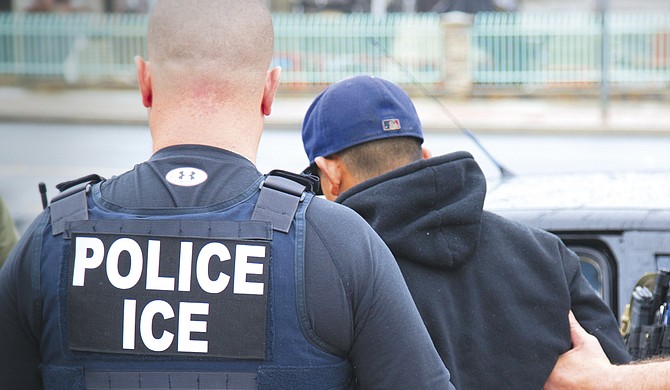 Immigration authorities in Louisiana and Mississippi have filed nearly 3,000 deportation proceedings in the first three months in 2018, data from Syracuse University show. Photo by AP/File Photo

Immigration enforcement officials deported Yesica Paola Rojas-Baten, a 19-year-old Guatemalan woman, in December 2017 when she was flown from Texas to Guatemala. A month later, she was inside an SUV traveling through Hancock County, Miss. When sheriffs pulled over the SUV she was in and another SUV traveling with it, they found 18 total passengers who were all undocumented immigrants, a press release from the U.S. attorney Mike Hurst's office says.

U.S. Border Patrol agents took the passengers to the border-patrol station, and Rojas-Baten was charged in federal court for illegal re-entry. After pleading guilty, she faces up to two years in federal prison and a $250,000 fine, and a judge will sentence her in August.

The 19-year-old could face the other side of immigration prosecution through the federal court system, one that has caused outcry and concern due to the Federal Bureau of Prisons' use of private prisons.

Traditionally, the bureau houses undocumented immigrants charged with federal crimes in "criminal alien requirement" facilities. Private prison corporations run the BOP's 11 contract prisons. "The majority of BOP inmates in private prisons are sentenced criminal aliens who may be deported upon completion of their sentence," the Bureau of Prisons website states.

BOP released a report about its private contract prisons in 2016, which revealed the dangerous conditions inside these facilities. One of the private contract prisons, Adams County Correctional Center, is in Natchez, Miss. A correctional officer died there in 2012 when inmates rioted over poor conditions, including inadequate food and medical care.

The Corrections Corporation of America, which runs two of the BOP's 11 contract prisons, ran the Adams County facility at the time. The corporation has since changed its name to CoreCivic but did not lose its contract to operate the Natchez facility. In fact, when Donald Trump became president, CCA and the GEO Group, which runs seven of the 11 federal contract prisons, both saw significant bumps in their stock-market value, Forbes reported.

As of December 2015, more than 22,000 inmates, mainly undocumented immigrants, are housed in the Bureau of Prison's private facilities.

The path to incarceration for undocumented people living in the U.S. largely depends on whether Immigration and Customs Enforcement agents send them into the immigration courts system or if federal prosecutors charge them with a federal crime. In Rojas-Baten's case, Hurst's office coordinated with ICE officials to charge her with the federal crime of illegal re-entry.

When ICE agents pick up an undocumented person for the first time, they have several options and discretion to detain a person or not. If ICE agents choose to detain an undocumented immigrant, they are sent to an immigration detention facility. When agents arrest someone in Mississippi and want to detain them, they send them across state lines to Louisiana to Jena or Pine Prairie. There are two immigration courts in Louisiana: one in New Orleans and one in Oakdale.

When Trump became president, he promised a crackdown on undocumented immigrants—not just those who commit federal crimes but anyone who in the country illegally. The White House's strongest focus has been the border. A press release from the White House claims that the number of illegal border crossings has more than tripled in the past year.

"April 2018 was also the second month in a row that saw more than 37,000 individuals apprehended after entering the country illegally along our Southwest border. The need to enforce our laws, secure our border, and close our immigration loopholes has been further underscored by the recent arrival of a 'caravan' of individuals seeking to enter the United States," a White House press release says.

In order for those coming to America to seek asylum, they must come to the border with or without documents to ask for it, however. Mississippi National Guard sent 25 soldiers to the southwest Mexico border last week as a part of "Operation Guardian Support," the latest border security operation from ICE.

"Efforts to remove aliens once they illegally cross our border are hampered by glaring flaws in current statutory law and activist judicial constraints," a White House release says. "As a result, many aliens are apprehended and temporarily detained after illegally entering, only to be quickly released into the interior of the United States."

Data tell a different story, however. Despite the judicial backlog in immigration cases, ICE agents have filed nearly 3,000 deportation proceedings in immigration court for people picked up in Mississippi and Louisiana through March of 2018, Syracuse University TRAC data show.

If this rate continues, 2018 is likely to post the highest number of deportation proceedings filed by ICE in the two states than in recent years.

The majority of these cases are coded as "entry without inspection" or "other immigration charge," meaning the majority of deportation proceedings that ICE agents file in Louisiana and Mississippi are not for undocumented immigrants who have committed violent crimes.

Rather, despite increasing rhetoric about dangerous immigrants and transnational gangs, the majority of undocumented immigrants waiting for deportation committed the crime of being here illegally.

'This is My Only Chance'

Immigration attorney Amelia McGowan has worked with undocumented immigrants, who are detained in Jena or Pine Prairie in Louisiana, and sees little difference between those facilities and other prisons. She recalled seeing pregnant mothers with chains around their bellies and said everyone has to wear "scrubs" just like jumpsuits in federal or state prison.

Undocumented immigrants going through deportation proceedings could wait for months to see a judge, whereas someone like Rojas-Baten saw a judge quickly in the federal system. If she is sentenced for prison time, she will have to sit behind bars for two years. McGowan said a person charged with "criminal re-entry" will likely not get to see an immigration judge because they will have an active order for removal, meaning after serving their sentence, they will likely be deported immediately.

McGowan is working with some immigrants who are fleeing terrible conditions in their home countries and would rather be in prison than return to dangerous countries where they live.

"I did meet with people in Jena who had re-entered during the Obama administration. Most of them got caught again, and they would say, 'This is my only chance to live,'" she told the Jackson Free Press.

Many undocumented immigrants do not have access to legal assistance or attorneys. McGowan said people like Rojas-Baten, who have illegally re-entered the country, can ask a judge to not deport them if they fear for their lives.

"When you re-enter, you are allowed to seek withholding of removal if you can show you would be persecuted," McGowan said. "... You do have the possibility of appealing."