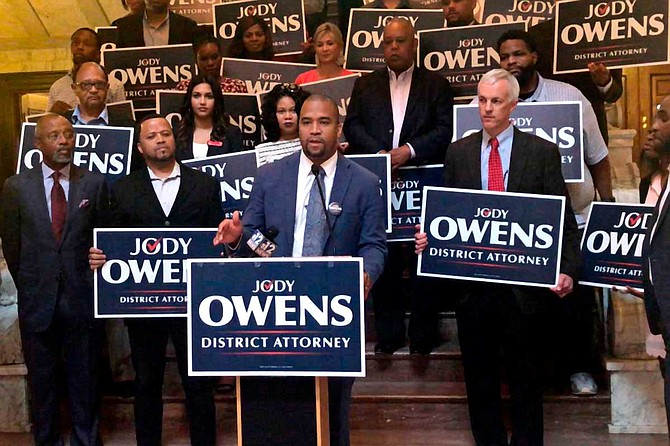 Jody Owens has "demonstrated a commitment" to making Jackson better, Mayor Chokwe A. Lumumba said during a live WMPR 90.1 radio broadcast of Coffee and Conversations with Wanda Evers on Wednesday, endorsing him in the race for Hinds County district attorney.

Owens, a Democrat who announced his bid for the office earlier this year, was the managing attorney at the Mississippi branch of the Southern Poverty Law Center, or SPLC, which focuses on civil-rights litigation. He stepped down from his position on June 28 to focus on his campaign.

"I am grateful to my friend Jody Owens for his work, and when you talk about the leadership that we elect, we don't need to do it based on just being friends, but we need to know the history of a person," Lumumba said. "Jody has worked for the SPLC. He has led it several years. So this isn't a person who just arrived today and is telling you a good story. He's demonstrated a commitment. And for that, I have endorsed him. I am endorsing him."

'To Build a Better Jackson'

During his tenure at the SPLC over the past decade, Owens' work has focused on fighting mass incarceration, the "school-to-prison pipeline" that heavily targeted African American youth and on reforming criminal justice in Mississippi, including efforts to end the state's reliance on private prisons.

Under his watch in 2013, the SPLC joined the American Civil Liberties Unionto sue the state for its treatment of prisoners at the East Mississippi Correctional Facility, citing rats crawling out of toilets, cells without lights, a lack of health care and mental-health care, and other alleged squalor conditions.

In a campaign email announcing the endorsement on Wednesday, Owens said he was glad to have Lumumba's support.

The email echoed some of Lumumba's comments from the earlier radio broadcast.

"I thank you for your lead in to our conversation about just having an understanding of where we are and how we get to a better place," Lumumba said in the broadcast. "It really will take shared sacrifice. It will require not only as the mayor of the city that I commit and dedicate myself each day to improving the condition of Jackson, but it requires the collective genius of all of our citizens. It requires that we work together and we row together in order to change the city, and I think that we're well on our way to doing that."

'I've Been a System Changer'

In late June, Owens accepted a slew of endorsements from state and city leaders. Standing in the Mississippi Capitol rotunda, he made the case for his candidacy.

"In this capitol, laws are made every year that impact all of Mississippi citizens," he said at the press conference. "I'm the only candidate for the last decade that has worked tirelessly with the Legislature to develop new laws because a prosecutor can only do what the law allows him or her to do."

His Democratic primary opponents are Darla Palmer and Stanley Alexander. He said their respective work as a defense attorney and as a prosecutor did not focus enough on changing the system.

"What makes me unique is that I understand the totality of the system because I've been a system changer, particularly the juvenile system in Mississippi," he said.

"I'm the most qualified candidate because of my 18 years of experience as a prosecutor," he told the Jackson Free Press in June. "I know the best ways to enhance and improve the system."

Palmer did not respond to a request for comment by press time.

Owens is running on what he calls the SMART justice platform. He wants to implement a re-entry program for ex-offenders to find jobs and pursue their education; use mental-health and rehabilitation programs to help those with addictions get treatment; provide support to victims and their families to help rebuild families and communities affected by violence; and collaborate with clergy and community organizations to establish interventions that are effective in reducing crime in prisons and courts.

"For me and the people who believe in a fair and just system, it's realizing that you stop crime by making sure people are not going into this repeated cycle," Owens told the Jackson Free Press in June.

Robert Schuler Smith, the current district attorney, is running for the Democratic nomination for governor, though he faces an uphill battle in that race, in which Attorney General Jim Hood is the frontrunner. Recently, a court found Smith not guilty of robbery charges related to a 2015 altercation with Christie Edwards, an ex-girlfriend. The jury could not reach a decision on aggravated stalking charges against him.

Owens, Alexander and Palmer face off in the Aug. 6 Democratic Party primary. Democratic and Republican candidates in other races face off that day, too, including candidates in the races for governor, attorney general, State House and Senate seats, and more. If no candidate in any of those races wins 50% or more among primary voters, the top two vote-getters go head-to-head in an Aug. 27 runoff. The general election is Nov. 5.

CORRECTION: In the original version of this story, we said Jody Owens is currently the managing attorney at the Mississippi branch of the Southern Poverty Law Center. He actually stepped down from the position on June 28.