Under Reeves, Mississippi Now the Last State With No Equal-Pay Law 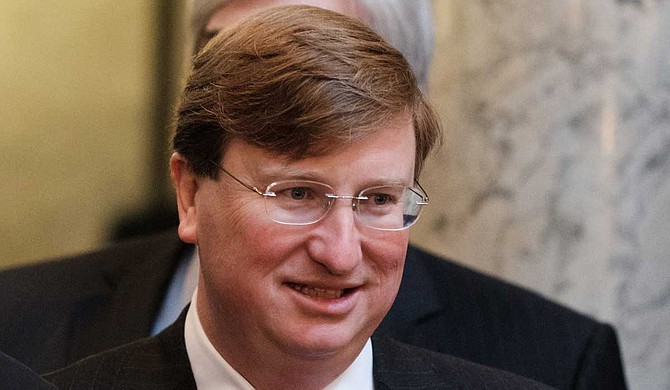 Under Mississippi Lt. Gov. Tate Reeves, numerous equal-pay laws have died in recent years, including three in the Mississippi Senate in 2019. Photo by Ashton Pittman

As a 3- and 4-year-old child, Cassandra Welchlin would get up early in the morning and walk with her mother to work, waving at the neighbors as they headed toward the Woolfolk State Office Building in downtown Jackson. Once there, her mother would sneak her inside and hide her in a tiny maid's closet, where a colleague would play with her while her mother cleaned toilets, mopped the floors and changed the trash.

"That was my child-care situation, all the time. That is what would happen because she did not have access to higher wages so she could take me to child care," the grown-up Welchlin, who is now a lobbyist for the Child Care Matters Campaign at the Mississippi Low Income Child Care Initiative, told the "Let's Talk Jackson" podcast earlier this summer.

The smell of old mops and Lysol, or even the rustling of paper towels, she said, still brings back memories of her time in a maid's closet.

Across the street from the Woolfolk building, three bills that would have guaranteed the state's women equal pay for equal work, a cause Welchlin has fought for as a lobbyist and as a candidate for the Legislature, died in the Mississippi Senate.

Mississippi Lt. Gov. Tate Reeves, a candidate in tomorrow's Republican primary runoff for governor, serves as the president of the Mississippi Senate, where he has significant power over which bills legislators even get a chance to vote on. He can appoint chairs of powerful committees and choose which bills go to which committees. Committee chairs can stop legislation dead in its tracks, as happened in each committee where an equal-pay bill appeared this year.

In May, Mississippi became the only state without an equal-pay law after Alabama Gov. Kay Ivey signed one in her state. Equal pay, said Welchlin, who is African American, could help mothers like hers afford child care.

"Over the last three years, we've been pushing legislation that would get an equal-pay law in the state of Mississippi, because Mississippi is the only state now as of May that does not have equal-pay legislation," Welchlin said.

All three equal-pay bills introduced this year, including the one Welchlin supported, the Evelyn Gandy Fair Pay, or Senate Bill 2910, died in committee on Feb. 5 this year. Equal-pay bills also died in the Senate in 2018, 2017, and in other prior years as well.

Reeves' campaign did not respond to a request for comment.

Earlier this month, Reeves' opponent in tomorrow's runoff, former Mississippi Supreme Court Chief Justice Bill Waller, told the Jackson Free Press he supports an equal-pay law, but not after some confusion at first.

In Hattiesburg, Miss., earlier this month, Jackson Free Press reporter Ashton Pittman asked Waller if he supports the Evelyn Gandy Fair Pay Act, named after Mississippi's first female statewide elected official and first female lieutenant governor—a woman who fought to get the male-dominated Legislature to finally ratify the 19th Amendment when she held that office in the 1970s.

"I'm in favor of equal pay for every member of society. And I think that's the point. But we need to be careful about not putting artificial barriers, incentives or floors on jobs," Waller told the Jackson Free Press on Aug. 13. "We need to make sure that the marketplaces are open for everybody who needs to work, and we need to make sure that those systems are in place to promote people on work at the job."

His team did not allow time for a follow-up, as he had to be in Jackson in about an hour and a half.

Once in Jackson, though, Jackson Free Press reporter Aliyah Veal followed up, asking again about Waller's views on equal pay. Veal pointed out Mississippi's status as the only state without an equal-pay law in her question to Waller. This time, he answered more clearly.

"Absolutely. Mississippi needs to adopt that, and that was killed in the Senate, by the way," he said.

During a Republican primary debate in July, Reeves said he has treated women fairly as a public-office holder and would hire women for top jobs in his administration.

"My deputy state treasurer was a female," he said.

"If you voted in the Republican primary, you cannot vote in the Democratic (runoff) primary ... and vice versa," Hinds County Republican Party Chairman Pete Perry told the Jackson Free Press on Aug. 7. "If you did not vote, you can vote in whatever primary."

After voters decide, the GOP nominee will face Attorney General Jim Hood on Nov. 5. Current Mississippi Treasurer Lynn Fitch and Madison attorney Andy Taggart also go head to head in a runoff in the GOP race for attorney general on Aug 7, as well as runoffs in a number of Jackson-area legislative and Hinds County races.

When Cassandra Welchlin spoke to "Let's Talk Jackson," she was a Democratic primary candidate for Mississippi House District 68. She lost that primary to American Civil Liberties Union Mississippi Director of Communications Zakiya Summers on Aug. 6.