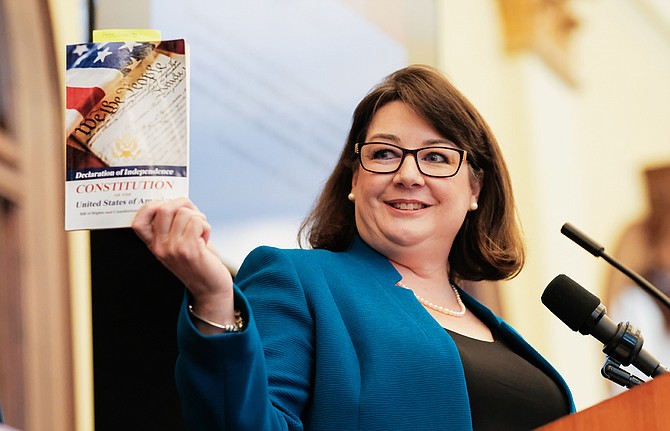 Jennifer Ingram Johnson, the president-elect of the Mississippi Bar Association, holds up a copy of the Constitution while she talks about the importance of the 19th Amendment in front of a crowd of hundreds at the League of Women Voters' 19th Amendment Celebration Luncheon in Hattiesburg on June 11, 2019. Photo by Ashton Pittman.

HATTIESBURG, Miss.—The first thing Jennifer Ingram Johnson wanted to do after she registered to vote in the early 1990s was visit Evelyn Gandy at her law office in Hattiesburg. When the young, newly registered voter arrived to share the news, Gandy, a former Mississippi lieutenant governor, called a coffee break.

"Everybody in the office celebrated that we have another voter—and another woman voter," Johnson, who is now the president-elect of the Mississippi Bar Association, told an audience in Gandy's hometown on Tuesday.

Johnson, who counts Gandy as a mentor, was the featured speaker at a League of Women Voters luncheon meant to commemorate the 100-year anniversary of the 19th Amendment, which granted women the right to vote. The League honored Gandy for her historic achievements.

"For her to be honored and remembered in celebration of the 19th Amendment is so fitting, and I am so honored to have the opportunity to share with you all about her on this very, very special occasion," Johnson said, urging those women gathered to use their right to vote.

Arrangements with purple, white and gold flowers—symbols early-20th-century suffragists used to symbolize, respectively, loyalty, purity and life—sat on each table in the room.

'A Giant in the History of Mississippi Politics'

Johnson described Gandy as a towering figure among Mississippi women, and whose career included many firsts. As the only woman in her law school class, she became the first woman elected as student body president at the University of Mississippi School of Law and then was the first woman to serve as editor of the Mississippi Law Review. 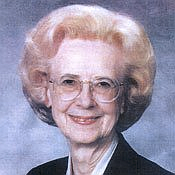 After Gandy finished school, Forrest County voters elected her as the first woman to serve in the State House of Representatives from her district in 1947. She went on to become the first woman in Mississippi elected to any statewide office, serving as state treasurer and state insurance commissioner. In 1975, voters made her the state's first female lieutenant governor.

"There's not one female attorney anywhere who has influenced more women to go into law school and to practice law, and I am so honored to be one of those women," Johnson told the crowd.

When Johnson was in ninth grade, though, she flipped through her Mississippi History textbook and found just one five-sentence paragraph about Gandy.

"What a shame," Johnson said. "Because Evelyn Gandy is a giant in the history of Mississippi politics and Mississippi women."

Twice, Gandy attempted to crack Mississippi's highest glass ceiling but lost bids for the Democratic nomination for governor in 1979 and again in 1983. At her funeral in 2007, she made one more first when she became the first woman to lie in state at the Mississippi State Capitol Rotunda, with her body lying in a place of public honor. At her funeral, Gov. William Winter, who beat her in the 1979 governor's race, praised her as one of Mississippi's "most able leaders"—and said she would have beaten him if she had been a man.

But Johnson, who refers to her mentor as "Governor Gandy," told the Jackson Free Press after the speech on Tuesday that she never heard her complain about sexist double standards, either from the press or from voters.

"One of the things that I do recall her saying is that she had a belief in other people and that she would be treated fairly. And she lived her life in that belief ... I have never heard her say anything disparaging about her opportunities or any of her experiences because she saw everything as an opportunity to move women forward," Johnson said.

"So even in the times when she had to work a little bit harder than some of the men may have, I think she really enjoyed that and recognized that it was necessary to move women forward, and she just took on the challenge with great grace."

Like other elected Democrats in the state back then, early in her career Gandy ran on a nominally pro-segregationist platform, though without emphasizing it the way many of her male contemporaries did. Over time, Gandy's views evolved, and later in her political career, she apologized for her past positions on integration and embraced equal rights in her platform.

"She did have a change over time just as we all grow and have different ideas about things based on our experiences and based on what's the right thing to do," Johnson told the Jackson Free Press, noting that Gandy did quietly implement the Civil Rights Act of 1964 at the State Office of Public Welfare (now the Department of Human Services), which she headed in the mid-1960s, within a year of its passage.

As part of her job as lieutenant governor, Gandy served as president of the State Senate, which was all-male back then. There, she set the legislative agenda, and a group of senators known as "The Gandy Boys" helped her pass the legislation that she prioritized. Johnson's father, former State Sen. Carroll H. Ingram, was one of those senators, who were also referred to as "Ms. Evelyn's Boys."

By the 1970s, Mississippi still had not ratified the 19th Amendment, which became part of the U.S. Constitution in 1920 after enough states approved it. Though Gandy pushed for Mississippi to join the rest of the country in giving the stamp of approval to women's suffrage, Mississippi did not ratify it until 1984—the year after her second failed run for governor and the end of her political career. Her efforts, though, Johnson said, helped pave the way for its passage in Mississippi.

In 2002, Gandy told the Hattiesburg American that she shares in "the victories and defeats" of other women running for office because she has experienced both.

"We're not trying to be better than men; we're just trying to join them," she said.

'We Do Stand on the Shoulders of So Many Women'

"It said that a woman's work at home, that is not economic in nature, is equal to the work of her husband. ... And for y'all that have done housework, you know that it is equal," Beam said, drawing laughter from the crowd.

"We do stand on the shoulders of so many women," she added.

The League of Women Voters also honored the late Oseola McCarty, a local African American woman who worked for 75 years washing laundry. Throughout her career, she saved most of her earnings and donated much of it to the University of Southern Mississippi to offer scholarships to students. After her story made national news, donations to the Oseola McCarty Scholarship poured in from around the country.

The luncheon kicked off the start of a yearlong celebration for the Mississippi League of Women Voters, commemorating the U.S. Senate's passage of the 19th Amendment. The league has events to celebrate 100 years of suffrage planned all the way through until August 2020. That month will mark 100 years since the point at which enough states ratified the 19th Amendment for it to finally become law.

Retired U.S. Army Colonel Sheila Varnado, who is African American, said the league is working on future programs to "fully discuss" the role of black women in the suffragist movement.

"There are many outstanding heroes in our communities throughout this nation who made it possible for women and men of any race to exercise the right to vote," she said. "When we work together, we can—and we do—accomplish great things."

State Rep. Missy McGee, who, like Gandy, now represents Mississippi in the State Legislature, was scheduled to attend Tuesday's luncheon but could not make it.

First elected to fill a vacancy in 2017, McGee gained attention earlier this year when she became the only Republican in the Legislature to vote against the state's new law that bans abortions after six weeks.

"This was a bill that was pushed through committee last week at the 11th hour on a deadline day. No hearings. No exceptions for rape or incest. No exceptions for if a 100% fatal genetic abnormality is found later in the pregnancy," she wrote in a Facebook post at the time, noting that she was just one of just 15 women in the 122-member body.

During the legislative session, McGee also pushed unsuccessfully for a bill that would have updated state hate crimes laws to include protections for LGBT people.