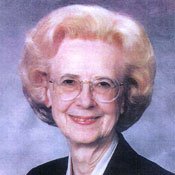 Last week, members of the Women in the Profession Committee of the Mississippi Bar Association unveiled a bronze bust at the state Capitol to honor Evelyn Gandy, who was the first woman to hold several state-wide offices.

Last week, members of the Women in the Profession Committee of the Mississippi Bar Association unveiled a bronze bust at the state Capitol to honor Gandy who was the first woman in Mississippi elected state representative in 1947, state treasurer in 1960, insurance commissioner in 1972 and lieutenant governor in 1976.

The statue is an effort between the Women in the Profession Committee--an organization that assesses the status of women in the legal profession--and Mississippi College professor and artist Dr. Samuel Gore who sculpted the bust after receiving approval from the state Legislature last year.

The statue is located in the Old Supreme Court Chamber on the second floor of the Capitol.

Former Supreme Court Justice and state Sen. Kay Cobb is one of the members of the Women in the Profession Committee who had a personal relationship with Gandy.

"She had a love of the law and a desire to encourage women to enter public service," says Cobb who lives in Oxford. "She gave freely of her time to talk to anymore who had aspirations to do that. Role model and mentor are the words you most often see associated with her.'

Gandy, who grew up in Hattiesburg, was the only woman in her graduating class at the University of Mississippi School of Law in 1943.

During her political career, she supported legislation to increase funding for education and human services. She also co-authored legislation to create the University of Mississippi Medical Center.