Lots of Mouths to Feed 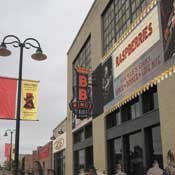 Jackson developer David Watkins is requesting $8 million in urban renewal bonds from the Jackson Redevelopment Authority, a quasi-governmental agency that assists the city with developments.

The JRA board is also considering allocating $27 million in urban renewal bonds to Old Capitol Green developers for a parking garage with adjoining commercial space, and $96 million for a convention center hotel. The board has discussed issuing $3.5 million in urban renewal bonds for a Jackson Visitors and Convention Center welcome center at the corner of Pascagoula and Jefferson Streets.

With so many project mouths to feed, all the requests for public financing present the question: How much risk would the city assume by approving funds for all the projects asking for them? Procedurally, to allocate bonds for any of the projects, both JRA and the Jackson City Council must vote on resolutions. In the event that a developer defaults on bond payments, the city—or the city's taxpayers—would be responsible for making payments from its general fund.

"Technically, there is no limit to our capacity (for allocating bonds)," JRA Executive Director Jason Brookins said. "... There is a limit as it relates to what the city can pay back if the projects didn't pay for themselves."

So far the Farish Street Group has invested $9.2 million in cash and loans into the Farish Street Entertainment District, but in a Nov. 3 letter to JRA, Watkins said the process for using New Market Tax Credits and historic tax credits was going to be complex and lengthy. To stay on schedule and open venues by summer 2012, the development needs an additional $10.2 million, Watkins wrote.

Zach Taylor, Jackson Redevelopment Authority board attorney, said that on a 20-year amortization schedule, the Farish Street Group would need to pay about $600,000 to $800,000 to JRA per year to cover debt service and interest on an $8 million bond, though the exact amount will vary depending on the interest rate. Board members requested detailed revenue projections, leases and detailed financial reports from the Farish Street Group before making a final decision.

JRA is considering establishing a special tax district to create a finance structure to pay back the bonds for Old Capitol Green's parking garage. Full Spectrum South has said that the garage would have revenue from tenants and from leasing parking spaces in addition to visitor parking. In 2009, the Legislature allocated $20 million in state bonds for the garage, but the city and county must first enter into an agreement to co-sponsor the bonds, and the likelihood of that happening is uncertain. In May, Hinds County Supervisor Doug Anderson said the county did not have enough resources to commit to the project.

TCI, developer of the proposed convention center hotel, has requested $96 million in bonds from JRA. The developers are working on details of a financial arrangement with the city, including who will own the land that the hotel will occupy. The hotel equates to the highest risk for the city because it is the most money.

"We are extremely confident that the debt service and these bonds can be paid by these projected revenues, or we wouldn't have asked for it," Watkins Partners Vice President Jason Goree said.

Jackson Redevelopment Authority board member John Reeves questioned Taylor and Goree about the financial details during the meeting Nov. 9. Reeves said needed more information about the development's projected revenue to be confident.

"I don't have enough info to know if this is a good investment," he said. "You have to get past the build out, past the lease, and ask yourself: Is the public going to come down here and spend money? And I don't know."

When it comes to deciding which projects get funded, Brookins said that is up to the JRA board and the Jackson City Council.

"We have board members who have financial backgrounds and can offer their assistance and understanding. We've got other board members who are business leaders. But ultimately it comes down to what kind of economic impact can we expect from those projects, and typically, the folks who are doing those projects provide us with that information," he said.

Ward 1 Councilman Quentin Whitwell said he needed more information before commenting, but he doubted that the city would be able to fund all three major projects. "It's going to be very difficult for me to imagine that all of this debt is a good thing," he said.