Homeless and Boxed In 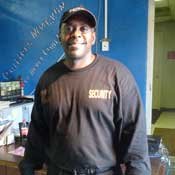 David Barney became homeless in 2010 after paying funeral expenses for his parents. He works as a security guard at Stewpot Community Services Opportunity Center.

Although David Barney was homeless for several months, he never thought of himself as living in poverty. Barney, 43, got laid off from a construction job in 2010, and after both his parents died within months of each other, he was overwhelmed with funeral costs.

The New Orleans native started sleeping in local shelters and looking for work. He sent out several job applications, but had trouble finding work. While at Stewpot Community Services Opportunity Center, Barney asked Opportunity Center Director Heather Ivery if she was hiring. He soon started working as a security guard.

"She gave me the opportunity, and I started working, and now I'm slowly climbing up the ladder to the status I was before," Barney says.

Barney oversees the day shelter, which 60 to 100 people use each day. Barney also tries to encourage people who have similar stories, telling them that their situation doesn't have to be permanent. Stewpot Community Services offers job training, housing referral services, employment opportunities, shelter and meals to individuals in need.

"I never let it set on my mind that I was living the below the poverty level and homeless," he says. "I'm not where I want to be, but I'm on my way."

Barney, who now lives in Byram, said that he sees individuals on a daily basis who feel like they can't escape their situation and become discouraged. Because they have trouble envisioning themselves with a job, they are more prone to give up looking.

"Some people get boxed in," he says. "Some people are allowing themselves to be enablers rather than reaching for a helping hand."

Individuals who live in neighborhoods where 40 percent or more of residents live below the poverty line are more likely to face additional burdens and remain in poverty, reports the Brookings Institution in its study, "The Re-Emergence of Concentrated Poverty: Metropolitan Trends in the 2000s," released Nov. 3. The report finds that areas of concentrated poverty in the Jackson area are on the rise, and that these areas create additional obstacles and burdens for individuals such as lack of quality education, increased crime rates, lower property values, and lack of goods and services. Poverty also strains local governments, which is evident when comparing Jackson to cities in the surrounding suburbs.

The study finds population in extremely poor neighborhoods (where 40 percent or more of residents live below the poverty line) in the country rose by one-third over the past 10 years, and southern metro areas reported a 33 percent increase in growth in the number of poor individuals in concentrated poor areas. The Jackson metro area ranks No. 6 for its increase in concentrated poverty for the 100 cities profiled in the Brookings report with a 12.2 increase.

The city of Jackson had the seventh highest increase in concentrated poverty in the country of the cities profiled at 22.4 percent.

In the Jackson metro area, the concentrated poverty rate was 22.7 percent from 2005 to 2009, compared to inside the city limits where the rate was 35.2 percent. The suburbs had a 10.6 percent rate of poverty. The total metro area has 20,892 poor people living in extremely poor neighborhoods, and 4,954 of those people live in the suburbs.

SOURCE: Half in 10 Campaign