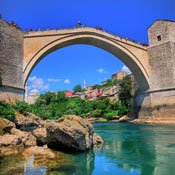 Gentrification is a term that is often misunderstood, but is an important issue to address as cities go through revitalization. As poor neighborhoods once riddled with blight become attractive for younger, more affluent tenants, the poor, minority and older residents on fixed incomes are at risk for displacement as property values rise. So how do communities prevent gentrification?

• Make a long-term commitment
A report by the National Institute for Housing finds that lower-income neighborhoods lose "social capital" when younger residents under 35 move into the urban area, but later move away to the suburbs for better schools and amenities.

• Build bridges, not walls
When a different socio-economic group moves into an area, it can bring a different set of norms and beliefs, and create isolation between neighbors. Newcomers to neighborhoods should make an effort to be involved and active by joining neighborhood associations and community organizations.

• Invest in local businesses
Ensuring that economic wealth is distributed to lower-income areas is essential to keeping residents and businesses intact. Shop at locally owned businesses in or near your neighborhood whenever possible. In Jackson, Watkins Partners is a diverse development group currently working in the Farish Entertainment District. Watkins is working with original business owners on Farish Street to provide rent-to-own options.

• Developers and residents share goals
When new developments come into a city, it's important for developers and residents to share the same vision. If not, neighborhoods must be able to mobilize and voice concerns. One way to unify a neighborhood is to develop a master plan for the community's future vision. Currently, the West Jackson Development Group and Duvall Decker Architects are working on a master plan for West Jackson to revitalize the area as a whole.

Transforming Our Communities
From the 1970s to the late 1990s, decay and crime had taken over the East Lake Meadows, a 650-unit public-housing project in Atlanta, Ga. Crime was 18 times higher than the national average, and the average age for a grandparent was 32.

Tom Cousins, a developer and philanthropist, created the East Lake Foundation, formed with public and private partners to revitalize the community and create mixed-income apartments. When construction began, officials provided residents with housing vouchers for temporary relocation. All residents took part in the planning process, and once they returned they were able to obtain affordable housing. The foundation also provides job assistance and after-school programs.

East Lake Before and After

After
• 5 percent of adults rely on welfare.
• 84 percent of students meet or exceed state math standards.
• Employment rate is 71 percent.

Eyes on the Street

Keeping neighborhoods safe is essential to prevent residents from moving out. Writer and activist Jane Jacobs coined the term "eyes on the street," meaning that in order to discourage crime, buildings and doors need to face the streets to give a sense of oversight. Increasing pedestrian activity on the streets is another key element to preventing crime because more eyes on the street means less opportunity for criminal activity. Here are other tips for design that prevents crime.

• Trim plants and vegetation outside your home so that they don't block sight.
• Create open barriers such as chain-link fences that promote visibility.
• Separate public space from private space with signs.
• Provide a visual connection between residential and public spaces by placing widely used rooms like kitchens and living rooms in good view of streets.