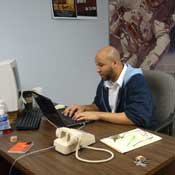 Michael Williams is a production technician at the Russell C. Davis Planetarium. The city hired him through its new Fresh Start program that helps ex-offenders find work.

Michael Williams is the man behind the movie projector at the Russell C. Davis Planetarium. He is responsible for making sure the independent art films and sky shows run on schedule without any technical glitches.

The 32-year-old former Jackson State University student and music producer also served five months in jail this year for a felony drug possession charge in 2010. It was the first time he had ever been arrested.

Upon his release May 12, Williams worried that he would not be able to find steady employment. That's when he found out about Jackson's new Fresh Start program, which helps ex-offenders find jobs and provides other services to them.

Ex-offenders in the city will be able to get even more help finding jobs due to a $50,000 grant from the U.S. Department of Justice. The grant will help the city strengthen the Fresh Start program.

During the Jackson City Council's work session Oct. 31, Mayor Harvey Johnson Jr. announced the grant for the city program. "A large majority of the crimes being committed now are being committed by people who have a record of previously committing a crime," Johnson said. "We really need to tend to the ex-offender re-entry issue as a way of preventing crime. Cutting back on recidivism, we think, will be an offshoot of this effort."

In January, the city's Human and Cultural Services Department started the groundwork for Fresh Start with $50,000 from the city's general fund. The U.S. Department of Justice grant matches the city's existing funds, and Johnson said he is looking for more funding.

"It started off very quietly, because we were just in the planning stages, and we don't want to build expectations until we have the resources to develop the program," Jackson Department of Human and Cultural Services Director Michael Raff said.

Fresh Start Coordinator Karen Quay helps offenders write resumes, coaches them through the interview process and then refers them to businesses for employment based on their skills. To date, the city has hired 10 ex-offenders and is helping a total of 70 ex-offenders find work. The program also reviews ex-offenders' case files and vets them before helping them find work.

Before he got a job with the city, Williams said he worried about the stigma an employer would face for hiring an ex-offender. He said he is lucky, because unlike most offenders, he had an education and job experience.

"I don't think my situation is representative of the average situation," he said. "I had a pretty good education and background. I just got caught up in a couple of bad decisions. But a lot of guys in there don't have that."

Williams said that employers who are concerned about hiring ex-offenders should not rush to judgment, but take applicants on a case-to-case basis. "That should not discount someone from being able to do the work," he said. "Anybody can fall into a number of circumstances and find themselves in a bad situation or behind bars really easily."

During the Oct. 31 meeting, council President Frank Bluntson and Ward 7 Councilman Tony Yarber expressed concerns that the program was moving too slow. The grant only provides funding for planning, and not for actual implementation of the program.

"Since January, there has been a pilot program—that's 11 months of data that can be looked at. In this situation, it appears that the $50,000 is to just start the program when the program started almost a year ago. It seems like those funds could go to enhance the program instead of start it," Yarber said.

Yarber said he is looking into NAACP initiative called "ban the box," which calls for employers to remove the part of a job applications asking applicants if they have ever been convicted of a felony.

"The bottom line is, when it comes to getting folks getting out of jail, their empowerment is going be to employment," he said.

Raff said that the additional funding provides resources for the program's planning, so that it can grow its efforts and make partnerships with existing businesses in the city. He said will continue to help ex-offenders, but he is being cautious about advertising the services before having a strategic plan.