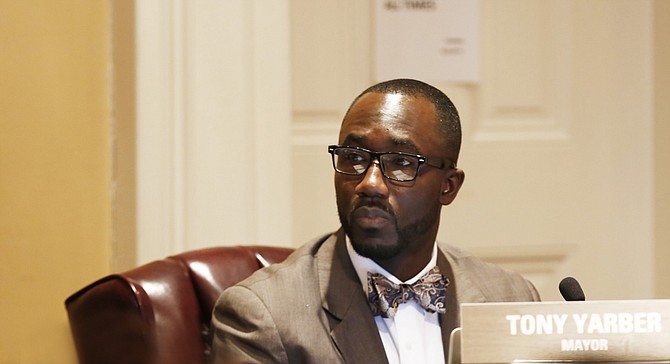 Mayor Tony Yarber praised his administration's efforts to find $200,000 in funding for the Greater Jackson Arts Council. The Jackson City Council approved an additional $25,000 back into the GJAC, bringing municipal funding up to $105,000. Photo by Imani Khayyam.

JACKSON — After facing cuts, the Greater Jackson Arts Council grew by $105,000 after the Jackson City Council voted Tuesday, Dec. 27, to restore one of the cuts to the local Department of Human and Cultural Services, which administers the yearly municipal allocation to the arts organization.

The GJAC's activities include fundraising, distributing grants to local artists, organizing events and festivals. It also partners with arts groups, including the Mississippi Symphony Orchestra, the Mississippi Jazz Foundation and the Jackson Music Awards. It helps run the Arts Center of Mississippi in downtown Jackson.

Michael Raff, director of the Arts Center of Mississippi and a deputy director of Human and Cultural Services, told the council that the council must approve re-allocating the funds to the GJAC. Ward 2 Councilman Melvin Priester Jr. asked Raff about the effect on the City's already-strained financial resources.

"I like to see where money is coming from and going," Priester said.

"Of this money, $25,000 is coming from the budget of Human and Cultural Services, and $80,000 is coming by a special motion made by you all, during the budget hearings, taking $80,000 out of the reserves and putting it in the arts council grant," Raff told the council. "We have it. We are waiting on y'all to authorize it."

In September, soon after the city council's budget deliberations, the GJAC released a statement saying the City had cut its $125,000 yearly contribution to the organization with little to no forewarning. That sparked a "#SavetheArts" outcry. At the time GJAC cuts went public, the city council had just reduced the mayor's office budget by $100,000.

The administration, in response, encouraged the city council in a press release to cut the city clerk's office budget to meet the GJAC shortfall. Instead, the city council chose to remove $80,000 from the budget reserve to bolster the GJAC allocation.

Raff told the city council last week that cuts were deep across the Human and Cultural Services department, not the GJAC alone.

"We had $125,000 in (cut from GJAC), and with the reduction of force we have had to let 12 people go. We have closed a child-care center. We've closed a senior center. We've really had to pull back on our homeless program and our Fresh Start programs," Raff said. "So this is a part of the big cut-back that Human and Cultural Services had to experience."

Michelle Battee-Day, interim director of finance and administration for the city, said last week that the current allocation was for the remaining $25,000.

"If you recall during the budget review process, they reduced the amount that they were giving to the Jackson arts council. The $25,000 is what was remaining to be appropriated to them," Battee-Day said. "They are just coming forward now to say that they actually want to do the payment to them."

The city council agreed to pay the GJAC the sum for a one-year term, which means that the body will have to approve funding again during the next budget cycle.

"I am not sure how far off," Yarber said, "but we have tried to do our level best to find funds outside of the City to support them." He said the administration found a total of $200,000 in outside funding for the GJAC this year.

Janet Scott, executive director of the GJAC, attended the meeting and expressed her gratitude to the council.

"We do appreciate the work of the city council, the members of the city council, that did come back in with the $80,000 to help us with our operations, and then for $25,000 from Human and Cultural Services," Scott said. "The $200,000 that the mayor is talking about is restricted dollars that are (for) specific programs. We have some wonderful programming that we will be doing in the City of Jackson, which we have already started, with those dollars."

Ward 3 Councilman Kenneth Stokes said the GJAC received support because of a commitment to both rich and poor parts of the city, a tendency he wanted to see continue in the future.

"The thing about the arts council is that, in my years of watching, they do not discriminate," Stokes said. "That's the issue that people are concerned about, making sure that the money will continue to go to the poor neighborhoods like (GJAC has) done over the years when the cuts come," Stokes said.