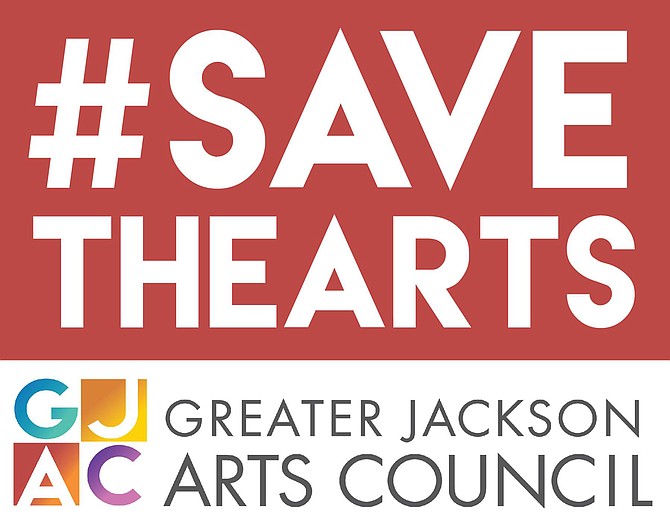 Community supporters posted this logo to their social-media pages in the wake of the news that Jackson planned to defund the Arts Council.

JACKSON — In uncertain financial times for the City of Jackson, some council members worry that the mayoral administration could deploy departmental cuts, such as the defunding of the Greater Jackson Arts Council, as political salvos.

Last Wednesday, Sept. 21, the Greater Jackson Arts Council, or GJAC, announced in a press release that the City of Jackson had nixed its contribution of well over $125,000 a year, about a quarter of the organization's total expected budget for the year, around $500,000.

Janet Scott, GJAC executive director, was out of town when the organization learned of the cuts, but made a statement through a press release.

"This move is devastating," Scott said in the release. "And it strikes right at the heart of underserved communities, artists of color and low-income students.

"I understand the City's budget challenges and expected some sort of funding reduction. But to be zeroed out without any discussion? It's a slap in the face to the citizens we've served for the last 35 years."

Jon Salem, assistant director of the GJAC, said the organization had no warning prior to the news of the cuts, and that since then it has concentrated on raising support from the community.

Salem said that the organization knew time was of the essence after the city informed them of the cut.

"I knew that if it was really, really bad we didn't have much time to stage an appeal for reversal," Salem said during a Sept. 22 interview. "It's 25 to 30 percent, and it's basically our stabilizing floor operationally, so that we can leverage it with other grants and other sources. And with a budget our size, you strip that away without warning, and it is completely destabilizing."

The GJAC has its hands in a lot of pots, distributing more than $136,000 over the last year to 187 grant recipients ranging from individual artists to festivals and organizations like Midtown Partners and the ballet.

The organization's total budget for the year is $500,000, and corporate sponsorships and fundraising campaign comprise the remainder after the city's usual contribution. Some of those grant funds, Salem said, end up as economic drivers that create jobs.

Salem said the GJAC staff, four full-time and two part-time employees, also help run the City-owned Arts Center of Mississippi building, the old art museum nestled in the "art quadrant" downtown between the convention center, Thalia Mara Hall and the newer Mississippi Museum of Art on the opposite side of the Art Garden.

"If somebody wants to have an event in the epicenter of downtown, in the arts quadrant, the museum is just out of reach for a lot of people to have events," Salem said. "It's an expensive space, and you have to use their caterer, and the same with the convention center. And then Thalia Mara Hall is for big concerts and performances. We are kind of the accessible community space for this quadrant."

Salem said the organization has spent money on the building itself in the last few years. "We have invested in facility planning and actual capital improvements of over $200,000 of money we've raised, completely independent of the city," Salem said.

"We even put hot water in the building."

Not only would the investment into the arts community dry up, Salem said, but the original mission of the group when it started 35 years ago—to bridge the racial and economic divide in the city—would also disappear.

"At the time the Jackson arts scene was almost exclusively white in terms of the support it was getting," Salem said. "The mission at that time was to be an equalizing agent to ensure that city resources and community resources were accessible to underserved communities, to artists of color, to low-income students and that has remained our mission."

"There's no one else duplicating our services and no one standing in line to replicate them if we go away."

Friction Between the Branches

Mayor Tony Yarber called on the council to make cuts to the Jackson city clerk's office to make up for the shortfalls his office claims made the GJAC defunding inevitable. This comes after the council ratified amendments to the budget that cut the mayor's office by $100,000 along with other departments, including the city-run golf courses.

"Rescinding the amendments would, most notably, restore funding for the Public Education Government Network and the Grove Park Golf Course. Those closures were not in my Administration's original proposed budget," Yarber stated in a release.

"I further call on the City Council to restructure the City Clerk's Office to realize enough savings to restore funding to the Greater Jackson Arts Council. The Clerk's Office did not undergo a restructuring this budget year, even though nearly all other City departments were restructured or reorganized."

Some of the city council members disagree, alleging that Yarber is using the GJAC as a part of a political move.

"I really think that this is a political stunt of sorts by the administration to make the city council look bad or look mean, and I don't think that it's an accident that we didn't know anything about it because they knew that we wouldn't have gone along with it," Ward 1 Councilman Ashby Foote said during a Sept. 22 interview.

"It put us in a position of either looking like we weren't aware of what we were doing, or we were doing something that was hard-hearted, which is not the case."

"(The administration) have subsequently admitted that after that presentation they realized their numbers were incorrect, and they changed the numbers," Priester said.

"And that's when they took out the money for the Jackson Arts Council."

"For reasons that are completely unclear, the mayor has an agenda against the Greater Jackson Arts Council," Priester said. "We're going to keep looking about what we can do to save the greater arts council and some of the other areas, but if there is a place to cut, further cuts need to come from the mayor's office.

"When I look around the city I see so much gross mismanagement by people under his direction and control."

Shelia Byrd, director of communications for the City of Jackson, stated in a phone interview on Sept. 26, that the call for cuts to "outside funding," such as the GJAC, originated in suggestions presented to the administration by the financial consultant for the city, Michael Thomas for Systems Consulting. She referred back to the mayor's statement, quoted above, for a response to council's allegations.