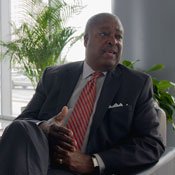 Ex-offenders will be able to get more help finding jobs due to a $50,000 grant from the U.S. Department of Justice that will help the city strengthen its Fresh Start program, Jackson Mayor Harvey Johnson Jr. said today.

During the Jackson City Council's work session this morning, Johnson announced the grant for the city program, which provides services to ex-offenders.

"A large majority of the crimes being committed now are being committed by people who have a record of previously committing a crime," Johnson said. "We really need to tend to the ex-offender re-entry issue as a way of preventing crime. Cutting back on recidivism, we think, will be an offshoot of this effort."

In January, the city's Human and Cultural Services Department started the groundwork for Fresh Start with $50,000 from the city's general fund. The U.S. Department of Justice grant will match the city's existing funds, and Johnson said his administration is looking for more funding opportunities.

"It started off very quietly, because we were just in the planning stages, and we don't want to build expectations until we have the resources to develop the program," Jackson Department of Human and Cultural Services Director Michael Raff said.

Fresh Start Coordinator Karen Quay said just this morning she received a call from an offender who had gotten out of prison two weeks ago. He has two felonies and needs help finding work, she said. Quay said she helps offenders write resumes, coaches them through the interview process, and then refers them to businesses for employment based on their skills. To date, the city has hired 10 ex-offenders through the program and helped a total of 70 ex-offenders find work.

Raff said that the additional funding provides resources for the program's planning, so that it can grow its efforts and make partnerships with existing businesses in the city. He said the program will continue to help ex-offenders, but he is being cautious about advertising the services before the program has a strategic plan.

"In order to get these large federal grants through the U.S. Department of Justice, you have to have a strategic plan," he said. "This will help us identify the different components of the program. Once we have completed the planning progress, we are more inclined to get more money from the Department of Justice."