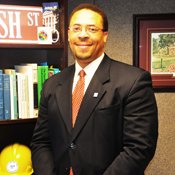 Bennie Hopkins is the new director of planning and development for the city of Jackson.

As Bennie Hopkins prepares for his new role as the city of Jackson's director of planning and development, he reflected on what he has learned from working with Corinne Fox, who is ending her 45-year career in regional and urban planning today.

For the past year and a half, Hopkins has served as the deputy director of urban planning and worked under Fox, who Jackson Mayor Harvey Johnson Jr. appointed as director of planning and development in July 2009. In 1969, Fox became the first woman to receive a degree in urban planning from the University of Mississippi and was instrumental in forming the city of Jackson's master plan in 1996.

"What I have found with Corinne is that she has tremendous institutional knowledge of not only the intricacies of Jackson's planning landscape, but also the planning landscape of the entire state of Mississippi. It's been a treat to work with her and glean some of that working knowledge."

Today, Hopkins is helping organize Fox's retirement party set for this afternoon. On Monday, he will officially begin his role as director of planning and development.

The 40-year-old Meridian native earned his bachelor's degree in industrial technology from Jackson State University in 1995 and his master's degree in urban and regional planning from JSU in 2001. He has spent the majority of his career as a public servant, starting out by working as a building inspector for the city in 1996 and eventually working his way up to senior planner.

"All of those offices touch on some aspect of development or redevelopment, reinvestment or code enforcement in the city," he said. "It is a tremendous task that we do to enhance quality of life for the citizens of Jackson."