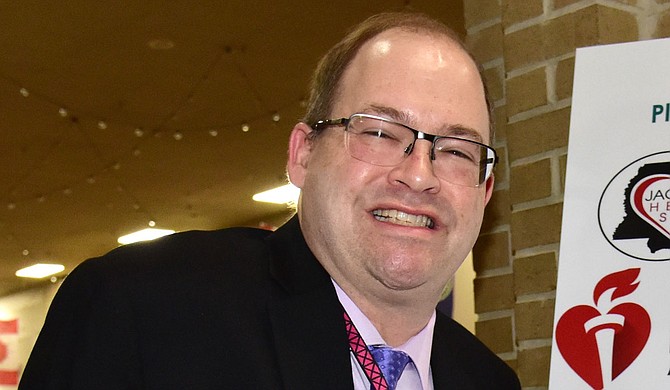 Chris Kochtitzky taking part in the work he loved at the “Move Your Way” event held at the Jackson Medical Mall in February 2019. Photo by Scott Crawford.

Jackson lost a favored son on Sunday May 3 in the death of Christopher “Chris” Kochtitzky in Atlanta. “Chris was always interested in—and promoting—Jackson. He was our ‘ambassador’ so-to-speak at the CDC,” says Scott Crawford of Jackson, a longtime friend. This sentiment was echoed by Alison Kelly, a nearly three-decade colleague of Chris’ at the CDC. “He loved Jackson and was always an advocate for Jackson,” she says.

Chris was the son of Robert Kochtitzky, a celebrated civil-rights activist who was active in the Jackson area during the height of the civil-rights struggle and later in life became an environmental activist.

Chris grew up in Jackson and graduated from St. Joseph Catholic High School in 1985. He received a bachelor's degree in political science from Millsaps College in 1989 and attended Florida State University from 1990 until 1992, when he earned a master’s degree in planning with a focus on urban and regional planning. Kelly says he was one of the first urban planners to work at the CDC.

Kochtitzky began his career with the CDC In 1992 as a presidential management intern and worked in various offices and branches of the department. In 2006, he was appointed to lead the healthy community goal team, where he served until 2009. And from 2009 to 2017, he served as the associate director of program development for the National Center for Environmental Health’s Division of Emergency and Environmental Health Services before joining the Division of Nutrition, Physical Activity and Obesity (DNPAO) as a senior advisor for the Physical Activity Branch.

As a senior advisor in DNPAO, he served as an expert on the development of evidence-based guidelines and recommendations to increase physical activity across the country. He provided technical and subject matter expertise to state and community programs in the areas of policy, systems and environmental interventions designed to promote active living. In his role with DNPAO and his collaboration across CDC, Chris supported program evaluation, strategic planning and partner and stakeholder engagement in the areas of active living and related health promotion.

He authored several influential publications including an article in CDC’s Morbidity and Mortality Weekly Report on urban planning and public health in 2006 and a 2011 article on ensuring mobility-supporting environments in aging populations published in the Journal of Aging Research. He also wrote multiple book chapters on environmental health law and the impact of the built environment on human development. He presented at numerous conferences and meetings throughout the United States and was recently recognized as a Public Health Agent of Change by CDC’s Office of Minority Health and Health Equity.

His colleague Kelly said after that one of these publications, Chris and his co-author got a fair amount of negative publicity. But Chris was not concerned and gave her a quote that his father before him used, “It was his goal to comfort the afflicted and afflict the comfortable,” she says, adding about his final position at CDC, “He became a really big fish in what was a small pond when he started—but really looking at the built environment and physical activity and how all different kinds of populations, not just people with disabilities, were facing obstacles in being more physically active, which is one of the most important public health interventions we have.”

“He believed in the inherent goodness of human nature more than most of us, which inevitably creates a positive ‘self-fulfilling prophecy.’ It was his super-power,” he says. “Chris often asked about Jackson, how we were doing, and was genuinely interested in hearing all the details of how we were improving our infrastructure to make it more welcoming and pedestrian friendly, to promote wellness, access for older adults and the disabled, and to promote physical activity. It was one of Chris’ missions in life to create a more accessible and healthier built environment.”

Other friends and colleagues spoke on behalf of Kochtitzky, the agent and the man.

“Chris was a hero to hundreds of professionals in the fields of public health, equity, transportation and community planning,” says Ken Rose, a colleague at the CDC.

Kelly adds, “He was 100% heart, and he was an incurable optimist. He loved Jackson. He really wanted me to come to Jackson with him, and we did and I got a tour of the city like you wouldn’t believe. He was such a proud son of Jackson.”

The CDC has set up a Memorial Fund in Kochtitzky’s honor. Funds raised will go toward projects that focus on building a bridge between urban planning and public health. To learn more, or to donate, visit give.cdcfoundation.org/Kochtitzky.

CORRECTION: The web editor originally posted the wrong photograph with this story. We apologize for the error.