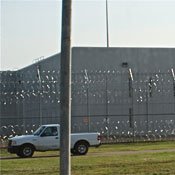 The Fresh Start Task Force is working to keep people from returning to the state's prisons, including the State Penitentiary at Parchman, pictured. Mississippi's recidivism rate is relatively low, but it has risen in recent years.

Jackson is making an effort to stop the revolving door in the state's prison system. One of the biggest keys, according to the Fresh Start Task Force, is helping formerly incarcerated people learn skills and find jobs.

Mayor Harvey Johnson Jr. appointed a few dozen local leaders to the task force earlier this year to plan the Fresh Start program. The goal of the program is to reduce recidivism among Mississippians who leave the criminal-justice system.

The percentage of inmates in the state who return to prison within three years is relatively low compared to the national average, but it's rising. The Pew Center on the States reports that Mississippi's recidivism rate between 2004 and 2007 was 33.3 percent, up from 26.6 percent from 1999 to 2002. The national average was 43.3 percent in 2007, down from 45.4 percent in 2002.

The state's inmate population as of May 29 was 21,820, according to the state Department of Corrections. John Hopkins, director of treatment and programs at DOC, said that the department offers vocational skills training to prisoners, such plumbing and carpentry. Employers must be willing to hire former prisoners once they are out, Hopkins said, to keep them from returning to prison.

"There are a large number of people who want employment and want to try to be responsible," Hopkins said. "And they can't get (a job). So then, what happens when you can't get a job?"

The Fresh Start Task Force is made up of representatives from a range of professional fields including city government, law enforcement, business, mental health, domestic abuse treatment, corrections and the judicial system.

The group met Thursday, May 31, at the Entergy Lodge on Northside Drive to begin the planning process of the Fresh Start program. Karen Quay, offender re-entry program coordinator, said the turnout and energy at the meeting were great.

Within the task force, Quay and other leaders split members into work groups that highlighted their expertise, such as employment, education and skills training, housing, law enforcement, and more.

The employment group includes, among others, group leader Don Watson of D. Watson and Associates, Jeff Good of Mangia Bene Restaurant Group and Lurlene Irvin from the Center for Business Development at Jackson State University.

"We got some concrete ideas about how the business sector needs to be involved and (about) recruiting other business people," Quay said.

"We've got some good leadership in that sector (and) in that work group."

Quay said the task force will promote the program both to business owners and to the community to try to get more employers to hire former inmates.

One of the main goals of the meeting was to create a mission statement for the group, and they created this statement: "The mission of the Fresh Start Re-Entry Task Force is to implement a comprehensive, seamless system of innovative services designed to facilitate the successful re-entry process from corrections to community."

The program needs to bring inmates in between one and three years prior to their release to receive adequate job training and skills, Quay said.

The city's program will likely bring in inmates closer to one year prior to release, though, due to a lack of resources to support longer stints in the program.

Jackson was one of 15 cities, out of more than 600 applicants, that received a $50,000 grant from the federal government through the Second Chance Act last year. The grant matched a $50,000 investment from the city's general fund to implement the task force and the planning stages of the project. Chris Mims, Johnson's director of communications, said the city and the mayor are actively pursuing funding to implement the project.

The group also invited Eddie Walsh, executive director of the Second Chance program in Memphis, to speak during their meeting. He said Memphis started its program after officials noticed a large portion of the city's money was going toward correctional facilities and public defenders' offices.

"We determined we had to stop and look at ways we could stop this money from going out, because the same people were going through the (public defender's) office going to and from jail," Walsh said.

One program Memphis started to respond to the problem was Building for the Future. Under the program, inmates build housing materials in the prison to be used by charities such as Habitat for Humanity. The project, Walsh said, gives inmates a sense of being involved in communities and cuts costs for the charities.

"We taught inmates a viable skill, an employment-retention skill about building panelized housing," Walsh said. "We taught them how to make bricks. They might not have been a bricklayer, but they can mix the mud."

The meeting Thursday was the first for the task force since an orientation earlier this year. The planning stage of the program will continue through the summer. The task force must submit a strategic plan to the U.S. Department of Justice by Sept. 30 to be considered for implementation funding.