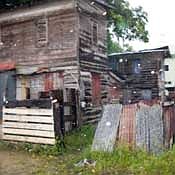 If you struggle to pay your bills and don't know where your next meal is coming from, studies show you are more likely to be incarcerated. Once you fall into that cycle, it's difficult to break out. When people get out of jail, they usually have no money or a stable home to return to. If you are African American, the chances that you will be incarcerated are even higher. Studies show that people resort to crime only if they determine that potential benefits outweigh the cost or consequences of committing that. Therefore, people living in poverty are more likely to commit burglary, larceny or theft.

Crime Follows Poverty Because:
• Low-income and African American communities have a higher percentage of adult males behind bars (and many for drug or lesser crimes than whites). That means fewer fathers, grandfathers and mentors for young men to look up to. Without a stable father figure, young men are more likely to follow the paths of their father.

• The "war on drugs" has traditionally targeted low-income, minority communities where many street dealers live instead of the often white and well-to-do suppliers.

• A criminal record reduces one's opportunities for employment; thus, they are more likely to turn to crime again.

• A neighborhood's goals and values are reflected in the amount of crime that occurs. "Neighborhoods and Violent Crime: A Multilevel Study of Collective Efficacy" by Robert J. Sampson, Stephen W. Raudenbush and Felton Earls, published in Science magazine in 1997, found that the ability of communities to obtain resources and public services correlates with the signs of disorder. For example, the fewer resources a community has to invest into their homes, the more likely it is to find vacant houses, vandalism and burned-out buildings—conditions that breed crime.

Statistics:
• Lower-class youth commit four times more violent crimes than middle-class youth.
• The total cost of crime in the U.S. is $2 trillion per year—$1.3 trillion comes from street crime and the remainder from economic crimes such as fraud.
• The victimization costs of street crime are approximately $700 billion per year.
• Poverty raises the cost of crime by at least $170 billion annually.
• Fifty-three percent of people in prison earned less than $10,000 per year before incarceration.
Source: "The Economic Costs of Childhood Poverty in the United States," The Journal of Children and Poverty March 2008

High Crime Rates Among Poor: Why
It is a fact that neighborhoods where the poor are concentrated are more prone to high crime rates, and poor residents are the most common victims of crimes. Beyond a simplistic answer of "poor people want/need more stuff so they have to take it," what are other, more researched answers? Oscar Newman offered several in "Creating Defensible Space" (U.S. Department of Housing and Urban Development, 1996, $15):

• A one-parent household headed by a female is more vulnerable to criminal attack.
• Families with only one adult present are less able to control their teenage children.
• Young teenage mothers are often victimized by their boyfriends.
• The criminal activity by the poor is tolerated, if not condoned, among the poor.
• The poor, and particularly the poor members of racial minorities, are unable to demand as much police protection.
• Committing crimes against residents in rundown and "ghetto" areas requires minimal skill and risk.

"Inevitable or not, the fact remains that the inner city is now where America's least privileged are most concentrated, a condition exacerbated by sprawl. Two aspects of suburbanization contribute dramatically to the plight of the urban poor:

Question of the Day: Where are the jobs?
They may be shrinking for everyone, but it was already bad for the poor. A congressional study found, pre-recession, that two-thirds of all new jobs are being created in the suburbs (where many city poor do not have transportation to get to). Meanwhile, the study found that three-quarters of welfare recipients live in the inner city or urban areas.

And it found that 95 percent of welfare recipients do not own a car.

Rich Cities, Poor Cities
Many people, politicians and corporate media love to talk about Jackson's placement in CQ Press'—let's be honest, bogus—"dangerous" rankings every year. But the part they don't always pick up on is how many poor cities tend to have more crime. The authors of "Suburban Nation" (North Point Press, 2001, $19) explain why certain cities are richer (and safer) and others are dirt-poor (and suffer the resulting effects of crime):

Pop Quiz: Who is most likely to be a victim of crime?
1. Uber-wealthy
2. Middle class
3. Poor
4. People with nice cars

Answer: The poor. They are also the least likely to report it. Source: "Defensible Space," Oscar Newman, 1996