Who's In a Gang? Who Uses Crack? | Jackson Free Press | Jackson, MS

Who's In a Gang? Who Uses Crack? 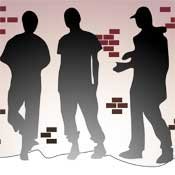 State and local jurisdictions develop their own definitions of "gangs," which can lead to confusion and ill-defined fears of gang violence. The Jackson Police Department does not have an official definition of a gang, but the Mississippi Street Gang Act says that a gang is a group of three or more people with an established hierarchy that engages in felonious criminal activity. The National Gang Intelligence Center (http://www.nationalgangcenter.gov) says two-thirds of gang members are adults over age 18; city and suburban gangs especially have majority adult membership.

Assistant Police Chief Lee Vance said that, in some ways, deciding which criminals are in a gang is inconsequential, because they are prosecuted for their crimes regardless of gang affiliation.

Vance said while Jackson does have organized drug traffickers, JPD doesn't see the types of violence associated with gangs like the Black Gangster Disciples and the Vice Lords—larger organizations active here in the late '80s and early 1990s that identified themselves as gangs and fought to establish turf, but that have shrunk since the mid-1990s.

What makes a "gang" can be subjective, Vance said, because different agencies and people have different definitions or ideas of what a gang is. "There are some people who think that you get a group of kids who wear the same T-shirt to school every day and (they are a gang)," he said. "I think too many times, the whole conversation gets convoluted, because people don't know what you're talking about."

The National Gang Intelligence Center (http://www.nationalgangcenter.gov) reports that, as of 2008, Hinds County had fewer than 500 gang members, as did Rankin County. Adams, DeSoto, Grenada, Harrison, Jackson and Marion counties reported more gang members than did Hinds County. The state as a whole had two to three gang members per 1,000 people.

However, a gang out of Chicago, the Simon City Royals, has made local news in recent years for establishing itself in Mississippi, as well as Louisiana, Wisconsin and Florida. The Royals are the largest white street gang in the U.S., known for violence and prison recruitment, and specializes in the sale of methamphetamine. It has been especially strong in Rankin County, especially Richland. In 2008, police arrested nine Royals for a variety of charges including meth possession, gang activity and aggravated assault.

NGIC warned that gangs have seen a resurgence in some areas in recent years; the largest gang growth percentage is in suburban areas (up 33 percent).

The NGIC defines a gang as:
• The group has three or more members, generally aged 12–24.
• Members share an identity, typically linked to a name, and often other symbols.
• Members view themselves as a gang and are recognized by others as a gang.
• The group has some permanence and a degree of organization.
• The group is involved in an elevated level of criminal activity.

Breeding Ground
1. Socializing agents, such as families and schools, are largely ineffective and alienating. Thus, conventional adult supervision is largely absent.
2. The adolescents have a great deal of free time not consumed by other pro-social roles (that benefit others).
3. Members have limited access to appealing conventional career lines—good adult jobs.
4. The young people must have a place to congregate—usually in a well-defined neighborhood.

Risk Factors
1. Prior and/or early involvement in delinquency, especially violence and alcohol/drug use
2. Poor family management and problematic parent-child relations
3. Low school attachment and achievement
4. Negative labeling by teachers and others
5. Association with aggressive and/or delinquent peers
6. Neighborhoods where large numbers of youth are in trouble with drugs and firearms readily available

Mississippi-to-Chicago Pipeline
The Chicago Police Department regularly warns that Mississippi, along with neighboring Indiana, is a top source for weapons used in violent crimes there. "Straw purchasers" with no police record buy many guns legally in Mississippi that turn up on Chicago streets, reselling them on the black market there. For instance, .45-calibre handgun purchased legally at Ed's Pawn Shop in Byhalia killed Chicago police officer Officer Thomas Wortham IV in 2010. The young father originally hired to buy it at Ed's had an infant daughter dying from a brain tumor and feared losing his $7.50-an-hour forklift job, The Chicago Tribune reported.

Rock, Powder, Prison
The United States has barely hidden some of the more discriminatory aspects of the drug war. The difference in sentencing—and who goes to prison—for crack (rock) cocaine versus the powdered kind illustrates the inequity well. In 1986, when Congress enacted the mandatory sentencing drug laws (that have filled our prisons to the brim), it decided that crack cocaine is a distinct drug with harsher penalties than those for powder cocaine, the kind favored by more upper-crust (and white) users. Congress set the five-year mandatory sentence to kick in for the sale of 500 grams (a bit over a pound) of powder coke, but for only 5 grams (an amount the size of two pennies) for crack. That means a dealer could sell 100 times more powder before going to prison. The law ended up targeting people of color even though more whites buy and use both kinds of cocaine, both kinds of cocaine are equally addictive, and violence surrounding crack sales was only a few percentage points more than the powder version. Still, the kicker ...

Cradle-to-Prison Pipeline
The Children's Defend Fund warns that children, especially those of color living in poverty, are at high risk of going to prison: 1 in 3 black Mississippi boys will likely be imprisoned in their lifetimes under current conditions and practices. Read a cradle-to-prison factsheet here and ponder these facts:

I am writing you to invite you to visit and review our Facebook page Celestial Monks, and also to ask you to please help us spread the news of this webpage, that may help some of our sisters and brothers who may need guidance on their journey to find themselves and spiritual enlightenment. We are on a mission to inform as many of our "Gang banging sisters and brothers", as we can about the lies they've been taught and the truths that has been hidden from them. Thank you, and May the Creator's light always be with you.