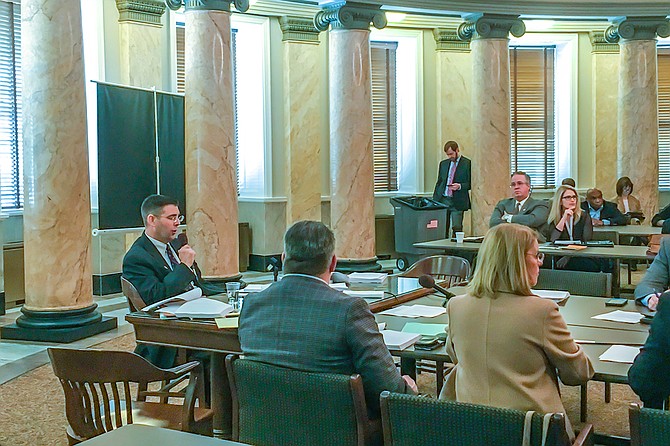 Rep. Andy Gipson, R-Braxton, supported the "Mississippi Anti-Gang Act," and his Judiciary B Committee passed it on to the full House this morning. Photo by Arielle Dreher.

JACKSON — Rep. Andy Gipson, R-Braxton, called the "Mississippi Anti-Gang Act" one of the most significant pieces of legislation the Legislature could pass in 2018. The bill would make "criminal gang activity" a separate offense from any underlying misdemeanor or felony a person is accused of if prosecutors can prove they are gang members.

The new act, a version of an expanded "gang" law that failed last session, would make it easier for law enforcement and prosecutors to label a suspect as a gang member and less challenging to prove he or she is part of a larger conspiracy, thus drawing additional prison times tacked on to time served for specific crimes they might commit. Law enforcement often use the controversial threat of additional charges and prison time as a way to get suspected gang members to testify against other ones.

Jimmy Anthony, a regional vice president of the Mississippi Association of Gang Investigators who has been lobbying for the expanded gang law for at least two sessions now, told lawmakers that gangs are active in all 82 counties in Mississippi.

"The biggest concern we have is how the adult gang members are using our children to commit these crimes because of the opportunity for lesser sentencing, and of course, the older gang members themselves are benefitting," Anthony told the House Judiciary B Committee this morning.

The solution in House Bill 541 appears to be adding an extra offense for being associated with a so-called "gang" with language that makes it easier to categorize a suspect as being part of a criminal gang, giving authorities more leverage to get them to talk or to bring additional charges.

Lora Hunter, an attorney for the Mississippi Department of Public Safety, told lawmakers about a recent gang assessment conducted statewide. She said 125 law enforcement agencies participated in the study conducted by the Mississippi Fusion Center, a subdivision of the state's Homeland Security office and DPS. Hunter said the assessment revealed 46 of the most prevalent gangs in the state, with the well-known Vice Lords, Gangster Disciples and Simon City Royals topping that list. 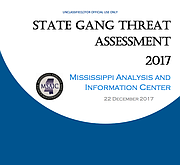 The study itself, which Homeland Security provided to the Jackson Free Press this week, is filled with self-reported numbers from agencies around the state. The various police agencies may or may not use consistent data for who is actually a member of a gang or a small copycat crew or group of young people parroting hand signals on Facebook or popular colors used by established criminal organizations.

The study acknowledges that groups it mentions may not have the "established hierarchy" or connections to larger organized criminal gangs that state law currently requires for categorizing gang members. "Emerging trends within Mississippi include hybrid gangs, neighborhood cliques, changes in established groups, and an increase in the presence of national gangs," the report states.

A "neighborhood clique" often consists of young people of various races parroting gang culture, and studies show that many of those children grow out of the dalliance—a fact that is not acknowledged in the report, which is focused on apprehension and prosecution.

The Mississippi Department of Corrections also participated in the study, providing a clue that many gang experts warn about—many leave prison a more hardened gang member than when they went in, and return to communities and commit worse crime. And much gang activity is run from within state and federal prisons, where cell phones tend to be readily available, even as drug and other rehabilitation are scarce.

"The Mississippi Department of Corrections determined that 62 percent of 19,150 inmates incarcerated as of December 14, 2017, have been identified as an active gang member in their facility," Hunter told lawmakers.

A graphic near the end of the report shows the breakdown of "offenses committed by validated gang members released from MDOC in 2017: 816 percent committed crimes against property; 814 percent drug offenses; 488 percent crimes against persons; and 217 percent other offenses.

The study did not hide its apparent intended usage as a support document for the new expanded gang law that would make it easier to send alleged "gang" members of various kinds to prison and for longer periods of time: "The draft bill creates the crime of criminal gang activity and addresses the problems associated with juvenile recruitment, youth gang members, the organized 'money men,' gang tactics, and allows the use of a statewide Grand Jury. It would further mandate statutory minimums for criminal gang activity and require the penalty for the crime to run consecutive to the underlying felony."

Multiple studies, however, find that gang members who go to prison re-commit crimes at a higher rate when they leave than do other inmates. In Illinois, the state where several large gangs represented in Mississippi (whether connected or through copycat groups) originate, researchers found that later gang activity grew more likely when the suspects were behind bars. "By the end of this period, 75 percent of the gang members had been rearrested for a new offense, compared with 63 percent of the nongang members. Gang members tended to be rearrested sooner after release than the nongang members," the report found.

The BOTEC report warned about the lack of re-entry strategies for former gang members and other criminals—which the Legislature seems to be dragging its feet on even as it tries to expand gang enforcement. BOTEC also warned in its "Gang Violence Assessment" report on Hinds County that keeping suspects in pre-trial detention in local jails is exposing them to gang activity, while warning about perceived corruption within the system, including prosecutors' offices and halfway houses.

"Correctional facilities are roundly criticized. Participants told us that those released or paroled from prison are bused directly to downtown Jackson without a reintegration strategy, which strains resources and increases the incidence of violent crime. Assessment participants described 'convict leasing scams' in which parolees are placed in halfway houses and required to work in state-supported programs, with wages being paid directly to the halfway house."

Where are the Hate Crimes?

In a state with strong Aryan Brotherhood and other white-supremacist gang activity as close by as Rankin County, Rep. Adrienne Wooten, D-Jackson, asked why hate groups are not specifically listed in the legislation. Hunter noted that the definition of criminal gang activity would encompass hate crimes, and later the committee adopted an amendment from DPS to include groups with "shared beliefs" to the definition of gang.

"While I understand that you feel that the language does include hate groups, you know for yourself that when you're sitting or standing before a judge, a judge interprets things, and generally they interpret it literally, in other words if the wording is not in the bill, then many of them will say well, they didn't include it," Wooten said, as she considered offering an amendment to add the language.

Gipson opposed Wooten's amendment argued that the only way to add hate crimes to the bill would be to add an entire list of every crime statewide.

"The only way we could deal with that is to include every code section in that set of books over there of every crime in the state of Mississippi," Gipson said, motioning to a shelf full of law codes.

The "Anti-Gang" legislation actually goes further than state crimes, however. Gipson later noted that the bill covers all crimes, both state and federal.

"Everything is covered, if it's a crime in a state of Mississippi, if it's a federal crime or a crime in any other state, because you have these gangs working across state borders," Gipson said. "So this is already covering every crime, and I think it's satisfactory."

The bill, however, is not designed to prevent gang activity, only to make it easier to send away anyone associated with a vast array of large or small gangs and groups. It shows no consideration of a recent BOTEC Analysis study of Jackson crime—one of the primary areas the fusion report identifies as a hotbed of gang activity—that warns that one of the top two precursors of whether a young person will later commit more violent crime is putting him or her into a police car or jail.

The Legislature paid $500,000 for the analysis, which did not sugarcoat the realities of crime and gangs, while probing for causes and solutions. BOTEC recommended a variety of solutions that do not necessarily involve sending gang members to gang-packed prisons that can, in turn, send more danger back into communities when they're released.

Instead of massive policing sweeps that cast a wide net, BOTEC recommended targeted actions such as the Operation Ceasefire model, which seeks to help gang members as well as threaten tough criminal sentences. In addition, BOTEC called for "holistic" community responses to gang violence and a rejection of "suppression-only strategies" that the new gang bill would make easier to employ.

"There are groups like the Urban Peace Institute that work with criminalized or gang involved youth to help turn them away from destructive behavior and engage in productive and socially appropriate behavior," BOTEC researchers wrote.

"They have had success nationwide in designing programs that acknowledge that there are certain children that are unwanted by much of society and deal with the issue directly and professionally. They create Comprehensive Violence Reduction Strategies to humanize at-risk youth and tackle the origins of and problems their behavior is causing. They also take a 'public health approach (that) rejects suppression-only strategies that fail to address the underlying community conditions spawning gangs and violence.' This model advocates for a wrap-around solution for each affected community."

The Homeland Security gang-assessment report gives lip service to prevention in its last two sentences, asking "What prevention programs are in elementary and/or middle schools to offset the recruitment of youths into gangs?" and "What methods do mental health facilities have in place for monitoring the gang presence in their facilities?"

The Mississippi District Attorneys Association and Police Chiefs Association support the new gang legislation, Gipson said, and he noted that DPS and Homeland Security have both reviewed it. He also said the governor supports the bill.

After 20 minutes of discussion, the bill passed with the majority of the committee voting "yay" and Wooten voting "no, no, no." The bill now goes to the full House for a vote.

Read more about preventing violence and crime at jfp.ms/preventingviolence.