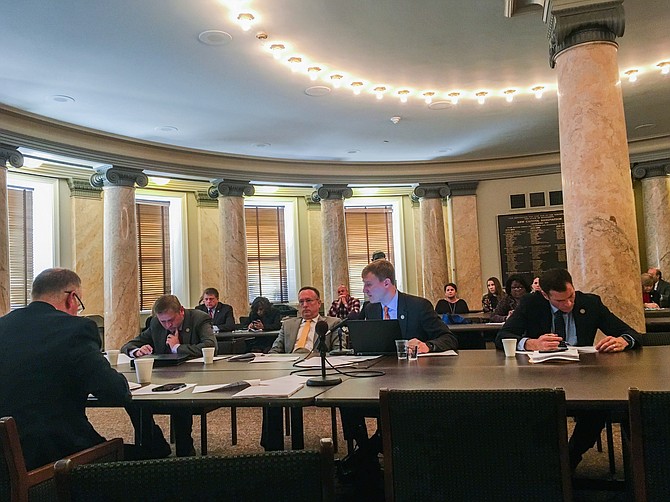 Bomgar introduced House Bill 942, which picks up several pieces of the state Re-entry Council's suggested reforms that were left on the cutting-room floor last year. Among other things, the bill would make it easier for men and women coming out of custody to get a driver's license after their first interactions with the criminal-justice system, establish parental accountability courts to keep families together and keep parents from going to jail for being unable to pay child support, and allow judges to modify sentences.

"This bill focuses on employability and re-entry," Bomgar told the House Corrections Committee on Wednesday. "(From) getting people back on their feet to getting them jobs so they won't re-offend."

The bill proposes adding these reforms to state law, and Chairman Bill Kinkade, R-Byhalia, said he had several problems with it. Rep. Mark Tullos, R-Raleigh, asked about a part of the legislation that would give employers who hire a person with criminal history limited liability.

"My concern is we're creating a protection or an exemption for the employer," Tullos said. "... But just because the employer hires them, we shouldn't give them some type of exemption from liability."

The chairman reiterated his concerns.

"I see several problems with this," Kinkade said. "... So I think we're still not ready."

Bomgar said he was open to editing out problematic sections, and when it became evident that the legislation's fate was questionable, he asked the chairman to at least keep the part of the bill that dealt with driver's licenses.

"Mr. Chairman, would you be open to deleting the problematic sections, especially the driver's license section?" Bomgar asked. "Just in talking to several people, that continually comes up as a significant barrier to people getting back on their feet."

Kinkade recognized Rep. Charles Young, D-Meridian, to enter a "motion to table," subject to call, instead, essentially killing the bill.

The committee passed several other housekeeping bills that extended the life of the parole board and other programs. The committee also passed a measure that would allow men and women convicted of a crime of violence to be eligible for parole after serving 50 percent of their sentence.

The House Corrections Committee passed House Bill 950 on to the Judiciary B Committee on Wednesday, which changes state law to conform to the Supreme Court's ruling on juvenile offenders.

The U.S. Supreme Court ruled in the Alabama v. Miller 5-4 decision in 2012 that minors cannot be sentenced to mandatory life in prison without parole if convicted of capital murder, as the court said such a sentence violated a minor's Eighth Amendment rights.

Juvenile offenders, who are 18 years old or younger, convicted of capital murder must serve a minimum of 25 years in the state's custody but not more than 50 years. The legislation says juvenile offenders convicted of capital murder "may be sentenced to life imprisonment," but then goes on to set sentencing limits if they are not sentenced for life in prison.

The bill also clarifies that juvenile offenders cannot receive death sentences. The legislation would be retroactive, applying to all arrests and convictions regardless of the date they occurred.

Clarification: This story has been updated to reflect that the Alabama v. Miller decision prohibited minors from being mandatorily sentenced to life in prison without parole. Email state reporter Arielle Dreher at [email protected].