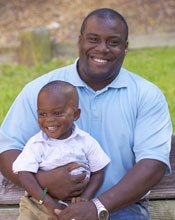 DeSean Dyson planned on being a lawyer. Less than a year before he graduated from college, however, Hurricane Katrina struck. His TV screen filled with negative images of young black men in New Orleans.

"As I saw those images, it kind of made me question, 'Man, is this how people see me?' And I imagined if I felt that way as a 22-year-old honors student, that a 15-year-old who saw the same thing had the same struggles," Dyson says.

He wanted to contribute a positive self-image to young people and set their expectations for themselves higher. Dyson says a lot of young people of all races have a false image of what it's like to be an adult--some see tough guys who get rich selling drugs, but who aren't beneficial to society.

"I think we have to rewire that thought process in young people--this isn't what it means to be a productive citizen," he says.

After his post-Katrina revelation, Dyson, now 28, turned to education--teaching U.S. history and government and coaching football at Clinton High School.

He starts his lessons on the economy with a story about another flood--a river in 1870 that overran its banks. "The president doesn't send any help," he tells his students. "How does that make you feel?"

After their initial outrage, Dyson talks about how the government's responsibilities have changed over the years, and how different philosophies of government play out in today's political debates. "As times have changed, what's the responsibility? Is there a minimum standard of living that people should have?" he asks, challenging his students to weigh reducing the deficit against caring for families who have lost jobs in the recession.

"The economy affects (my students), because they see the job market shrinking," he says. "We study about the Depression, and they say, 'Hey, could this happen again?'"

Next year, Dyson will turn from teaching to administration, his long-term goal. He is the new assistant principal of Carver Middle School and Raymond Freshman Academy.

A native of Jackson, Dyson attended Clinton High School and has lived in the area his entire life, except for two years at Mississippi Delta Community College. He received his bachelor's degree from Belhaven University in 2006 and his master's in educational leadership from Mississippi College in 2011. He now lives in Jackson with his wife, Alycia, and their son, Christian, who is 3. They are also expecting a daughter, Avery.

As a father, Dyson says he wants to teach his son the responsibility that will serve him well when he is an adult. Because of his Christian faith, he tries to focus on the "eternal things" that will matter a long time from now.

"In 50 years, I'm not going to remember what kind of car I had or how nice my clothes are, 'cause they're not, but I'll remember that my son would just see me and smile, or he would laugh," he says. "That kind of stuff stays with you."