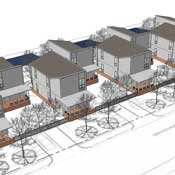 Can a window save a life? How about a window with no one behind it? No question, say environmental architects and security experts. A window can stop crime simply by where it is placed, even if no one is looking through it. It can and does still function as a set of "eyes," sending the message to would-be criminals that someone might see them. It's the most basic kind of deterrence.

The doyenne of urban planning, Jane Jacobs, first used the phrase "Eyes on the Street" in her seminal 1961 book, "The Death and Life of American Cities"—which has become a bible of sorts for smart city planning. Her ideas were picked up and expanded on by Oscar Newman in his own now-classic urban-design book, "Defensible Space: Deterring Crime and Building Community," written in 1970.

These visionaries' first piece of neighborhood advice is deceptively simply: "In order to discourage crime, a street space must be watched over by buildings with doors and windows facing it," write Andres Duany and the other authors of "Suburban Nation: The Rise of Sprawl and the Decline of the American Dream," in a section dedicated to the security ideas of Jacobs and Newman. "Walls, fences and padlocks are all less effective at deterring crime than a simple lit window."

This sounds simple, but take a look at most streets in Jackson, especially but not only in crime-plagued neighborhoods (or those that may well soon be). Few windows actually face the streets, or even the driveway or carport where dangers might await. Or the windows are covered with blinds or heavy curtains. As a result, a would-be criminal isn't threatened by the idea that someone just might be on the other side. Not to mention, many homes in more well-to-do areas are hidden behind walls that actually give criminals a place to hide.

This is only the most basic principle behind "defensible space." In his original book and a 1996 follow-up, "Creating Defensible Space" (download free at defensiblespace.com), Newman shares research showing that similar people from the same background can behave differently in different housing and living designs. It's really all about who controls behavior and whether the atmosphere is conducive to crime or not. That is, "Although the socioeconomic characteristics of the residents exert a strong influence on crime rate, the physical characteristics of the buildings and the project can exert a counteracting influence. The physical form of a residential environment can, in fact, ameliorate the effect of many of the problems created by the concentration of low-income, one-parent families with teenage children," Newman wrote in 1996.

Sadly, "Defensible Space" principles are often the exact opposite of a neighborhood or a home's reality, or what people think they need to be safer and happier. It is all about empowering individuals to make their own streets and homes safer, because police cannot do that for you. In fact, Newman's first sentence in his original book is a blunt warning: "The crime problems facing urban America will not be answered through increased force or firepower."

It's up to you to take control and make your neighborhood more defensible, in small and larger ways. In fact, Newman's principles spawned an entire new approach to security, called "Crime Prevention Through Environmental Design," or CPTED in security circles.

Face Block=Shared Street=Safer
Don't downplay the importance of street space to the formation of society. Studies show that a community hierarchy includes the shared street as a key component to a strong, and safer, neighborhood. If you live on a street where people seldom walk and commune together in shared space, you're in the middle of a breeding ground for crime. Beware.

CPTED Talk: 4 Principles (More info: http://www.cptedsecurity.com)
Natural Surveillance
People in safer communities strive to "see and be seen." They don't hide out behind shuttered windows praying not to be a crime victim. Lighting and landscaping are key components.

Natural Access Control
CPTED uses fences, lighting, walkways, paths, signs and landscaping to help guide people safety from their cars to their entrances. The idea is not just to keep the bad guys out, but to create a healthy flow while making it less appealing to criminals.
Territorial Reinforcement
"Defensible space" designers create a "sphere of influence" with physical design such as pavements, signs and landscaping that help residents feel that they control their own space. Public and private areas are clearly separate, thus discouraging trespassers.

Maintenance
You can get excited and do all of the above, but it won't matter if it's allowed to fall part. The "Broken Windows Theory" contends that one broken window or other dilapidated element leads to the decline of an entire street or neighborhood, and thus more crime.

When (re)designing a community:
• Group dwelling units to reinforce associations of mutual benefit.
• Delineate specific paths of movement.
• Juxtapose activity areas with internal living areas.
• Provide natural opportunities for visual surveillance.
• Subdivide residential environment into zones that residents feel they "control."
• Position windows, especially in multi-home dwellings, so residents can survey exterior and interior areas.
• Locate developments near activities that do not provide additional threat (or clean those areas up).

DIY: "Defensible Space"
• Be nosy (within reason): Adopt an attitude of looking out for your neighbors.
• Uncover your windows.
• Offer to assist strangers in finding their way (a good way to "investigate" them).
• Know who lives on your street—and who doesn't.
• Be willing to glance questioningly from your window.
• Encourage neighbors to call the police and each other about suspicious activity.
• Don't hide in your house; get out and walk, bike, run; go in groups first if you want.
• Have a stoop or porch out front and use it.

Skinny Streets
Safe streets have lots of people on them, and people don't want to be hit by speeding cars (neither do pets). A major way to calm traffic is with skinnier streets.

The Portland, Ore., fire chief helped start a program called "Skinny Streets" there. It recommends that new residential streets have parking on one side—and only be 20 feet wide, which "Suburban Nation" authors call "humane streets."

This may sound too narrow for two-way traffic, but it was designed on the city's existing streets in "good" neighborhoods. People slow down on these streets, thus making it easier for walkers, joggers, cyclists, pet-walkers and parents with strollers.

This is much more effective than speed-limit signs—and discourages criminal activity, as active streets always do.