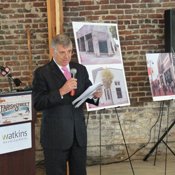 David Watkins is asking the city for $8 million in bond money to finance renovations on Farish Street.

City Council members questioned Farish Street developers about their request for $8 million in bonds during a work session this morning.

The Farish Street Group, which is developing the area, is requesting $8 million in urban renewal bonds from the city to finance renovations on the first block of the historic district. City Council members will vote tomorrow on whether to begin the process to expand an urban renewal area to include the Farish Street Entertainment District. This would allow the Jackson Redevelopment Authority to take out bonds for the development.

The City Council has already begun the process of creating an urban-renewal area around the site of the proposed convention center hotel.

During the work session this morning, board members asked David Watkins, manager of the Farish Street Group, who would pay back the bonds if the entertainment district does not bring in as much money as developers hope.

Ward 2 Councilman Chokwe Lumumba asked if there would be any agreement similar to the one the city has with the convention center hotel developers in which the city and the developers each agree to accept 50 percent responsibility in case of default.

Watkins said they would pay the $8 million back out of lease revenues they plan to collect from clubs on Farish Street.

"We're working with JRA now, and we're providing the data that they need to make sure that this is a good deal, that the money is going to be there and this is not going to be a financial problem for the city or JRA," he said.

Lumumba also defended the council's interest in the project, despite the fact that the city has not yet given any money to the developers. JRA owns the property and has leased it to developers, but JRA is an arm of the city.

Watkins said eight people or companies have signed leases for the buildings, and he and other developers have invested a significant amount of their own money into the project, but the downturn in the economy has made getting funding from other sources difficult.

The council will vote tomorrow on sending a proposal to expand the urban-renewal area to the Planning Commission.