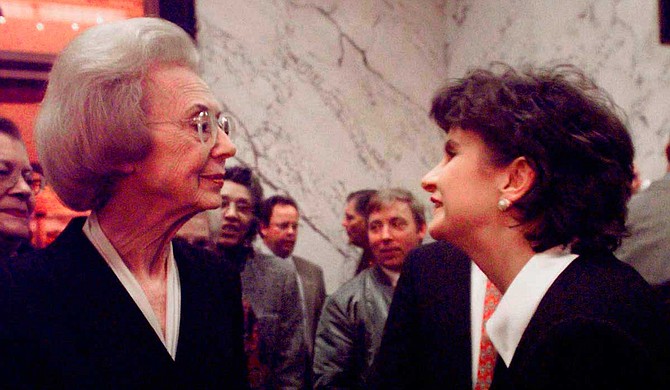 Former Lt. Gov. Evelyn Gandy greets Amy Tuck shortly after her 1999 election as lieutenant governor at a reception in the Mississippi State Capitol on Jan. 6, 2000. Tuck is one of just three women to hold statewide office since Gandy first broke the barrier in 1959. The third is current state Treasurer Lynn Fitch. Photo by Rogelio v Solis via AP

One day in fifth grade right at the dawn of the 1930s, Evelyn Gandy's teacher at her Hattiesburg elementary school posed a question to the class: "What do you want to be when you grow up?"

The girl eagerly raised her hand, and her teacher called on her.

"I'm going to be a lawyer," Gandy declared to the class.

Gandy's teacher laughed, joined by the other girls and boys in the class.

At their Hattiesburg home later that afternoon, her father, Kearney Gandy, noticed his daughter moping.

"Evelyn, what's wrong with you?" her dad asked.

She told him. Then, he picked her up, sat her on the edge of the dining-room table, and knelt down so that, as she looked down upon him, he was looking up at her.

'A Giant' of State Politics

On June 11, Mississippi Bar Association President-elect Jennifer Ingram Johnson shared that story, which Gandy told her years ago, at a luncheon in Hattiesburg.

"Evelyn Gandy is a giant in the history of Mississippi politics and Mississippi women," Johnson told the crowd, who were there to celebrate the 100-year anniversary of the U.S. Senate's passage of women's voting rights.

In the years after Gandy's father sat her on that dining room table, she did go to law school. Not only was she the only woman in her class at the University of Mississippi School of Law, but her classmates elected her as the first female student-body president in the school's history. After law school, voters elected her to the Mississippi House of Representatives in 1948 and then chose her as state treasurer in 1959. That made her not only the state's first woman ever elected to statewide office, but the most powerful in the history of Mississippi politics.

Then, in a historic state election in 1975, Mississippi voters selected Gandy as lieutenant governor—a powerful position because lieutenant governors also serve as the president of the Senate, giving them the ability to control much of the legislative agenda. Around the Capitol, the almost all-male press corps referred to her simply as "The Lady."

For all of her success, though, Gandy could not break Mississippi's highest glass ceiling; twice, she lost bids for governor against less-qualified men. Pete Smith, an associate professor of mass communication at Mississippi State University who has studied media coverage of Gandy's political career, told the Jackson Free Press that a lot of it had to do with the way the press covered her.

For research for a study in 2017, Smith examined more than 2,000 press clippings from the Evelyn Gandy Collection housed in the McCain Library and Archives on the campus of the University of Southern Mississippi.

Time and again, Smith found that reporters framed her in sexist ways that treated her as an oddity or that seemed intended to diminish her accomplishments. Two years after voters first sent her to the House, her hometown newspaper, The Hattiesburg American, labeled her as "Forrest County's blonde, slender lawmaker" in a story about her efforts to reform adoption laws.

The Greater Jackson Advertiser-TV News also wrote patronizingly about her in late 1959 after voters elected her as state treasurer. "Upon the head of this competent, well-trained and attractive young woman falls an enormous responsibility," the report read.

"Women are consistently framed by their image, and men are framed by the issues," Smith told the Jackson Free Press on June 13.

In February 1960, the Jackson State Times' Cal Turner introduced her to readers this way: "Who's that girl? Man, that girl is Evelyn Gandy. ... She looks right fetching. Tall, graceful, and quick to smile. Lots of brown hair that cascades from ear to ear. Hard to believe that she is immersed somewhere in the state's money matters."

Gandy, Turner continued, looks like someone whose day should be "arranged to sonnets and symphonies instead of an adding machine."

Then, in 1976, during Gandy's first year as lieutenant governor, a male reporter for the Tylertown Times called her a "gentle and soft spoken lady." A 1978 editorial in the Jackson Daily News praised her spotless political image with a sexist simile, writing that she "kept her skirts as clean as Purex." When Gandy made her second run for governor in 1983, The Jackson Clarion-Ledger's Jack Elliot described her as greeting voters with "Southern belle-ish daintiness."

Though nearly four decades have passed since that bid ended her political career, Smith said that the media still frame women in politics similarly.

"The problems Gandy faced are the same problems Hillary Clinton faced in 2016," he said.

Like Clinton, Smith said, Gandy was one of the most experienced candidates ever to run for the office she sought. In fact, he said, Gandy's qualifications likely surpass those of each of the men running for Mississippi governor in 2019.

Just as 2016 press coverage could be critical of Clinton for her perceived "inevitability," a 1979 editorial poem in the South Mississippi Sun mocked Gandy's style and her prospects in that year's gubernatorial race.

The very thing that made Gandy palatable to enough male voters to win office in the 1950s, '60s and '70s, Smith said, worked against her when she sought the highest office in the state.

"Gandy fell victim to her own socialization," he said, referring to the fact that she did, indeed, exhibit the ladylike disposition society expected of women of her generation, eschewing aggressive and dirty political tactics.

"She presented herself as a southern lady, and that image sustained her for a long time because she wasn't seen as a threat to the state patriarchal order, and she was having just enough success to be a state curiosity," he said.

When it came to the top job, though, some media outlets perhaps read their own biases into her.

"The oldest and meanest problem for Miss Gandy, one which persisted in whisper campaigns, is that a woman cannot handle the job for governor," read an editorial in the Wayne County News in 1983—the year of her second run for governor.

She lost that race to then-Mississippi Attorney General Bill Allain by a 52-48 margin. Allain went on to win the general election despite a scandal involving claims he had paid three Jackson-area male prostitutes, described as "transvestites" in press reports at the time, for sex. After the election, the men recanted, claiming a Republican Party-affiliated group had paid them to make the claims. GOP leaders denied it.

The fact that Allain could withstand those accusations and win, though, while Gandy could not withstand the perception that she was too ladylike for the top job, illustrates the environment Gandy faced, Smith said.

"She took it on the chin for being that stereotypical southern lady," he said, calling it a "double-edged sword."

Despite that, Johnson told the Jackson Free Press at the luncheon in early June, Gandy never complained about the sexist double standards she faced.

"I have never heard her say anything disparaging about her opportunities or any of her experiences, because she saw everything as an opportunity to move women forward," Johnson said. "So even in the times when she had to work a little bit harder than some of the men may have, I think she really enjoyed that and recognized that it was necessary to move women forward, and she just took on the challenge with great grace."

After her death, former Gov. William Winter, who beat her in the Democratic primary for governor in 1979, extolled her decades of service.

"I had the advantage in the Mississippi politics of almost 30 years ago of being a man who ran against a woman," he said, delivering her eulogy. "I would hope that advantage would not exist today and if it does not, it is because Evelyn Gandy has blazed the trail."

In 2002, Gandy shared her thoughts with the Hattiesburg American about being a woman in politics. "We're not trying to be better than men; we're just trying to join them," she said.

November will mark 60 years since voters made Gandy the first woman to hold statewide office. Only three other women have done it since: former Lt. Gov. Amy Tuck; U.S. Sen. Cindy Hyde-Smith; and State Treasurer Lynn Fitch, who is a Republican candidate for attorney general this year.